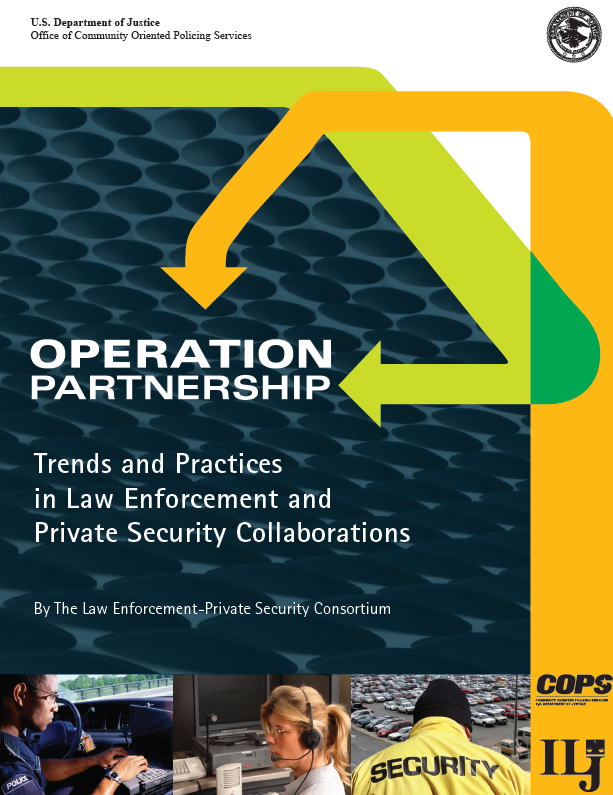 This report was produced to help law enforcement and private security organizations develop and operate effective partnerships. It provides guidelines and analysis—supported by examples from partnerships throughout the nation—of trends, innovative practices, obstacles, lessons learned, and results.

The law enforcement-private security (LE-PS) partnerships featured here were formed or expanded to address a range of critical needs: to avert or respond to a terrorist attack, support urban downtown revitalization, marshal resources to combat financial crimes, compensate for law enforcement budget cuts, improve safety at special events, improve security for the nation’s infrastructure, and bring community policing approaches and new resources to bear on crimes against residents and businesses. Many of the partnerships have been able to measure success not only by meetings and exchanges of information but also by crimes prevented and solved.

Collaboration by its definition extends the concept of cooperation to emphasize benefits
for all parties and, in the case of LE-PS partnerships, the public as well. Partnership
benefits begin when individuals in both private security and law enforcement find they
can do their jobs more efficiently or effectively because of the professional contacts they
have made. The advantages multiply when the partnership as a group builds trust, takes
on specific objectives, and experiences success as a result of joint efforts.

For both private security and law enforcement, new professional contacts are among
the first partnership benefits experienced. The partners identify who can get what done
in their respective areas of responsibility and may develop inventories of specialized
skills—in languages, for example. Some security directors also report that at the field level,
security officers’ increased contacts with law enforcement have a positive influence on
their confidence. Law enforcement, in turn, may come to appreciate the “extra eyes and
ears” they gain by working more closely with private security officers. Finally, individuals
may gain career opportunities through LE-PS partnership contacts.

The 9/11 Commission confirmed just how dependent the nation is on private security,
noting that the private sector owns about 85 percent of the nation’s infrastructure—
buildings, power plants, utilities, transportation systems, communications networks. At
least 2 million persons are believed to be employed in private security in the United States. Overall,
this is roughly three times the number of state and local law enforcement officers, but the private
security-to-law enforcement ratio is much higher in certain areas, such as major cities’ business
districts. Minneapolis SafeZone Collaborative–Downtown partners, for example, suggest the
ratio may be as high as 13 to 1 in downtown Minneapolis.

Viewing private security as a force multiplier does not mean ignoring the differences between police and private security in legal authority,
training, or accountability. Rather, it acknowledges the following:

Private security works in certain critical areas that law enforcement simply cannot
cover because it lacks the human resources, mandate, or technology.
Private security is a growth industry, whereas the number of sworn local and state
law enforcement officers is not projected to grow significantly in the future.
The most recent U.S. data on employment in local and state law enforcement show that
2000 through 2004 was a period of slow growth overall. The number of sworn officers
decreased in 20 of the nation’s 50 largest police departments, including six of the seven
largest. The New York City Police Department saw a 10.7 percent decrease in sworn
officers, with even greater declines in Newark, New Jersey (down 11.4 percent); Cleveland
(down 14.4 percent); Nassau County, New York (down 15.3 percent); and Detroit (down
15.5 percent).

The combination of increased demands and stagnant or declining local law enforcement
resources makes it clear that, now more than ever, law enforcement agencies must pursue
all reasonable avenues for collaboration with private security, as well as with each other.

At the field level, private security has the potential to reduce the cost of public law
enforcement, which is expensive for taxpayers. In Las Vegas, Wilmington (Delaware),
Minneapolis, New York, and other cities, for example, law enforcement’s ability to view
private security closed-circuit television (CCTV) cameras has the potential to save taxpayer
money that would otherwise have been spent to buy this equipment. Another example is
the use of private transit security officers on public transit systems, as in Durham, North
Carolina, and in several counties in south Florida.

Today, many types of crime are computer crimes16 because they can be, and often
are, assisted by computer technology. Nearly every component of a law enforcement
organization is affected, whether it deals with child exploitation, identity theft, street
gangs, terrorist organizations, laptop theft, cyber attacks on corporate or government
networks, or Internet safety presentations in middle schools.

The interdependence of law enforcement and private security in this field is apparent at
the local, national, and international levels. It is not simply a matter of law enforcement
lacking enough personnel with the skills to address high-tech crimes. Even experts
whose careers are dedicated to computer security are hard-pressed to keep up with
cyber attackers, many of whose methods have become “similar to traditional software
development and business practices.” Some of these criminals are not just staging
computer attacks but selling do-it-yourself “attack kits” and “phishing kits” over the
Internet.19 Law enforcement needs private security’s resources to combat high-tech
crimes; and private security needs law enforcement’s legal authority and investigative
skills to pursue criminals whose attacks threaten the security of their networks and, in
turn, undermine public confidence in their companies.

Private security resolves unknown numbers of cases with no law enforcement
involvement when financial losses are below a certain threshold and neither the business
nor the public expects criminal justice system remedies. The petty thief or embezzler is
fired, for example, or the victim of credit card theft is reimbursed and issued a new card.
The criminals sometimes are not prosecuted, but victims are reasonably happy with the
immediate solution and law enforcement does not have to spend resources.