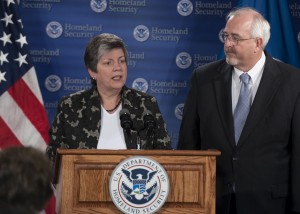 Secretary Janet Napolitano:  Pass ID is a bill that I support. The Department of Homeland Security (DHS) worked with governors and other stakeholders to provide technical assistance in its drafting and—so the approach that Pass ID takes to fix REAL ID is one that I support. I think it makes sense. This is an important piece of national security legislation that is designed to help fulfill the 9/11 Commission’s recommendation that the Federal Government set security standards for driver’s licenses.

As has already been commented upon, the first attempt to do this—the REAL ID Act—was a start that badly needs to be fixed. Pass ID is a fix for REAL ID. The states agree that REAL ID is too rigid and needlessly expensive in mandating how states meet their security goals.

We cannot have national standards for drivers’ licenses when the states, themselves, refuse to participate. Now, the practical problem with REAL ID is one of timeliness, and that sets the urgency for Pass ID. Because, under REAL ID—as of December 31st of this year—states are required to attest that they are implementing REAL ID for their driver’s licenses so that they can be accepted for things like boarding a plane.

Chairman Lieberman: So—if I may interrupt you—that means that assuming nothing else happens in between—that it is—under the law, the driver’s licenses issued by the states would not be accepted by the Transportation Security Administration (TSA) to gain passage.

Chairman Lieberman: In other words, the kind of secondary screening that goes on now—if for some reason you forget your license or something—that would have to happen to everybody.

Secretary Napolitano: And—so that sets the urgency for REAL ID—and why I’m so appreciative—or  Pass ID, excuse me—why I’m so appreciative that the Committee has scheduled this hearing today and is moving forward. I am very pleased to be sitting next to Jim Douglas—my good friend—the Republican Governor of Vermont. He is the incoming chair of the National Governor’s Association. Later, you will hear from Sheriff Lee Baca of Los Angeles on why law enforcement supports Pass ID.

Now we get to the fundamental reason why we have these laws in the first place. We go back to the 9/11 Commission report. We need secure identification to thwart potential terrorists; law enforcement needs to have confidence that an ID holder is who he or she claims to be; and—as the 9/11 Commission report said—to terrorists, travel documents are just as important as weapons.

States vary widely in the standards they employ. Now the system is too open to fraud.  National standards are necessary, but national standards are embodied both in REAL ID and in Pass ID. Secure identification certainly won’t thwart every planned terrorist attack, but it can present an obstacle and give another counter terrorism tool to law enforcement that we need. Now—as has been mentioned—there are lots of similarities between REAL ID and Pass ID. The main similarities between the two are the physical requirements for physical security of driver’s license production.

The premises must be secure. A background check on employees must be conducted.  There must be fraudulent document training given to all employees involved in the process.

Requirement to show Pass IDs: At the end of the implementation period, non-compliant identifications would no longer be automatically accepted to board planes, enter nuclear plants, government buildings and the like.

Document validation: Both laws would require states to validate the legitimacy of the underlying source documents such as birth certificates or licenses from other states.

Further, under Pass ID, a requirement for electronic verification of Social Security Number and lawful status remains. Now, the differences: Why is this easier to implement from the state perspective?

First, Pass ID eliminates the blanket requirement to use untested technologies for electronic verification of any and all source documents. States still have to validate documents, but they can pursue different ways to reach that standard.

Second, they are required to electronically verify Social Security and lawful presence through the S-Solve and SAVE [Systematic Alien Verification for Entitlements] databases; but, unlike REAL ID, under Pass ID, they are exempted for paying the fee for doing those checks.

Third, there is greater flexibility under Pass ID. in terms of how you re-enroll existing driver’s license holders, because under REAL ID you’ve got to re-enroll everybody under the age of 50 three years earlier than everybody else. Under Pass ID we give the states flexibility on how to do the re-enrollment so long as everything is complete by 2016—which actually is one year earlier than the final completion date for REAL ID.

And, lastly—in terms of differences as has been noted by Senator Akaka—unlike REAL ID, Pass ID actually contains within it specific assurances that states and privacy advocates have sought for the protection of the information that is garnered in the process. So these differences—which are designed to make the goal of REAL ID a reachable goal and designed to move us toward reaching the goal of the 9/11 Commission report—these differences contained within Pass ID make it a bill that—if passed and implemented before Dec. 31 of this year—will fix a bill that was flawed from the outset.