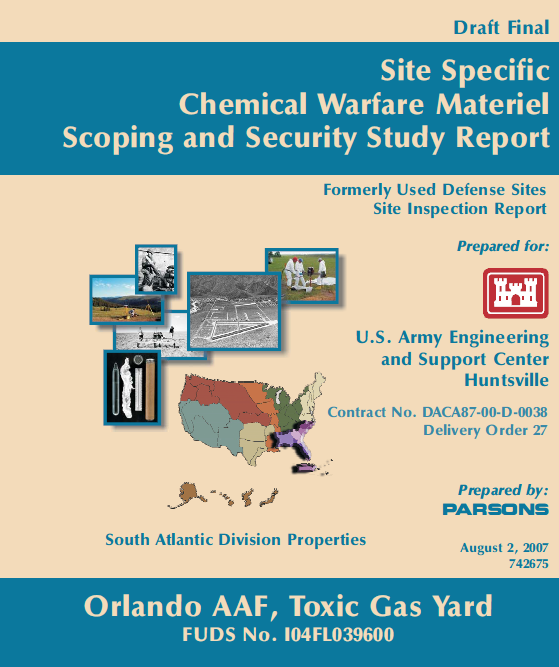 2.3.1.1. Between the period of 1943 through 1945, the United States acquired from
various owners, by condemnation and lease, a total of approximately 2,111 acres in
leasehold for the Orlando AAF, Toxic Gas and Decontamination Yard. A portion of the
site referred to as real estate tract 51 was improved with a roadway, ordnance storage
igloos, a storage warehouse, latrines, bleachers, and a few smaller buildings near the
center of the tract. A small arms range was also developed in the southern area of the
tract. The official start of operations at the former Orlando AAF, Toxic Gas and
Decontamination Yard is unknown. In June 1946, much of the Orlando AAF, Toxic Gas
and Decontamination Yard was declared excess except for six tracts of land and
approximately 40 percent of tract 51. These six tracts and the portion of tract 51 were
then referred to as the Pinecastle Army Air Field Ordnance Storage Area. In October of
1946, the Pinecastle AAF Ordnance Storage Area was declared excess. A document
entitled “Warning Notice” notes that effective December 2, 1946, the Orlando Ordnance
Storage Area, used by the AAF for a Toxic Gas and Decontamination Yard, was
classified as surplus. A Certificate of Clearance issued in February 1950 stated that all
land in tract 51, containing approximately 220 acres of the Toxic Gas and Decontamination Yard, had been given a careful visual inspection and was declared clear
of all dangerous and/or explosive materials reasonably possible to detect. It also
recommended that this land be used for any purpose for which it was suited.

2.3.1.2. The former Orlando AAF, Toxic Gas Yard is believed to be the source of
chemical munitions on planes flying out of nearby Pinecastle AAF and from planes
flying out of the Orlando AAF. A considerable number of demonstrations and tests were
held at the nearby Pinecastle Bombing Range, with more than one demonstration per
month in the first half of 1945. A Real Property Utilization Inspection Report dated April
10, 1946 refers to the installation as Narcoosee Road Toxic Gas and Decontamination
Yard of Orlando Army Air Base and lists the property size as 2,105.1 acres. The report
stated that the site was used for instruction and training and that demonstrations were
periodically given at the site. The report also stated that 2,000 square feet of closed
storage space was 100 percent utilized and that 5,200 square feet of igloo space was 100
percent utilized. The Archives Search Report contained no record of what type or types
of chemical munitions may have been stored at the site.

2.3.2.1. The U.S. Army Corps of Engineers Jacksonville District (CESAJ) prepared
an Inventory Project Report (INPR) for Orlando AAF in May 1993. This INPR included
performing real estate searches and historical background searches specific to Orlando
AAF in order to determine if the site was eligible under the FUDS program.

2.3.2.2. The U.S. Army Corps of Engineers, St. Louis District prepared an Archives
Search Report (ASR) for Orlando AAF, Toxic Gas and Decontamination Yard in July
1993. Preparation of the ASR included a site visit, research at various archives and
records holding facilities, and interviews with individuals associated with the site or
familiar with its operations. Particular emphasis was placed on establishing the chemical
agent or agents used at the site, the quantity of agent used at the site, and potential areas
of disposal at the site. The ASR findings are summarized in Section 3 of this document. 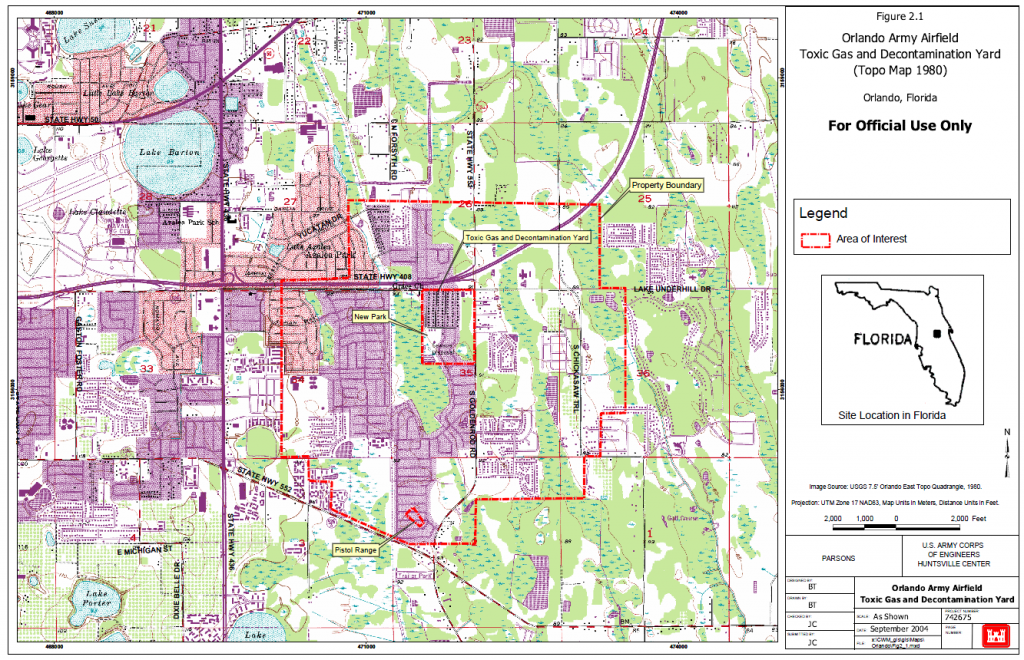 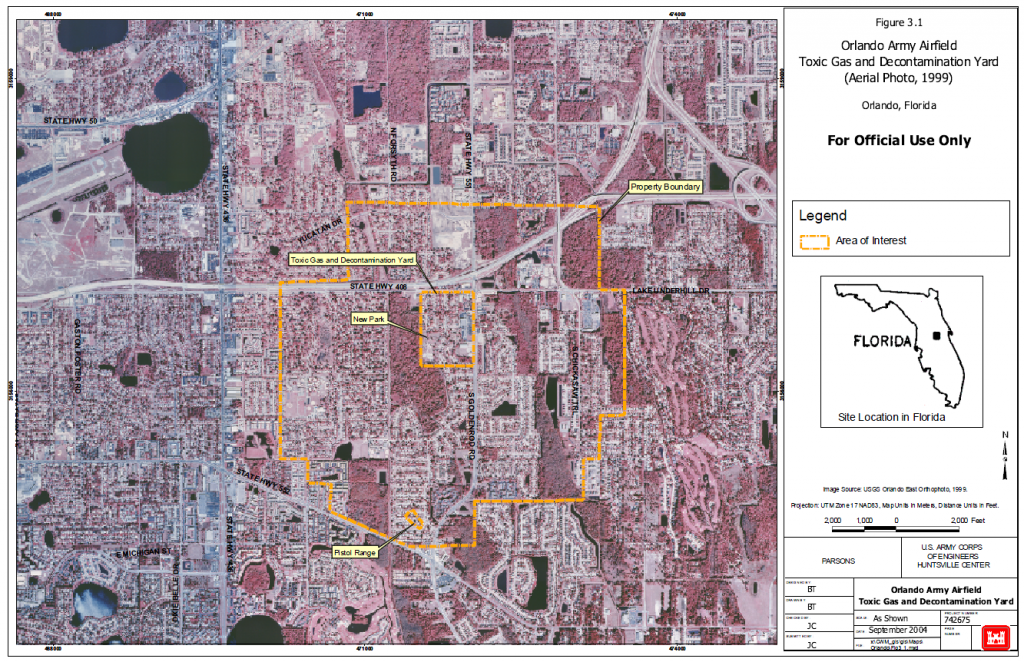 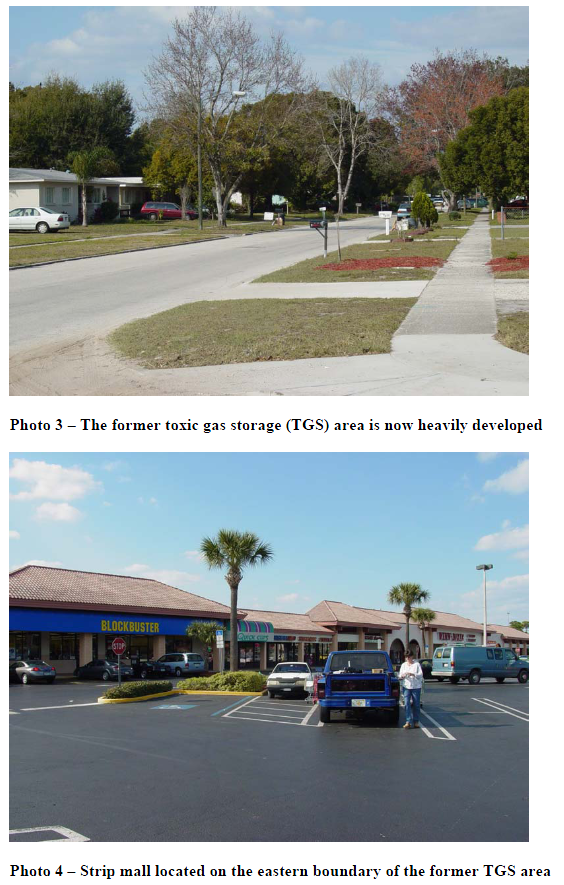