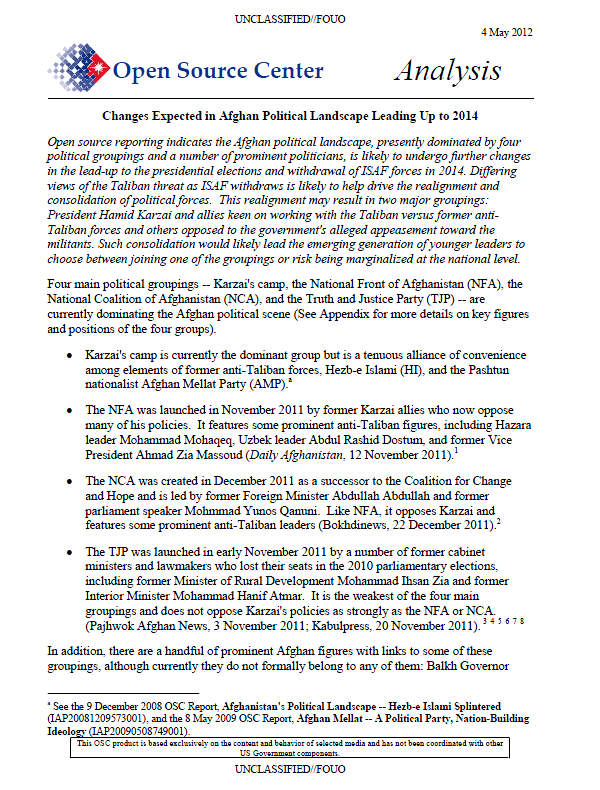 Open source reporting indicates the Afghan political landscape, presently dominated by four political groupings and a number of prominent politicians, is likely to undergo further changes in the lead-up to the presidential elections and withdrawal of ISAF forces in 2014. Differing views of the Taliban threat as ISAF withdraws is likely to help drive the realignment and consolidation of political forces. This realignment may result in two major groupings: President Hamid Karzai and allies keen on working with the Taliban versus former anti-Taliban forces and others opposed to the government’s alleged appeasement toward the militants. Such consolidation would likely lead the emerging generation of younger leaders to choose between joining one of the groupings or risk being marginalized at the national level. Four main political groupings — Karzai’s camp, the National Front of Afghanistan (NFA), the National Coalition of Afghanistan (NCA), and the Truth and Justice Party (TJP) — are currently dominating the Afghan political scene (See Appendix for more details on key figures and positions of the four groups).

In addition, there are a handful of prominent Afghan figures with links to some of these groupings, although currently they do not formally belong to any of them: Balkh Governor, Atta Mohammad Nur, Nangarhar Governor Gol Agha Sherzai, former intelligence chief Amrullah Saleh, Badakhshan MP Fawzia Koofi, Kabul MP Ramazan Bashardost, and Nangarhar MP Abdul Zaher Qadir.

Growing concerns about the Taliban threat and its role in post-2014 Afghanistan may consolidate the political landscape around two political, and possibly even militarized, rival clusters.

Should the NFA and NCA unify and attract major anti-Taliban leaders among Karzai’s allies, the remainder of the Karzai camp may rely increasingly on HI and some level of cooperation even from the Taliban to remain politically relevant. 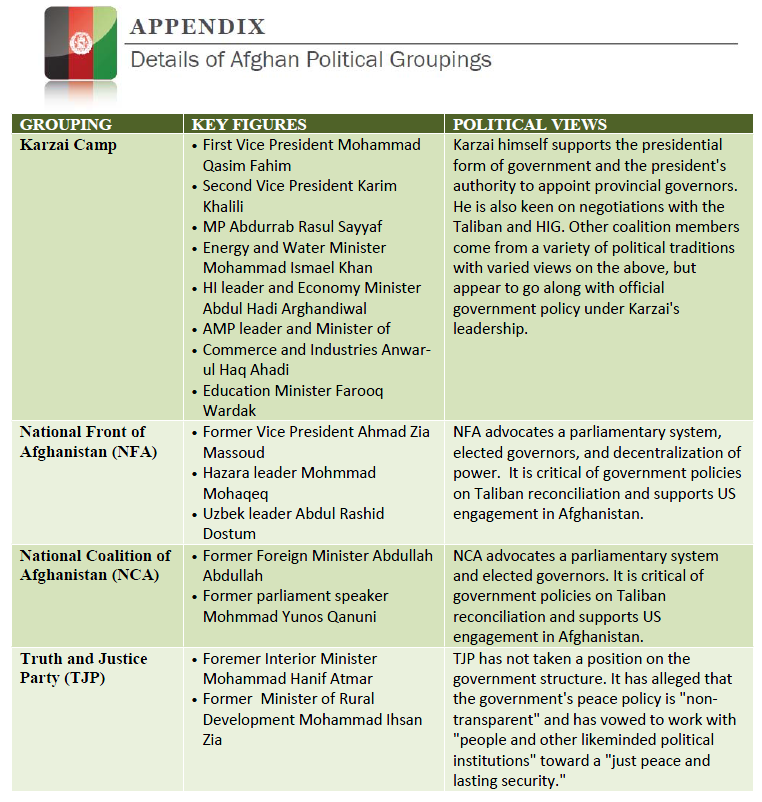