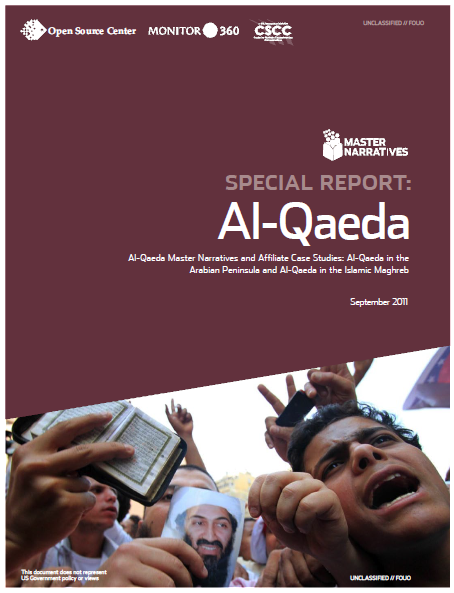 Understanding master narratives can be the difference between analytic anticipation and unwanted surprise, as well as the difference between seizing opportunities to undermine adversary messaging and letting those opportunities pass by. Master narratives are the historically grounded stories that reflect a community’s identity and experiences, or explain its hopes, aspirations, and concerns. These narratives help groups understand who they are and where they come from, and how to make sense of unfolding developments around them. Master narratives often emerge naturally over time as a community discovers and defends its shared identity. Governments, influencers, and non-state actors can also create master narratives in their efforts to persuade target audiences to support political platforms, reject opposing viewpoints, or take up arms for a cause. Like political, social, and religious leaders, violent extremist organization communicators promulgate their own master narratives in an attempt to discredit adversaries while attracting new recruits. Understanding these master narratives presents US communicators and analysts with the challenge of placing themselves in the mindset of an extremist communicator or sympathizer, and recognizing that foreign audiences may be susceptible to believing carefully crafted stories that—from an American vantage point—may appear conspiratorial and outlandish.

This report is part of a multi-phase effort spearheaded by the Center for Strategic Counterterrorism Communications (CSCC), Open Source Center (OSC), and Monitor 360: its objective is to use master narratives to reveal strategic communications opportunities that can help combat and undermine al-Qaeda (AQ) messaging. This report represents a first step in that effort by surfacing and articulating six critical AQ master narratives and detailing how those master narratives are used by two case study AQ affiliates: al-Qaeda in the Arabian Peninsula (AQAP) and al-Qaeda in the Islamic Maghreb (AQIM). This report follows a consistent structure for articulating these narratives, assesses how AQAP and AQIM communicators use them, and analyzes the dynamics and forces that might impact how these narratives evolve over time. For seasoned AQ experts, these narratives will already be familiar — the content contained in this report can be used to check assumptions, surface tacit knowledge, and aid customer communications. For newcomers to AQ messaging and counter-messaging operations, these narratives offer deep insights into the stories used by AQ communicators in their messaging and recruitment efforts. Following this study, two additional reports will surface and articulate the master narratives held by audiences in Yemen and Algeria — critical fronts for AQAP and AQIM, respectively. A fourth report will focus on opportunities for US communicators. The figure on the following page outlines how these reports combine to surface new, actionable opportunities for US communicators.

This report is focused on helping US communicators and analysts better identify opportunities to undermine AQ messaging. With this in mind, the report analyzes how AQ portrays itself and its objectives to the public through statements and multimedia releases – the messaging used to attract recruits, build public sympathy, and undermine adversaries such as the United States. Research for this analysis included AQ messaging dating back to 2000, with particular attention paid to recent messaging from 2009-2011. In addition to primary sources and open source research, interviews with 25 SMEs were used to surface master narratives, test hypotheses, and validate assertions. These SMEs were asked a combination of expansive, open-ended questions designed to surface new hypotheses as well as targeted questions designed to verify assertions. Combining these interviews with open source research, this report highlights how each master narrative reflects perceived history, themes, and objectives that are central to AQ’s public identity. Each of these master narratives appear with varied frequency across AQ messaging and propaganda, and collectively they represent a unified narrative system used by AQ and affiliate communicators.

This report is not a silver bullet: identifying and capitalizing on opportunities to undermine AQ messaging will continue to rely on the creativity and expertise of communicators and analysts confronted with complex mission goals, changing local conditions, and bureaucratic constraints. What this report can do is lay the foundation for systematically assessing how AQ master narratives and messaging align or conflict with existing local beliefs in strategically significant locations, such as Yemen and Algeria. The insights and analysis provided in this report serve as a first step in providing communicators and analysts with the resources they need to seize upon those opportunities. In doing so, they will be better equipped to augment US efforts to combat and undermine AQ messaging. 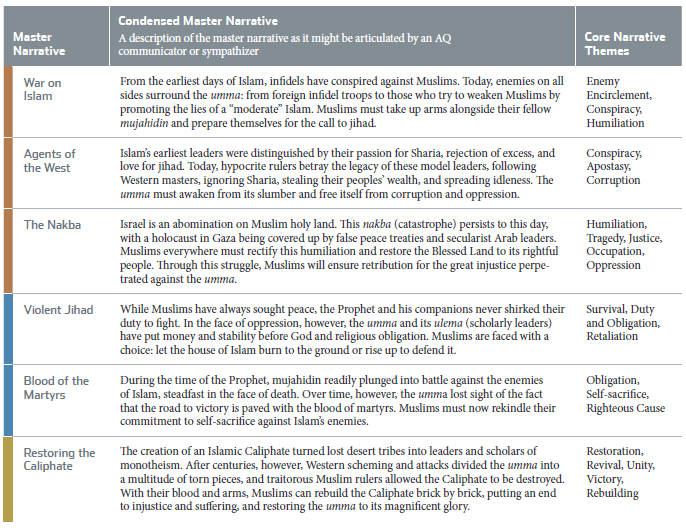