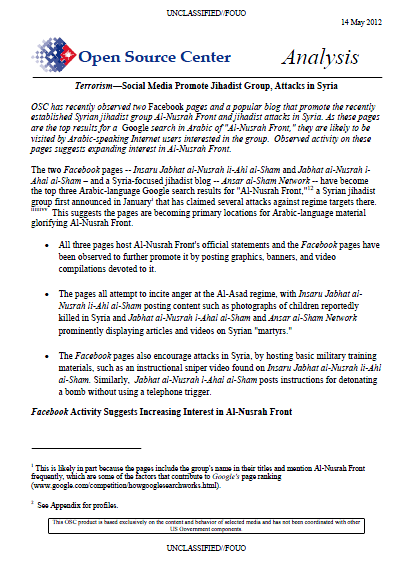 OSC has recently observed two Facebook pages and a popular blog that promote the recently established Syrian jihadist group Al-Nusrah Front and jihadist attacks in Syria. As these pages are the top results for a Google search in Arabic of “Al-Nusrah Front,” they are likely to be visited by Arabic-speaking Internet users interested in the group. Observed activity on these pages suggests expanding interest in Al-Nusrah Front.

Although, thus far, users have indicated approval of the Facebook pages — by clicking the “like” buttons — relatively few times, the trend is increasing, suggesting heightened interest in Al-Nusrah Front. Statistics on readership of the pages are not available.

The blog Ansar al-Sham Network reported between 33,000 and 78,000 views between 27 April and 5 May. Although it is not clear how the site calculates traffic, it appears to count visits on a daily, rather than cumulative basis. This high viewership offers further evidence of online interest in Al-Nusrah Front.