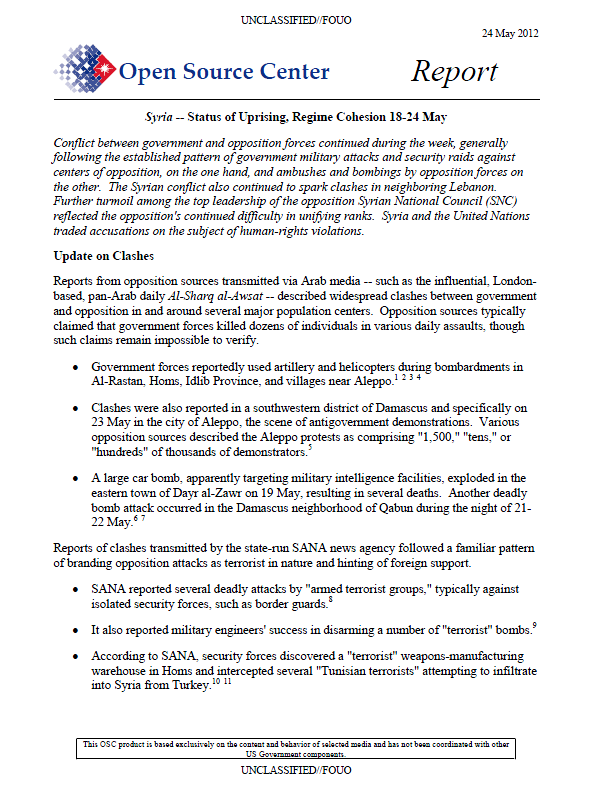 Conflict between government and opposition forces continued during the week, generally following the established pattern of government military attacks and security raids against centers of opposition, on the one hand, and ambushes and bombings by opposition forces on the other. The Syrian conflict also continued to spark clashes in neighboring Lebanon. Further turmoil among the top leadership of the opposition Syrian National Council (SNC) reflected the opposition’s continued difficulty in unifying ranks. Syria and the United Nations traded accusations on the subject of human-rights violations.

Reports from opposition sources transmitted via Arab media — such as the influential, London-based, pan-Arab daily Al-Sharq al-Awsat — described widespread clashes between government and opposition in and around several major population centers. Opposition sources typically claimed that government forces killed dozens of individuals in various daily assaults, though such claims remain impossible to verify.

Reports of clashes transmitted by the state-run SANA news agency followed a familiar pattern of branding opposition attacks as terrorist in nature and hinting of foreign support.

Clashes between pro-Syrian Government and pro-Syrian opposition factions continued in
Lebanon, and a number of Lebanese Shiites were abducted in Syria under unclear
circumstances.

The SNC formally accepted the resignation of Burhan Ghalyun, who had been reelected president on 15 May, and announced a new presidential election on 9-10 June. Ghalyun resigned under pressure from critics within the SNC who accused him of monopolizing power and failing to support properly the uprising.

In a report addressed to the UN Human Rights Council on 20 May, the Syrian Foreign and Expatriates Ministry charged that Syria is the victim of human-rights violations, both through “direct killing operations” by “armed terrorist groups” and through “the sanctions imposed by the countries, which are funding, backing, and hosting these groups.”

In a report released on 24 May, the UN’s Independent Commission of Inquiry on Syria charged that the Syrian Army and security services were responsible for most of the human-rights violations documented by the commission, both in the form of direct attacks against individuals and the “systematic denial” of food, water, and medical care.