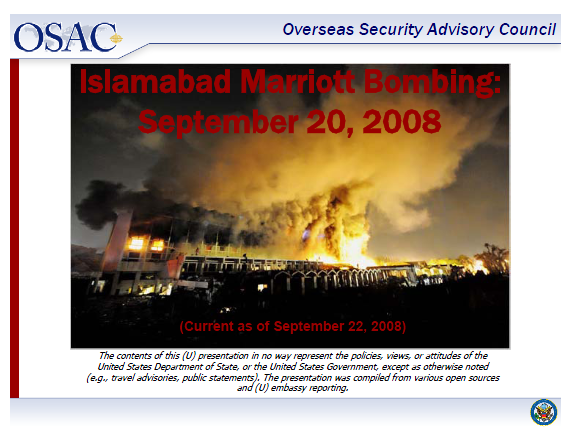 • At approximately 2000 local time, a dump truck rammed the security gate at the Marriott, Islamabad.
• While stopped at the gate, the driver exploded a suicide vest, lighting the truck on fire.
• Mortars, other explosives cook off for approximately three minutes, while security organizes and attempts to stop fire.
• Minutes later, the main explosive of about 600kg of RDX and TNT, combined with an aluminum powder to accelerate the flame.

Marriott Hotel Bombing
Timeline of Major Attacks in 2008
• January 10: Suicide bomber outside court in Lahore detonates explosive vest – 16 police
and three bystanders dead.
• February 9: An explosion at an election rally in northwestern Pakistan leaves 25 people
dead. The attack is believed to be targeting members of the secular ANP party, the leader of
which was assassinated two days earlier.
• February 29: Approximately 38 people killed and 75 injured when a suicide bomber blew
himself up in Mingora in Swat District during the funeral of a senior police officer.
• March 2: 40 people die when a suicide bomber attacked a traditional tribal meeting in the
Darra Adam Kheil region, near Peshawar.
• March 11: Twin suicide car bomb strikes government security office in Lahore – 24 dead.
• March 15: Bomb thrown over the wall of an Italian restaurant in Islamabad, a favorite
hangout for foreigners. Four FBI agents killed.
• June 2: A suicide bomber blows up a car outside the Danish embassy in Islamabad killing at
least six people and wounding about 20.
• July 6: Suicide bomber kills at least 18 in Islamabad near the Red Mosque.
• July 7: A string of seven explosions occurred within a radius 15-20 km north of Karachi.