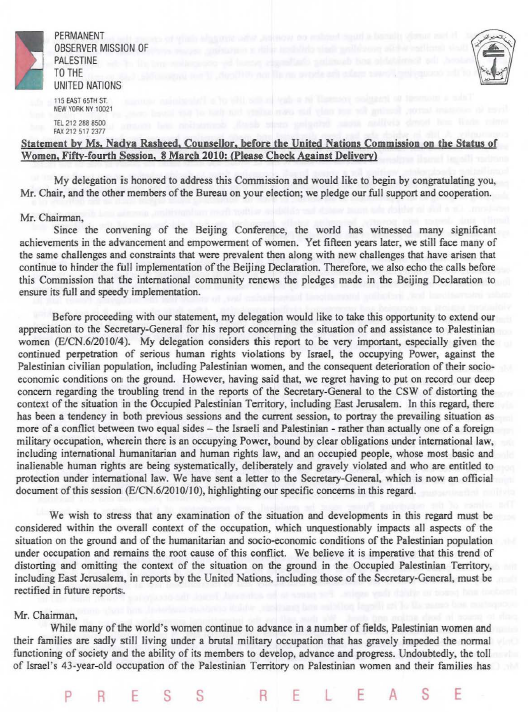 United Nations Commission on the Status of Women

Before proceeding with our statement, my delegation would like to take this opportunity to extend our appreciation to the Secretary-General for his report concerning the situation of and assistance to Palestinian women (E/CN.612010/4). My delegation considers this report to be very important, especially given the continued perpetration of serious human rights violations by Israel, the occupying Power, against the Palestinian civilian population, including Palestinian women, and the consequent deterioration of their socio-economic conditions on the ground. However, having said that, we regret having to put on record our deep concern regarding the troubling trend in the reports of the Secretary-General to the CSW of distorting the context of the situation in the Occupied Palestinian Territory, including East Jerusalem. In this regard, there has been a tendency in both previous sessions and the current  session, to portray the prevailing situation as more of a conflict between two equal sides – the Israeli and Palestinian – rather than actually one of a foreign military occupation, wherein there is an occupying Power, bound by clear obligations under international law, including international humanitarian and human rights law, and an occupied people, whose most basic and inalienable human rights are being systematically, deliberately and gravely violated and who are entitled to protection under international law. We have sent a letter to the Secretary-General, which is now an official document of this session (E/CN.612010/1 0), highlighting our specific concerns in this regard. We wish to stress that any examination of the situation and developments in this regard must be considered within the overall context of the occupation, which unquestionably impacts all aspects of the situation on the ground and of the humanitarian and socio-eonomic conditions of the Palestinian population under occupation and remains the root cause of this conflict. We believe it is imperative that this trend of
distorting and omitting the context of the situation on the ground in the Occupied Palestinian Territory, including East Jerusalem, in reports by the United Nations. including those of the Secretary-General, must be rectified in future reports.

While many of the world’s women continue to advance in a number of fields, Palestinian women and their families are sadly still living under a brutal military occupation that has gravely impeded the normal functioning of society and the ability of its members to develop, advance and progress. Undoubtedly, the toll of Israel’s 43-year-old occupation of the Palestinian Territory on Palestinian women and their families has been vast. It has surely placed a huge burden on women, who struggle daily to ensure the protection and well being of their families while providing their children with a nurturing, secure environment in which to live and grow. Indeed, the formidable and daunting challenges posed by occupation and all of the illegal and brutal policies of the occupying Power make the above an all too difficult, if not impossible, task to realize.