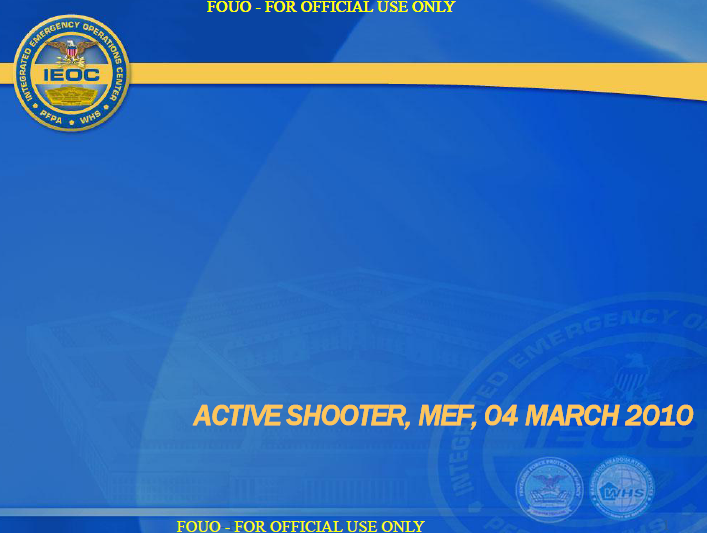 At 1836 hrs, Bedell approached Amos and Carraway who were performing access control duties at the Metro Entrance Pre-Screen. As Bedell approached the officer’s and within 3 feet of reaching them he began firing shots from a handgun. Bedell ran between the officers and in the direction of the metro entrance doors. The officers immediately gave chase and returned fire. Bedell was shot twice prior to reaching the doors and fell to the ground. Other PPD Officers in the area responded and secured the area. The building was locked down under Code Red conditions and tenants were advised thru the public address systems to remain in the building and out of the hallways.

TAC medics who were in the area performed first aid on the injured officers and the subject. Incident Command was established with LT Turner serving as the Incident Commander. That changed shortly thereafter when DC Stout arrived. The IEOC coordinated the response of Threat and Criminal Investigation Agents, and notified PFPA’s Protective Service Unit, who in turn reached out to all HRP’s. Additionally the IEOC began making required notifications. The FBI was contacted, responded and is the lead agency for this investigation. The 2 officers and the subject were transported to George Washington Hospital by Arlington County EMS. Two handguns, a knife and twenty four clips of ammunition were recovered by the FBI at the crime scene.

A person of “interest” was detained in the area of the incident, questioned and released as not being involved in the incident. All Metro trains and buses bypassed the pentagon and service to the Pentagon will remain suspended until the crime scene processing is complete. Approximately forty five minutes after the incident began, all entrances were re-opened with the exception of the metro entrance facility. Pentagon Police Chief Keevill provided a televised statement to several local news outlets to include CNN. Another statement will be made for the media at 0600. At approximately midnight the FBI advised that they had located the subject’s vehicle in Crystal City and are awaiting a search warrant.

Incident Command will remain stood up until the crime scene is cleared. Metro and DoD shuttle buses will alter their routes and drop off/pick up passengers near lane 6, adjacent the corridor 3 walkway. Additionally, all tenants and visitors who would normally use the metro entrance facility, will enter though corridor 3. Pentagon police have assigned additional officers to this area to assist with traffic control and pedestrian traffic.