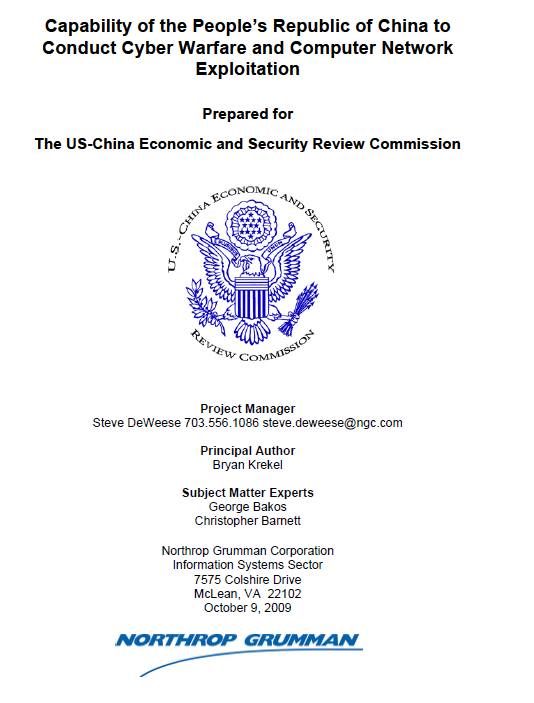 This paper presents a comprehensive open source assessment of China’s capability
to conduct computer network operations (CNO) both during peacetime and periods of
conflict. The result will hopefully serve as useful reference to policymakers, China
specialists, and information operations professionals. The research for this project
encompassed five broad categories to show how the People’s Republic of China
(PRC) is pursuing computer network operations (CNO) and the extent to which it is
being implemented by examining:

a) The PLA‘s strategy for computer network operations at the campaign and
strategic level to understand how China is integrating this capability into overall
planning efforts and operationalizing it among its field units;

b) Who are the principal institutional and individual “actors” in Chinese CNO and
what linkages may exist between the civilian and military operators;

c) Possible targets of Chinese CNO against the US during a conflict to
understand how the PLA might attempt to seize information control over the
US or similar technologically advanced military during a conflict;

d) The characteristics of ongoing network exploitation activities targeting the US
Government and private sector that are frequently attributed to China;

e) A timeline of alleged Chinese intrusions into US government and industry
networks to provide broader context for these activities.

The basis for this work was a close review of authoritative open source PLA writings,
interviews with Western PLA and information warfare analysts, reviews of Western
scholarship on these subjects, and forensic analysis of intrusions into US networks
assessed to have Chinese origins. The research draws heavily from journals and
articles published by the Chinese National Defense University and the Academy of
Military Sciences, the military’s highest authority for issues of doctrine, strategy, and
force modernization. Many of these publications offer substantive insights into
current thinking on strategy and doctrinal issues related to information warfare and
CNO. Additional insights into the role of information warfare in broader campaign
doctrine and strategy came from The Science of Military Strategy, The Science of
Campaigns, two of the most authoritative sources on the subject available in the open
press. The military’s official newspaper, The PLA Daily, and a range of Chinese
military journals, official media, provincial and local media as well as non-PRC
regional media, all provided data on information warfare (IW) training events.

The government of the People’s Republic of China (PRC) is a decade into a
sweeping military modernization program that has fundamentally transformed its
ability to fight high tech wars. The Chinese military, using increasingly networked
forces capable of communicating across service arms and among all echelons of
command, is pushing beyond its traditional missions focused on Taiwan and toward a
more regional defense posture. This modernization effort, known as
informationization, is guided by the doctrine of fighting “Local War Under
Informationized Conditions,” which refers to the PLA’s ongoing effort to develop a
fully networked architecture capable of coordinating military operations on land, in air,
at sea, in space and across the electromagnetic spectrum.

This doctrinal focus is providing the impetus for the development of an advanced IW
capability, the stated goal of which is to establish control of an adversary’s
information flow and maintain dominance in the battlespace. Increasingly, Chinese
military strategists have come to view information dominance as the precursor for
overall success in a conflict. The growing importance of IW to China’s People’s
Liberation Army (PLA) is also driving it to develop more comprehensive computer
network exploitation (CNE) techniques to support strategic intelligence collection
objectives and to lay the foundation for success in potential future conflicts.
One of the chief strategies driving the process of informatization in the PLA is the
coordinated use of CNO, electronic warfare (EW), and kinetic strikes designed to
strike an enemy’s networked information systems, creating “blind spots” that various
PLA forces could exploit at predetermined times or as the tactical situation warranted.
Attacks on vital targets such as an adversary’s intelligence, surveillance, and
reconnaissance (ISR) systems will be largely the responsibility of EW and
counterspace forces with an array of increasingly sophisticated jamming systems and
anti-satellite (ASAT) weapons. Attacks on an adversary’s data and networks will
likely be the responsibility of dedicated computer network attack and exploitation
units.