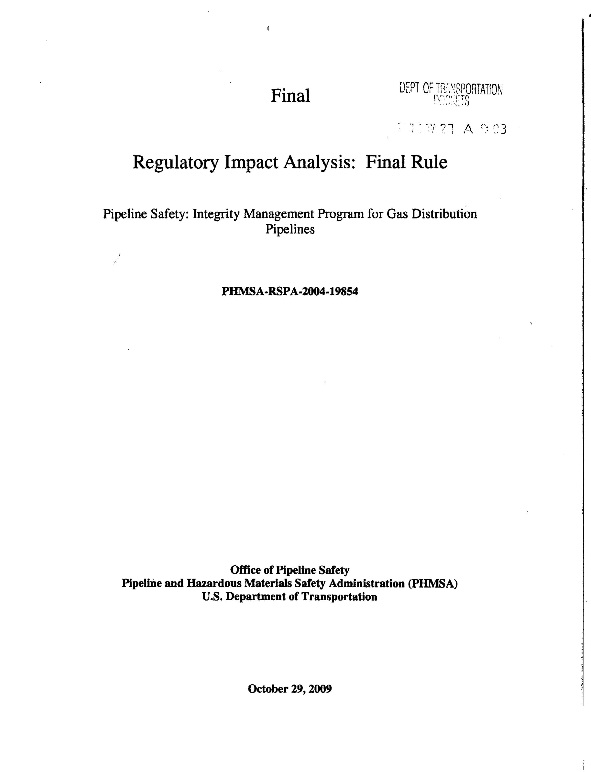 7.1.3 Benefits of Avoiding an Accident with Low Probability and High Consequences

PHMSA made an adjustment to the expected value of property damage occurring from 2001 through 2005, since some of the property damage was caused by Hurricane Katrina in 2005 (an outlier), which skewed the damages above expectations and which this rule was not designed to mitigate. A more accurate expected value of benefits, perhaps reflective of a longer timeline and taking into account risks and consequences not experienced from 2001 through 2005, would show a higher expected benefit of this rule} It is possible for high-consequence accidents to occur, in which there are a disproportionately large number of casualties (Le., deaths and serious injuries), since a portion of gas distribution piping is located in densely populated areas with schools and businesses containing a large number of people.

For example, the largest accident that has occurred in U.S. distribution pipeline history
occurred on November 21, 1996, in San Juan, Puerto Rico. A leak from an LPG line
resulted in an explosion in a commercial building that killed 33 people and injured at
least 69. There is some disagreement as to whether the pipeline leak was a proximate
cause or whether there was fIrst a fIre that then ignited the leaking propane.
Nevertheless, this accident demonstrates that high-consequence events can occur as a
result of gas line leaks.

To estimate the benefIts derived from avoiding the consequences of high-consequence
events, since that type of event clearly would fall outside most 4- to 5-year time periods
and was not reflected in the baseline data, international data were used. A study
completed recently by the Paul Scherer Institute (PSn in Switzerland can be used as an
indicator of the potential likelihood of a severe consequence of an event in the United
States. PSI’s study was part of a comprehensive study of the safety of different energy
systems. Although PSI concluded that natural gas has been demonstrably safer than other
forms of energy, considering both transportation and use, it found that high-consequence
accidents have occurred.

An accident occurred in Corlu, Turkey on August 9, 1992, in which 32 people were killed
and 64 injured. The largest number of fatalities experienced as a result of a natural gas
accident was found to have occurred in a 1995 accident in Taegu, Korea, in which 109
people were killed. Over the period analyzed (1969-2000), PSI found that 129 accidents
occurred worldwide in which 5 or more persons were killed, resulting in 1,971 fatalities.
During this period, 3 accidents involving more than 50 fatalities occurred within the
countries comprising the Organization for Economic Cooperation and Development
(OECD, which includes the United States).30 Six such accidents occurred in non-OECD
countries.

The PSI report did not estimate the number of serious injuries that would occur in
additionl to the number of fatalities. The limited experience described above
demonstrates that more injuries than fatalities generally occur in these rare events. This
mirrors the experience for events of lesser consequence. PHMSA has assumed, for
purposes of this analysis, that 90 persons would be seriously injured in an event in which
45 persons were killed.

Applying this probability estimate to the United States for purposes of this analysis
required that the electric equivalent of U.S. gas consumption be calculated. The Energy
Information Administration (EIA) reports that U.S. gas consumption in 2006 was
21,860,945 million cubic feet. 31 This amount was converted to an energy equivalent
using a standard assumption of 35.6 mega joules per cubic meter (MJ/m\ The resulting
estimate of thermal energy used in the United States in 2006 in the form of natural gas is
2.2*1013 MJ. This thermal energy was then converted to electrical energy equivalent
using an assumed efficiency factor of 0.35. the same factor used in the PSI study. The
resulting estimate of electrical energy equivalent is 244.3 GWe-yr.

This equivalent consumption amount was then multiplied by the probability per GWe-yr
inferred from the PSI study (1 *10-4). The resulting estimate of the probability of an
accident in the United States that would involve 45 fatalities and 90 serious injuries is
0.0243 per year. That is, there is approximately a 2.4 percent chance in any given year
that such an event would occur.

If that probability is correct, the number of such accidents that would be expected to
occur in the United States in 50 years is thus 1.215. In 20 years. 0.486 events would be
expected (i.e., there is a 48.6-percent chance of one event occurring in 20 years). 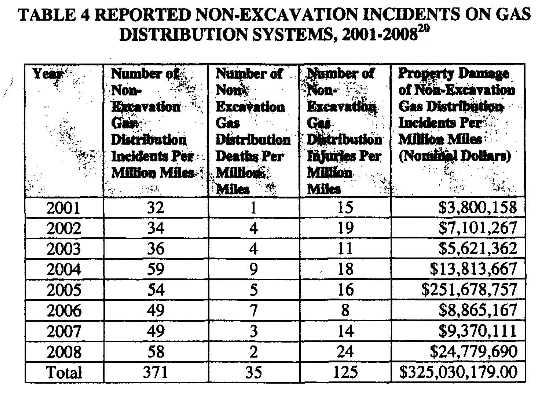