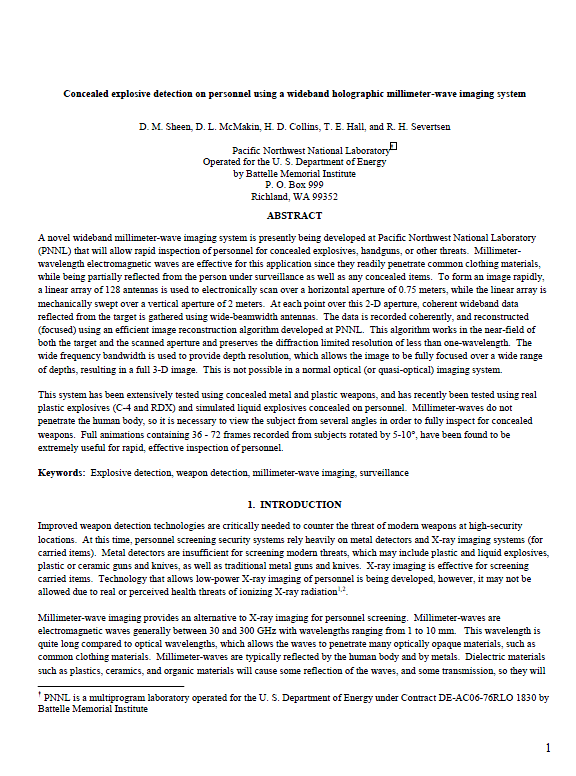 A novel wideband millimeter-wave imaging system is presently being developed at Pacific Northwest National Laboratory (PNNL) that will allow rapid inspection of personnel for concealed explosives, handguns, or other threats. Millimeterwavelength electromagnetic waves are effective for this application since they readily penetrate common clothing materials, while being partially reflected from the person under surveillance as well as any concealed items. To form an image rapidly,
a linear array of 128 antennas is used to electronically scan over a horizontal aperture of 0.75 meters, while the linear array is mechanically swept over a vertical aperture of 2 meters. At each point over this 2-D aperture, coherent wideband data reflected from the target is gathered using wide-beamwidth antennas. The data is recorded coherently, and reconstructed (focused) using an efficient image reconstruction algorithm developed at PNNL. This algorithm works in the near-field of
both the target and the scanned aperture and preserves the diffraction limited resolution of less than one-wavelength. The wide frequency bandwidth is used to provide depth resolution, which allows the image to be fully focused over a wide range of depths, resulting in a full 3-D image. This is not possible in a normal optical (or quasi-optical) imaging system. This system has been extensively tested using concealed metal and plastic weapons, and has recently been tested using real
plastic explosives (C-4 and RDX) and simulated liquid explosives concealed on personnel. Millimeter-waves do not penetrate the human body, so it is necessary to view the subject from several angles in order to fully inspect for concealed weapons. Full animations containing 36 – 72 frames recorded from subjects rotated by 5-10°, have been found to be extremely useful for rapid, effective inspection of personnel.

Improved weapon detection technologies are critically needed to counter the threat of modern weapons at high-security locations. At this time, personnel screening security systems rely heavily on metal detectors and X-ray imaging systems (for carried items). Metal detectors are insufficient for screening modern threats, which may include plastic and liquid explosives, plastic or ceramic guns and knives, as well as traditional metal guns and knives. X-ray imaging is effective for screening carried items. Technology that allows low-power X-ray imaging of personnel is being developed, however, it may not be
allowed due to real or perceived health threats of ionizing X-ray radiation1,2.

Millimeter-wave imaging provides an alternative to X-ray imaging for personnel screening. Millimeter-waves are electromagnetic waves generally between 30 and 300 GHz with wavelengths ranging from 1 to 10 mm. This wavelength is quite long compared to optical wavelengths, which allows the waves to penetrate many optically opaque materials, such as common clothing materials. Millimeter-waves are typically reflected by the human body and by metals. Dielectric materials such as plastics, ceramics, and organic materials will cause some reflection of the waves, and some transmission, so they will be seen as partially transparent. Millimeter-waves are non-ionizing, and effective imaging systems can be operated at extremely low power levels. The IEEE standard for power density levels in this frequency range is less than 10 mW/cm2. Our imaging system operates at power levels 2-3 orders of magnitude lower than this standard.

In this paper, results obtained using a wideband, millimeter-wave, holographic imaging system are presented. This system uses active millimeter-wave illumination to form high resolution fully-focused three-dimensional images of the person being screened. The imaging system uses coherent illumination and detection (magnitude and phase) of the scattered wavefront. This wavefront is then mathematically focused (or reconstructed) to form a full 3-D image3-6. Three-dimensionality is required in this application because a high-resolution millimeter-wave imaging system will have a very short depth of field
due to the low F-number of the system ( less than F-1). The human body is not flat, therefore, without wideband (3-D) operation, it is impossible to obtain an image in which all of the body is in focus at the same time. Wideband imaging allows for three dimensional imaging through the range resolution of the wideband system, which allows each depth to be in complete focus.

There are alternative imaging systems which have been proposed for this application. Low-power X-ray backscatter imaging systems have been developed and are effective systems1,2. These systems are relatively large and expensive (as is the millimeter-wave technology) and make use of ionizing radiation which may hamper their acceptance. An alternative millimeter-wave imaging technology has also been proposed7,8. This system uses a millimeter-wave imaging array placed at the focal-plane of a lens, and operates in a manner analogous to optical video cameras. This system has been proposed in both active and passive implementations. This configuration is conceptually appealing, but may not possess the highresolution of a full-body aperture system such as described in this paper.

A millimeter-wave imaging system has been developed for the FAA as a prototype for personnel screening at airport checkpoints. This system is fully-functional, but is not yet intended to handle full passenger throughput. A block diagram of the imaging system is shown in Figure 1. A 128 element linear switched antenna array is supported within a 2 meter vertical high-speed scanner. A transceiver creates the wideband illumination and measures the magnitude and phase of the scattered wavefront. An interface board controls the timing and the synchronization of the system with the computer. Data from the
transceiver is digitized using an A/D converter and transferred to the computer. After a full aperture of data is collected, the computer reconstruction algorithm (developed at PNNL) is used to focus the data into a 3-D image. The 3-D data set is then collapsed into a single 2-D fully-focused image which is displayed on the computer. Table 1 shows many of the relevant specifications of the millimeter-wave imaging system.

A photograph of the prototype imaging system is shown in Figure 2. A close-up of the 128 element (27 – 33 GHz) millimeterwave array with transceiver and interface electronics is shown in Figure 3. The transceiver uses two voltage controlled oscillators (VCO’s) offset from each other by an intermediate frequency (IF). One oscillators’ output is frequency doubled (to 27 – 33 GHz) for transmission, while the other oscillator is frequency doubled and used to provide the local-oscillator (LO) signal. This LO is used to down-convert the receive millimeter-wave signal to the IF frequency, which is subsequently down converted to baseband to yield the in-phase signal (I). This signal contains the amplitude and phase of the scattered wavefront, which is the desired measurement.

The 128 element millimeter-wave array is composed of two sequentially switched 64 element arrays placed back-to-back. One 64 element array is dedicated to transmission of the millimeter-wave signal and is composed of 9 single-pole eight-throw (SP8T) switch modules. The 64 element receive array is identical. The SP8T switch module is fabricated using a fin-line pin-diode configuration in a split-block waveguide structure. An interleaving scheme is used to obtain 127 independent samples of the scattered wavefront across the 0.75m horizontal aperture. 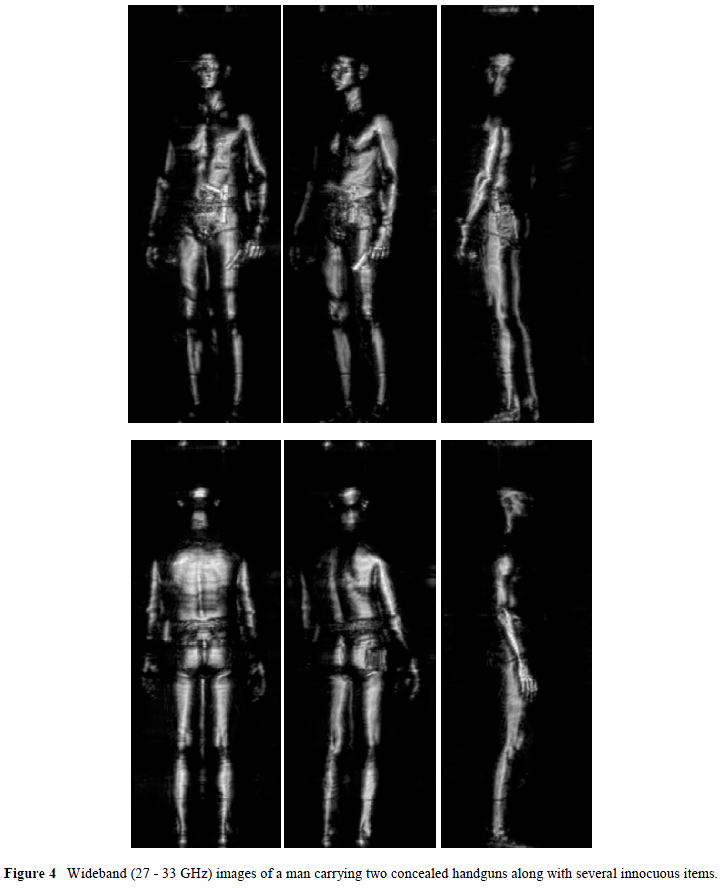