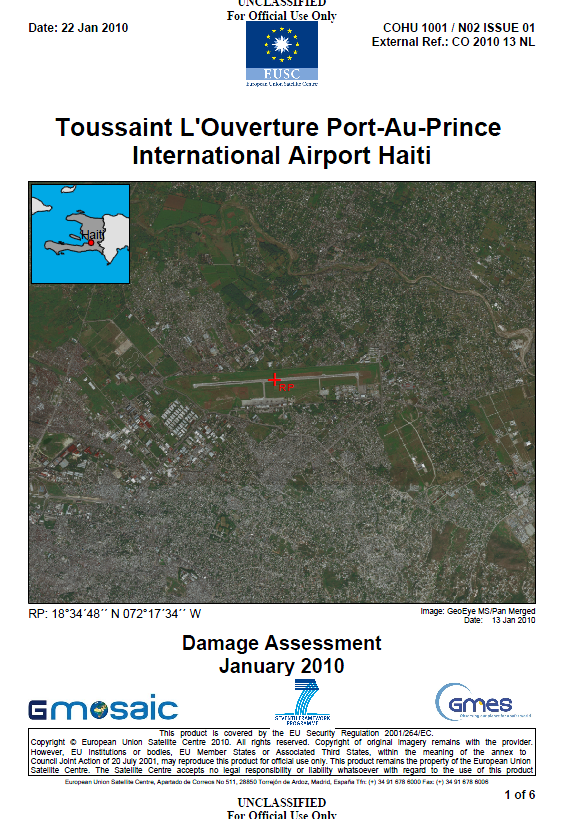 This briefing note covers Toussaint L´Ouverture, Port-au-Prince International Airport in Haiti and provides image analysis of the status, activity and facilities of the airfield with particular regard to any observed damage due to the recent earthquake. The note has been produced using a GeoEye multispectral image, dated 13 January 2010 which has been combined with open source collateral information. The information cut-off date of this briefing note is 22 January 2010.

On the access roads leading to the airport vehicle traffic appeared to be
moving freely with no visible damage or obstructions on the roads. Ground
support equipment within the airport was also active.

No air or ground defences were observed at the airfield or in the surrounding
area.

The passenger terminal is equipped with three passenger bridges and also
accommodates the air traffic control (ATC) tower on its roof. Adjacent to the
passenger terminal are numerous cargo transhipment buildings (Figure 3). To
the east of the passenger terminal is a POL storage area with three flat-roofed
POL storage tanks (Figure 3). In addition, a UN logistics base is contained in
a compound to the west of the south eastern aircraft parking apron. The
compound contains a hospital, numerous storage and support buildings and
vehicle parking areas occupied by light-toned UN vehicles (2) (Figure 5). The
airport navigation and landing aids include an ILS system and PAPI system at
the western end of the runway. The airport is partly wall and partly fencesecured
with watch towers and a perimeter patrol track. The main access to
the airport is via a twin lane asphalt road leading to the airport terminal.

Although open source media reports have stated that the airport’s ATC tower
suffered damage during the earthquake and is not in use, no damage, such as
ground cracks or collapsed buildings and structures was visible on the image
of 13 January 2010. All of the aircraft operating areas and the internal roads
appear serviceable. 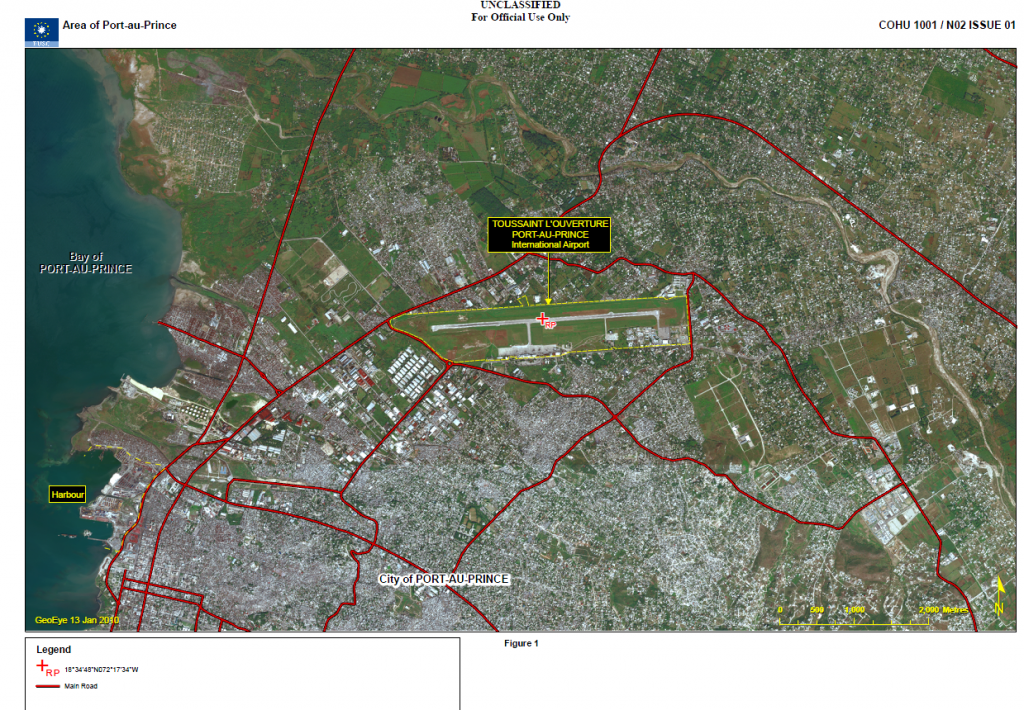 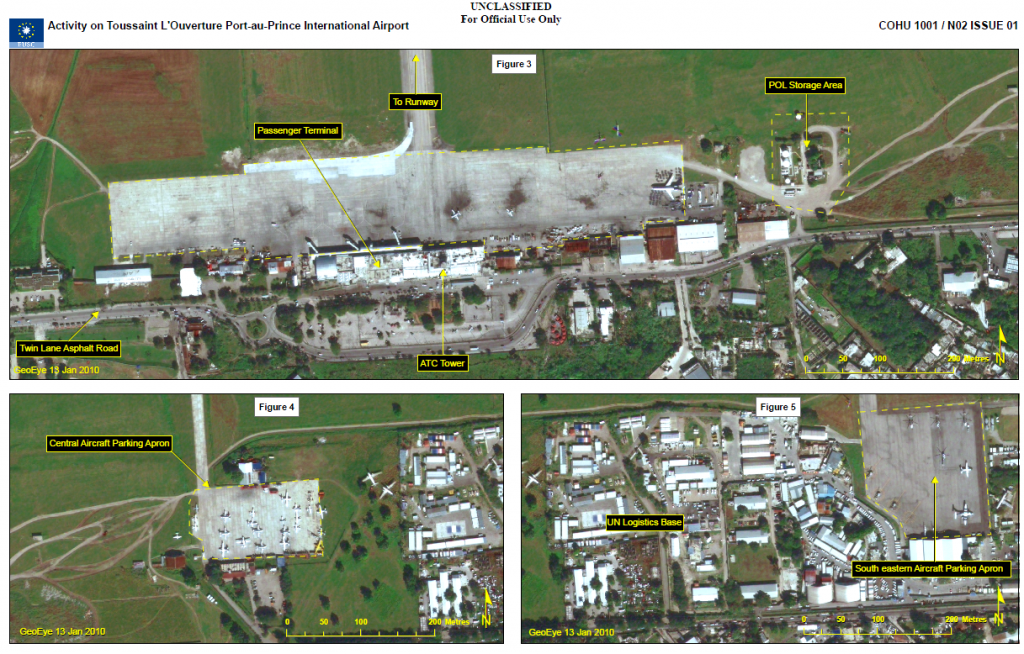 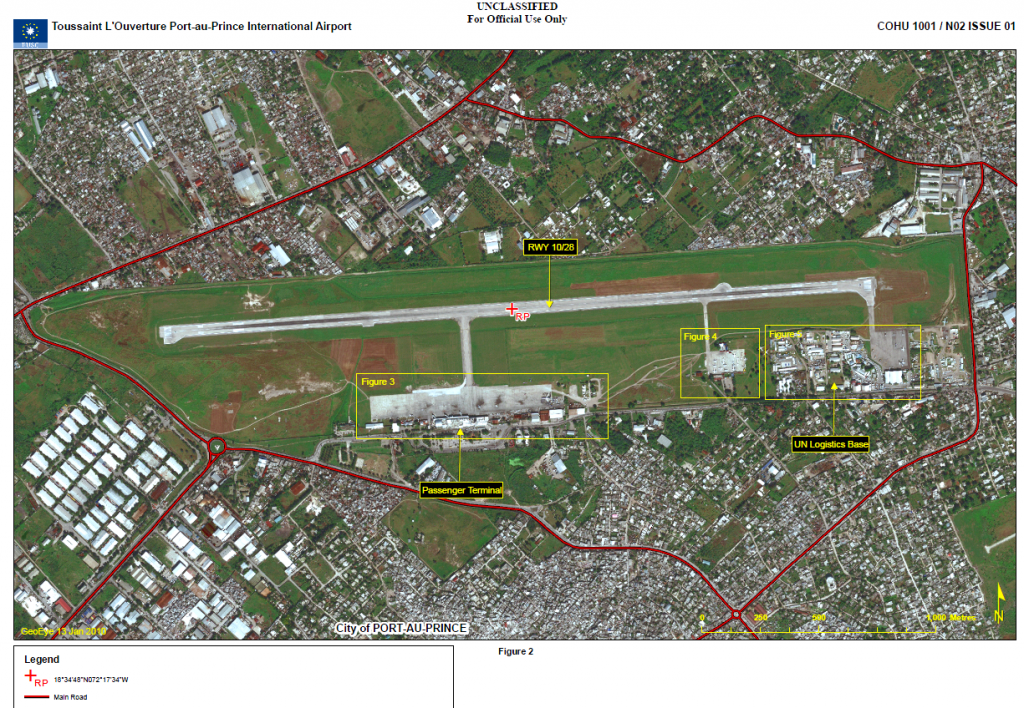