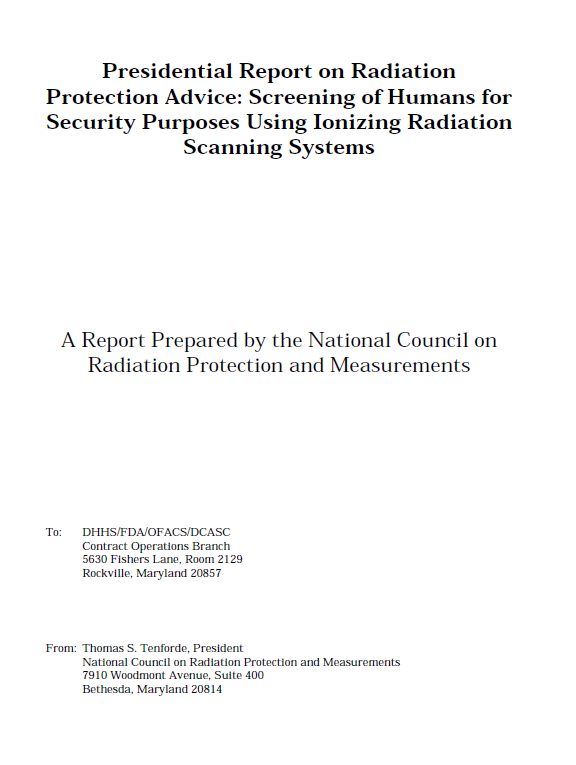 This Presidential Report from the National Council on Radiation Protection and Measurements (NCRP) has been prepared at the request of the Food and Drug Administration (FDA). FDA has the responsibility for regulating the manufacture of electronic products that emit ionizing and nonionizing radiation and is working with the Transportation Security Administration (TSA), which has the responsibility of providing security measures for transportation activities. The FDA asked the NCRP for advice on radiation protection issues concerning exposure to ionizing radiation from radiation-producing devices used for non-medical security purposes. These devices, particularly x-ray scanning systems, are being evaluated by various agencies (e.g., U.S. Customs Service and TSA) for use in security screening of humans.

The use of such scanning devices involves a broad societal decision that needs to be made through appropriate procedures by the authorities utilizing the x-ray producing electronic products (and other types of ionizing radiation producing systems) as a security device for screening humans. This report provides an evaluation of radiation levels, radiation risk, and radiation protection measures that should be taken into consideration by implementing authorities. However, the NCRP cannot render an opinion of the net benefit of using these devices based on the ionizing radiation aspects alone.

The question of the biological effects of low levels of radiation has been investigated and debated for more than a century. There are data from the available human epidemiological studies that suggest equivalent doses as low as 50 mSv in one year or as low as 100 mSv over a lifetime (in addition to natural background) may produce an increased risk of deleterious consequences in man, both in terms of cancer and non-cancer endpoints (see Sections 5.2.1 and 5.2.2). At lower doses, progressively larger epidemiological studies would be required to evaluate the risk. For example, if the excess risk were proportional to the radiation dose and if a sample size of 500 persons were needed to determine the effect of a high, 1,000 mGy absorbed dose, a sample of 50,000 might be needed for a 100 mGy absorbed dose, and about five million for a 10 mGy absorbed dose (Land, 1980; Pochin, 1976). In other words, to obtain statistical precision and power, the necessary sample size increases approximately as the inverse square of the dose.

In considering the effects of low doses of radiation, it is also important to make the distinction between doses delivered acutely over a very short period of time (such as the atomic bomb exposures), and protracted exposure (such as occupational exposure). Generally speaking, protracted exposures to sparsely ionizing radiation such as x or gamma rays are associated with lower risks than those resulting from an acute exposure at the same total dose (NCRP, 1980).

There are data for exposed human populations that suggest an increase in risk for cancer mortality at acute equivalent doses as low as 50 mSv, and more limited data that suggest an increase in some cancer risks at acute doses as low as about 10 mSv. Some details of the principal studies for acute doses (Doll and Wakefield, 1977; Pierce and Preston, 2000; Pierce et. al, 1996; Ron et. al., 1995) are given in Section A.2.1 of Appendix A. It is unlikely that we will ever be able to directly generate risk estimates at significantly lower doses. However, the fact that the sensitivity of the studies does not allow for direct estimates of cancer risk at lower doses does not imply any conclusion, one way or another, on whether there actually are increases in cancer risk at these lower acute doses.

There are data that suggest an increase in some cancer risks in humans for protracted equivalent doses as low as 100 mSv, and more limited data that suggest an increase in risk at protracted doses as low as about 50 mSv. Some details of the principal studies for protracted doses (Ashmore et. al., 1998; Cardis et. al., 1995; Gilbert, 2001; Morin Doody et. al., 2000; Muirhead et. al., 1999; Ron et. al., 1989; Sont et. al., 2001) are given in Section A.2.2 of Appendix A. As expected, these doses are somewhat higher than those for acute exposures, as protraction of exposure generally decreases the risks of sparsely ionizing radiation such as x or gamma rays. As with acute exposures, it is unlikely that we will be able to directly generate risk estimates at tissue or organ equivalent doses much less than approximately 50 mSv. Again, the fact that cancer risks cannot be directly estimated at lower doses does not imply any conclusion, one way or another, on whether there actually are increases in cancer risk at these lower protracted doses.

5.2.3 Extrapolation of Risks to Lower Doses

At absorbed doses below which statistically significant risks have been demonstrated [i.e., 50 to 100 mGy (protracted exposure) or 10 to 50 mGy (acute exposure)], the shape of the appropriate dose-response curve is not known, because the signal to noise ratio of epidemiological or even laboratory data becomes too small. All the dose-response relationships shown in Figure 5.1 are possible descriptors of low-dose radiation oncogenesis, and different endpoints (e.g., carcinoma versus sarcoma induction, breast-cancer versus lung-cancer induction) may well show qualitatively different dose-response relationships.

At the low and intermediate absorbed doses (0.2 to 1 Gy) that are generally amenable to investigation, there is a wealth of data, both from epidemiological studies and from laboratory studies, that is consistent with a linear dose-response relationship. The data are extensively reviewed in the recent NCRP Report No. 136 (NCRP, 2001), which concluded “although other dose-response relationships for the mutagenic and carcinogenic effects of low-level radiation cannot be excluded, no alternate dose-response relationship appears to be more plausible than the linearnonthreshold model on the basis of present scientific knowledge”.

Based on a linear relationship between risk and dose at low doses or low-dose rates, the International Commission on Radiological Protection (ICRP) provides estimates of cancer mortality risk as shown in Table 5.1. In using these population risk estimates, it is important to bear in mind that certain subgroups [e.g., children, the developing embryo or fetus, and genetically susceptible individuals, such as individuals who are heterozygous for the Ataxia Telangiectasia gene (ICRP, 1998)] will exhibit higher risks, while other subgroups, such as elderly individuals, will exhibit lower risks. Additional discussion on the radiation sensitive subgroups in the population is given in Section A.2.3 of Appendix A.