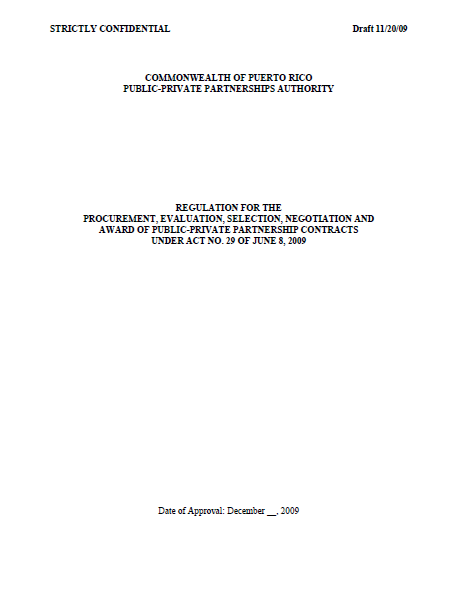 1.2 Purpose of Regulation. The purpose of this regulation is to establish a procurement, evaluation, selection, negotiation and award process for PPPs that is consistent, transparent, and encourages and supports a climate of private sector innovation and investment in the Commonwealth. In order to carry out the purposes of the Act, this regulation provides guidelines and procedures for, among others: (i) identifying the Functions, Services or Facilities that qualify for establishment or development as PPPs; (ii) soliciting, obtaining and evaluating PPP proposals; (iii) selecting the entities or individuals that will enter into Partnership Contracts with a Partnering Government Entity; and (iv) negotiating and awarding Partnership Contracts.

The Partnership Committee shall be constituted by:

(a) the President of the Bank or his/her delegate;

(b) the officer of the Partnering Government Entity with direct inherence in the project or his/her delegate;

(d) two (2) officials from any Government Entity chosen by the Authority for their knowledge and experience in the kind of project covered by the Partnership under consideration.

(a) to approve documents as required by the RFQ, the RFP, the evaluation and selection for the Partnership;

(b) to evaluate Proponents and pre-qualify those most suitable to participate as Proponents;

(c) to evaluate the Proposals submitted and select that which is or those which are best in each case, pursuant to the procedures provided in this regulation;

(d) to engage in or supervise the negotiation of the terms and conditions of the Partnership Contract;

(e) to contract, on behalf of the Authority, advisors, experts or consultants with the knowledge necessary to assist the Partnership Committee and the Authority in the adequate discharge of its functions;

(f) to keep a book of minutes;

(g) to prepare a report on the entire procedure leading to the establishment of a Partnership as required by the Act;

(h) to oversee proper compliance with the regulations and procedures established for negotiation and award of Partnership Contracts;

(j) to carry out any additional task related to the selection, negotiation and award procedure contained in this regulation, as requested by the Authority.

The Partnership Committee and/or the Executive Director will provide the Board with periodic reports of all significant developments in the procurement and negotiation of a PPP.

4.1 Identification of Projects for Public-Private Partnerships. The Authority shall select, evaluate and prioritize the Projects to be established under PPPs pursuant to Article 6(b) [– Specific Powers] and Article 7(a) [– Project Inventory] of the Act, in accordance with the public policy and the goals identified in Article 3 [– Public Policy] of the Act.

4.3 Market Soundings Process. In connection with the identification of Projects and prior to the commencement of the RFP process, the Authority may seek feedback and input from market participants to determine the best approach for selecting viable and marketable Projects by:

(i) conducting a Request for Information (or “RFI”);

(ii) issuing an Expression of Interest (or “EOI”); or

4.4 Qualification of Proponents (RFQ). The Authority may issue a RFQ for a PPP only after it has determined that: (i) the Project meets the requirements of Article 3 [– Public Policy] of the Act; and (ii) it is advisable to pursue the establishment of a PPP in connection with a Project.

In anticipation of a RFP or as otherwise required by the Act or the Authority, the Partnership Committee may conduct a RFQ procurement process to identify the prospective Proponents that satisfy minimum standards of: (i) financial condition; and/or (ii) technical or professional ability and experience. Any such minimum standards will be specified in the RFQ and will be related and proportionate to the subject matter of the proposed Partnership Contract. The Partnership Committee may, in addition to such minimum standards, include other qualification requirements in the RFQ and request information about a prospective Proponent including prior defaults, bankruptcies or material lawsuits. All prospective Proponents also must comply with the requirements set forth in Article 9(a)(ii) to (iv) [– Applicable Requirements and Conditions for those who wish to be considered as Proponents] of the Act to be eligible to participate in the RFQ process.

The RFQ will be announced by means of a public notice in accordance with the procedures and standards for a RFP set forth in Sections 4.5 and 4.6 of this regulation, to the extent applicable.
Consortia and other Proponents who intend to submit Proposals jointly must comply with the requirements of Article 9(d) [– Consortia] of the Act, this regulation and any other requirement specified by the Authority in the RFQ.

If the Authority elects not to issue a RFQ before publishing a RFP for any Project, the Partnership Committee will make the evaluation of the qualifications of the Proponents as part of the RFP process in accordance with the qualifications requirements contained in the RFP and Sections 5 and 6 of this regulation. If a RFQ process that meets the requirements of Sections 4.5 and 4.6 of this regulation has been carried out for a particular Project, the RFP process can be modified, accordingly.

4.5 Public Notice of Request for Proposals (RFP). The Authority may issue a RFP for a PPP, only after it has determined that: (a)(i) the Project meets the requirements of Article 3 [– Public Policy] of the Act; and (ii) it is advisable to pursue the establishment of a PPP in connection with a Project; and (b) the Study of Desirability and Convenience has been posted on the Authority’s website and a notice has been published in a newspaper of general circulation in the Commonwealth stating that such study has been posted on the Authority’s website, providing the Internet address of the Authority’s website and containing a summary of the key findings of such study, all as required by Article 7(c) [– Publication] of the Act.

Except as otherwise provided in Article 9(b)(ii) [– Procedure for Selection and Award] of the Act and Section 4.12 of this regulation, and except to the extent a prior RFQ process for the related Project has been effected by means of public notices, the Partnership Committee will solicit Proposals from Proponents by means of a public notice of a RFP for each Project. The RFP will be published by the Authority in one or more newspapers of general circulation in the Commonwealth, in the Internet at the websites of the Bank, the Authority and the Partnering Government Entity engaging in the PPP and, in the discretion of the Partnership Committee, in one or more national or international journals. The Authority may also employ such other methods and processes, including other means of electronic communication, as it deems advisable in order to disseminate the RFP. The publication and dissemination of a RFP in this fashion is intended to provide reasonable notice to the largest number of potential Proponents that can be reasonably anticipated to submit Proposals as set forth in Article 9(b)(ii) [– Procedure for Selection and Award] of the Act.

The Partnership Committee may also solicit Proposals directly from prospective Proponents through a notice of RFP if it believes that such entities may be uniquely qualified to participate in a specific PPP.
This Section 4.5 shall not apply to any Project for which a RFQ has been undertaken. In the event that a RFQ has been undertaken, the Authority may, at its discretion, distribute a RFP and related addenda to those Proponents qualified through the RFQ process.