The following guide was released by the Canadian government in June 2009. 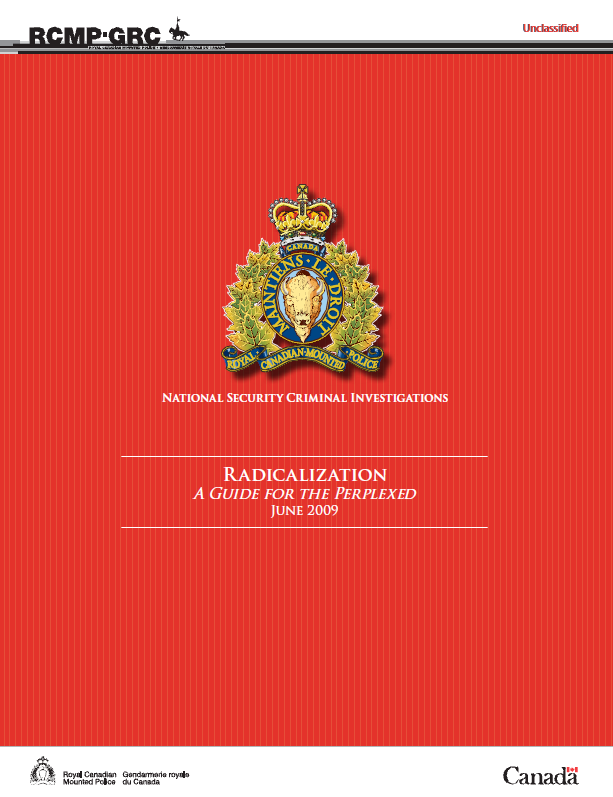 Radicalization: A Guide for the Perplexed

Radicalization is a critical subset of the terrorist threat. The RCMP defines radicalization as the process by which individuals — usually young people — are introduced to an overtly ideological message and belief system that encourages movement from moderate, mainstream beliefs towards extreme views. While radical thinking is by no means problematic in itself, it becomes a threat to national security when Canadian citizens or residents espouse or engage in violence or direct action as a means of promoting political, ideological or religious extremism. Sometimes referred to as “homegrown terrorism,” this process of radicalization is more correctly referred to as domestic radicalization leading to terrorist violence. The nuances of this definition are critical. The English word “radical” comes from the Latin radis, or “root.” Its connotation (as in the word “radish”) is of being buried in the ground, rooted, fundamental. So a radical is a person who wishes to effect fundamental political, economic or social change, or change from the ground up.

As stated in the RCMP definition, radical thinking is not necessarily problematic. Most progress has been an outcome of some form of radicalization and the mindset that accompanies it. Martin Luther King was considered a radical, as were a host of other people that we now view as important and entirely legitimate historical figures, from Moses, Mohammed and Jesus to Gandhi, Nelson Mandela and Gloria Steinem. In some cases, even violent radicals have later been deemed to be acting in the name of causes that were just. John Brown, the 19th century American abolitionist is an example of such an individual.

All of us have views and opinions that others would define as radical, if not extreme. Radical thought and action does not necessarily translate into terrorism. In fact, radicals can play a highly positive role, both in their communities and in the larger political context (although admittedly this role is often only acknowledged after the fact). Again, radical views only become a problem when they are used to promote or condone violence or other forms of extremist behavior, including terrorism.

In a contemporary context, radicalization is most often discussed with reference to young Muslims who are influenced, to one degree or another, by Islamist thought. Islamism (the practical application of Islamist thought), a term that is NOT a synonym for Islam, is a set of ideologies that holds that Islam is not simply a religion, but also a political system. This system is exemplified by the various Caliphates — political dynasties that combined political with religious hegemony — that ruled the medieval Islamic world. The basic tenets of Islamist thought hold that modern Islam must return to its historic and theological roots, that this “proto-Islam” must become a political unifying factor for Muslims the world over, and that a truly Islamic society must be governed by law derived from traditional Islamic sources.

There are many different proponents of Islamism, and many different schools of Islamist thought. Many of these, like the Muslim Brotherhood, are not terrorists, nor do they necessarily advocate violence (although Hamas, among others, has its ideological roots in the teachings of the Muslim Brotherhood and some senior al Qaeda associates are linked to it). By far the best known and most problematic Islamist group, however, is al Qaeda and all of the groups and individuals that are associated with it. Moreover, most recent radicalization leading to terrorism in Canada, in the United States, in Europe and elsewhere has been driven by al Qaeda, its ideology, or by groups or individuals who are either associated with or influenced by al Qaeda.

Public awareness of radicalization in Canada has largely been determined by the events and personalities associated with the “Toronto 18” and Momin Khawaja cases. In this country, radicalization that is rooted in Islamist ideology is a relatively recent phenomenon, however. Radicalization has always been a part of socio-political reality, even in Canada. It has spanned not only the entire “left-right” political spectrum, from environmental and animal rights activists to neo-Nazis, but a range of ethnic and religious interests as well. From a Canadian perspective, the actions of the FLQ and the “Squamish Five,” and the Air India bombing embody the kind of extremist “direct action” that can lie at the end of the radicalization process.

Radicalization can occur due to a multitude of factors and influences. There is no single group that seeks out vulnerable and impressionable young people. Nor is radicalization limited to any single ethnic or interest group. Historically, violent factions of various political ideologies have employed similar recruiting strategies and targeted similar demographics.

The life stories and experiences of a range of historical characters from many different cultures can be understood as manifestations of not only radicalization, but also the violence that can lie at the end of the radicalization continuum. These include Vladimir Lenin, whose single-minded pursuit of revolution was driven, in large measure, by the execution of his beloved older brother, a revolutionary, by Tsarist authorities; Ernesto “Che” Guevara whose radical, and ultimately violent extremist worldview originated in his experiences as a young doctor working in South American leper colonies; and even Jesse James, whose rampage of banditry and terrorism across the American Midwest was a largely a continuation of the Civil War by other means.

Nevertheless, domestic radicalization associated with violent Islamist extremist ideology is a particular concern for law enforcement and security agencies. Virtually all of the planned or actual terrorist attacks in Western Europe and North America since 9/11 have been carried out by young Muslims. Whatever their national and cultural origins, most were either native-born citizens or long-term residents of the countries they were attacking and most had undergone an identifiable process of radicalization. These attacks include the Theo Van Gogh killing and the “Hofstad Plot” in the Netherlands; the Madrid bombings; the 7/7 bombings and their aftermath, Operation OVERT (the so-called “Heathrow Plot”), the 2007 firebombing of Glasgow Airport and failed terrorist attacks in Central London; and, of course, the “Toronto 18” and Khawaja cases in Canada.