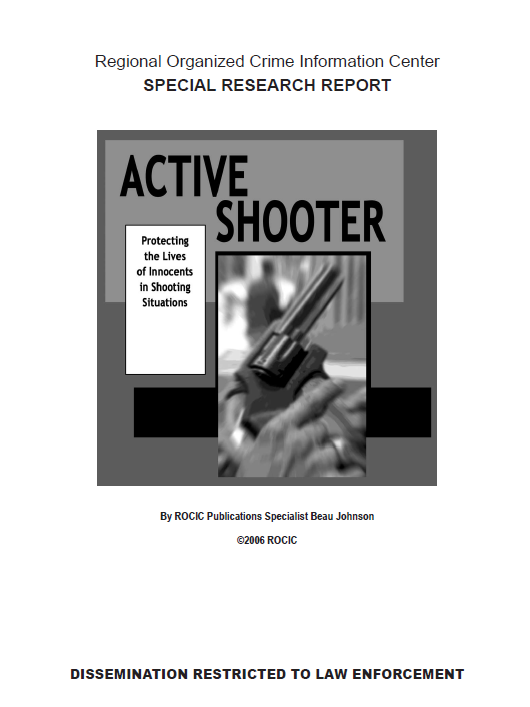 Some of the most tragic events in our country’s recent history have been episodes where a deviant has carried out shootings in public places. These killings take place for no other reason than to harm as many innocent people as possible. They are often unpredictable and strike in places dear to us, such as our schools, churches, and places of work. They also can occur in random public settings. The definition of an active shooter incident is when one or more subjects participate in a shooting spree, random or systematic, with intent to continuously harm others. Active shooter scenarios are incredibly dangerous and difficult because there is no criminal objective (robbery, hostagetaking) involved other than mass murder. Often, the shooter has no regard for his own life, and may be planning to die. These elements leave officers no other tactic than to find and neutralize the shooter as quickly as possible. For officers, the key to protecting the public from an active shooter is to respond appropriately to the unique situation with intensity and speed. They need to have a working knowledge of the scenario, and a working plan to confront it.

The most poignant example of active shooter horrors are found in the school shootings of recent years. Although there were isolated events before, a string of school shootings that began in 1995 (Giles Co., Tenn.) still persists to this day, with an attack as recently as Nov. 2005, in which a 15- year-old student shot and killed an assistant principal in Jacksboro, Tenn. Approximately 43 school shootings have occurred in the U.S. since 1995. The deadliest of school shootings came on April 20, 1999 (the 110th anniversary of Adolf Hitler’s birth) at Columbine High School in Littleton, Colo. Students Eric Harris and Dylan Klebold conducted a shooting rampage that killed 13, one teacher and 12 students, before shooting themselves. There were 25 injured. Harris and Klebold had planned to kill 500, and had placed two propane bombs in duffel bags in the school’s cafeteria to explode prior to the shooting. The bombs had enough explosive force to collapse the room, but fortunately failed to detonate.

• Social outcasts who pride themselves on exclusion from popular circles
• Often bullied, teased, and/or rejected
• May come across as shy or quiet, occasionally acting out aggressively
• Rejection sensitivity- perceiving more hostility in ambiguous comments than is actually present
• Experiences depression
• Declining social functioning
• Attitude of superiority
• Exaggerated sense of entitlement
• Failed love relationship
• Capacity to dehumanize others, or picture others as “stumbling blocks”
• Poor or tense relationship with parents
• Low parental supervision / involvement
• Low verbal aptitude
• Captivated by weapons, bombs, paramilitary techniques
• Possible links to, or interest in, Satanist cults, Nazism
• Often keep personal journals of thoughts and feelings of rejection, violence
• Fantasies involve violent retribution against oppressors
• Fans of violent media, especially first-person shooter games
• Often threaten or brag about shooting spree before it occurs
• Prone to act with one accomplice, or a small group of accomplices
• Violent and dark themes present in school work, personal writing, humor, drawings, or doodles
• Cruelty to animals
• Has experienced discipline from the school, suspension or expulsion
• May have attempted or threatened suicide

PROFILE AND CHARACTERISTICS OF WORKPLACE SHOOTERS

Rationales behind multiple-shooting events vary greatly, and should be watched for diligently by officers in the hopes of preventing a shooting. But when a situation does arise, law enforcement must move immediately, swiftly, and purposefully to prevent as much harm to innocent people as possible. Saving lives is the primary objective.

The first responding officer on the scene of an active shooter episode must critically evaluate the situation and confirm it for what it is. The officer has to decide whether to act or direct based on the information at hand, by answering questions such as:

• Is there an on-going systematic killing or critical injuring of others at the scene?
• Are additional potential victims within the building?
• Can those suspects be reached quickly and effectively?

If the threat can’t be stopped, try to isolate and contain it, and await backup. Support should come in the form of a contact team, whose job it is to confront the suspect and stop the deadly behavior.

An active shooter does not hide, allowing law enforcement to locate a subject(s) quickly. Once the shooting has been stopped, a contact team should also:
• Limit the suspect’s movement
• Prevent his escape
• Communicate progress to responders
• Provide preliminary assessment (dynamic intelligence)
• Give victim locations and medical needs if time permits
• Report explosives types and locations
• Offer descriptions and locations of suspects
• Describe weapons of shooter(s)

A rescue team then operates to recover casualties by entering or approaching to locate victims, extracts victims to a safe area and notifies the incident commander and medical personnel. In the case of multiple victims, the rescue team may need to be expanded. Custody and control of the situation must be emphasized by the rescue team, and a system of identifying and accounting for victims must be put in place.

Upon entry, teams can expect to contend with:

If explosives are encountered, they need to be visually inspected for potential detonation (trip wires, timing devices, lit fuses, etc.) and identified. The location of the device should be reported and an officer should be posted as soon as possible to control the area. Do not touch the device. Restrict radio use because explosives are sensitive to radio waves. Contact and rescue teams should move past any devices.

When deploying, a team should be composed of two to five officers. As officers arrive on the scene, as many teams as are necessary to control the situation can be formed. Teams should deploy in a manner that gets them to the shooter quickly, and offers a tactical advantage.

There are many officer training classes on active shooter scenarios sponsored by various agencies. Additional and hands-on training can be garnered at these events. Several institutions also distribute active shooter-related videos or CD-ROMs to law
enforcement agencies.

Clearly, each scenario involving an active shooter poses a unique set of dangers. Officers must make quick, but careful decisions that keep safety, both for potential victims and for law enforcement, at top priority. It is a good idea to train for team deployments in active shooter scenarios, especially plausible ones within specific jurisdictions. Also, it is wise to have building schematics available quickly in the event of a mass shooting. All officers must prepare themselves, mentally and physically, in order to effectively limit these tragedies.