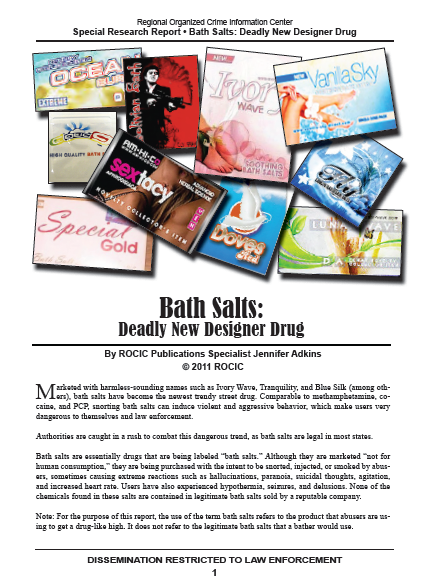 Marketed with harmless-sounding names such as Ivory Wave, Tranquility, and Blue Silk (among others), bath salts have become the newest trendy street drug. Comparable to methamphetamine, cocaine, and PCP, snorting bath salts can induce violent and aggressive behavior, which make users very dangerous to themselves and law enforcement.

Authorities are caught in a rush to combat this dangerous trend, as bath salts are legal in most states. Bath salts are essentially drugs that are being labeled “bath salts.” Although they are marketed “not for human consumption,” they are being purchased with the intent to be snorted, injected, or smoked by abusers, sometimes causing extreme reactions such as hallucinations, paranoia, suicidal thoughts, agitation, and increased heart rate. Users have also experienced hypothermia, seizures, and delusions. None of the chemicals found in these salts are contained in legitimate bath salts sold by a reputable company.

Note: For the purpose of this report, the use of the term bath salts refers to the product that abusers are using to get a drug-like high. It does not refer to the legitimate bath salts that a bather would use.

Most states list teenagers as the main users of bath salts. The Florida Poison Control Center reported that the majority of the calls concerning bath salts were being placed by individuals 16 to 20 years of age.

In addition, according to Sheriff Chris Dickinson of Itawamba County, Miss., meth addicts are also primary consumers of bath salts and can be very dangerous when high on the drugs. Sheriff Dickinson reported 30 encounters with bath salt users within two months. The bath salt problem grew in Itawamba County after a Mississippi law began restricting the sale of pseudoephedrine, a key ingredient in making methamphetamine.

At least 25 states have received calls about exposure, but it seems to be most popular in the South. Since the end of September 2010, the Louisiana Poison Control Center has received 165 calls from people in crisis after using bath salts, representing 57 percent of the calls recorded nationwide. In addition, 85 percent of those calls were from emergency room physicians or first responders. Florida followed with 38 calls and Kentucky with 23. Next in line were Mississippi, Missouri, Tennessee, Texas, and Utah.

U.S. poison centers in 25 states received 117 calls regarding bath salts during the first two weeks of 2011. Louisiana accounted for 48 percent of the calls.