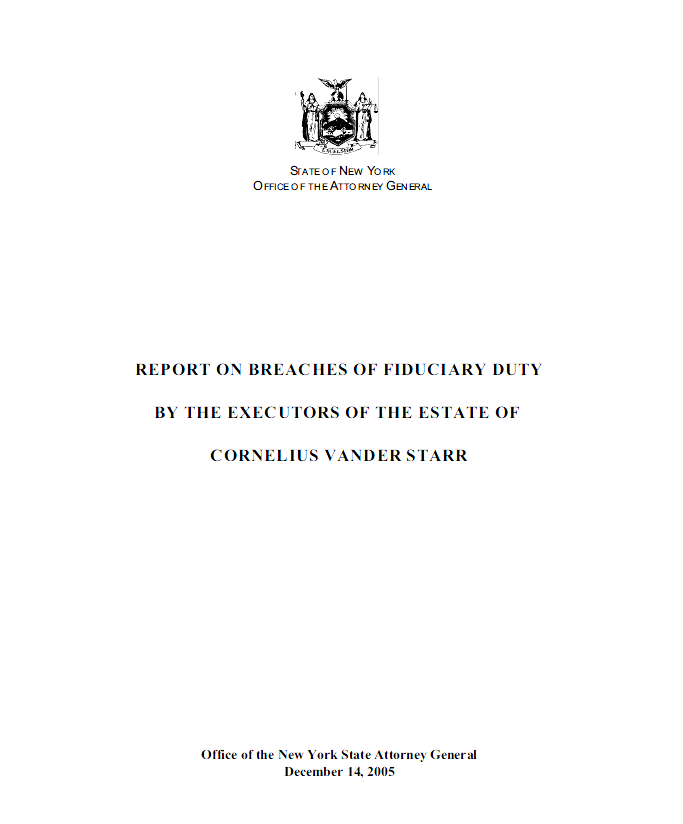 This Report sets out the facts discovered by the Office of the New York State Attorney General (the “Office” or the “Attorney General”) in an investigation of breaches of fiduciary duties by Maurice R. Greenberg and the other executors of the estate of Mr. Cornelius Vander Starr (the “Estate”) who were also directors of The Starr Foundation (the “Foundation”). Mr. Starr was the founder of a group of insurance businesses that have become American International Group, Inc. (“AIG”). The Report describes: (1) the discovery of documents evidencing breaches of fiduciary duty by the executors; (2) background relating to the Estate and the Foundation; (3) a series of self-dealing transactions through which the executors misappropriated assets from the Estate over a two-year period after Mr. Starr’s death;1 (4) Mr.
Greenberg’s failure to disclose critical facts about these transactions to the Surrogate’s Court and this Office; and (5) why an action by the Foundation to redress the injuries described herein is not time-barred.

I. Discovery of Documents Related to the Breaches of Fiduciary Duty

In early 2005, the New York Attorney General, pursuant to his authority under Article
23-A of the General Business Law of the State of New York (the “Martin Act”) and Section
63(12) of the Executive Law, issued subpoenas to AIG relating to potential misconduct in AIG’s
accounting and insurance practices. During the course of the ensuing investigation, the Attorney
General and the Securities and Exchange Commission (the “SEC”) requested information about
AIG affiliates and subsidiaries located in Bermuda.2 In response to this request, AIG counsel began reviewing documents in the company’s Bermuda building. During the week of March 21,
counsel acting on behalf of Mr. Greenberg arrived at AIG’s Bermuda building and claimed that
many of the documents being reviewed belonged to two privately-held companies that were
controlled by Mr. Greenberg and shared offices with AIG. The two sides agreed that both groups
of lawyers would review the documents but that no original documents would be removed from
the AIG building.

On March 25, Good Friday – a business holiday in Bermuda – after the team of AIG
lawyers had returned to the United States, Mr. Greenberg’s lawyers, using the electronic card key
of an AIG employee, entered the AIG building and removed approximately 80 boxes of
documents. Upon learning of the removal, the Attorney General and the SEC issued subpoenas
for documents removed from the AIG building. Among them were key confidential documents,
including meeting minutes and correspondence, that raised questions about whether the Estate
had been appropriately compensated for certain assets. The documents triggered further review
by the Attorney General, and the ensuing investigation revealed that Mr. Greenberg and the other
executors of Mr. Starr’s Estate abdicated their fiduciary duties by selling certain assets of the
Estate to companies the executors owned and controlled for unreasonably low prices in light of
the value the executors themselves were able to realize when their companies sold the same or
similar assets.

Beginning in 1919, Mr. Starr founded a group of insurance businesses that eventually
became AIG. In the 1960s, he began a process of consolidating his insurance businesses and
chose Mr. Greenberg as his successor. Upon Mr. Starr’s death in 1968, most of his insurance businesses had been gathered into three companies that Mr. Greenberg and other associates of
Mr. Starr controlled: (1) C.V. Starr & Co., Inc. (“CVSCO”), a private company that owned
domestic insurance agencies; (2) Starr International Company, Inc. (“SICO”)3, a private company
that owned foreign insurance agencies; and (3) American International Reinsurance Company,
Inc. (“AIRCO”), a private company that owned shares in insurance companies.
Earlier in his career, Mr. Starr had established the Foundation under New York’s
Membership Corporations Law as a not-for-profit corporation dedicated to charitable,
educational and cultural purposes. Starr supported The Starr Foundation during his life and upon
his death left it virtually his entire Estate:

It is my Will that THE STARR FOUNDATION shall acquire the
remainder of my Estate, the income from which, and if need the principal
also, shall be employed for worthy charitable, educational and cultural
purposes as stated in the by-laws of THE STARR FOUNDATION.
Last Will and Testament of Cornelius Vander Starr, August 1, 1968 (the “Will”), attached as
Exhibit 1.

When they set out to dispose of the Estate’s ownership interests in CVSCO, SICO
and Far East in 1969, Mr. Greenberg and the other executors, in their role as the board of
CVSCO, were in the midst of a major corporate restructuring of the insurance businesses that
Mr. Starr had founded.

As a first step in this restructuring, AIG became a public company in early 1969
through stock-for-stock exchange offers with three publicly-held U.S. insurance companies.
Through these exchange offers, the public shareholders of the three insurance companies became
public shareholders in AIG, with AIG owning 100% of all three companies. After this step, CVSCO maintained control over AIG through its voting control of AIRCO, which in turn owned
a majority of the public stock of AIG.

The second step of the restructuring involved AIG acquiring a group of insurers and
insurance agencies from CVSCO, SICO and Far East, entities controlled by Mr. Greenberg and
the other executors, who also controlled AIG. The currency used in this acquisition was AIG
stock exchanged for the CVSCO assets, and AIRCO stock exchanged for the SICO and Far East
assets. AIG engaged the investment banking firm of Morgan Stanley & Co. (“Morgan Stanley”)
to issue an opinion as to the fairness of the transaction from the point of view of AIG’s public
shareholders. Work on analysis that supported the fairness opinion began not later than the
summer of 1969. Morgan Stanley issued a “preliminary report” of its analysis on October 24,
1969 (November 5, 1969 Notes on Minutes of Directors Meeting, attached as Exhibit 4) and
issued the final fairness opinion dated February 19, 1970 (attached as Exhibit 5). Morgan
Stanley reiterated its opinion that the transaction was “fair and reasonable” on May 29, 1970
(Letter dated May 29, 1970, attached as Exhibit 6), and the transaction closed on June 30, 1970
(the “June 1970 Transaction”). Through the June 1970 Transaction, AIG acquired a world-wide
network of insurance agencies founded by Mr. Starr. Furthermore, the CVSCO directors
solidified their control over AIG through the receipt by CVSCO and SICO of large blocks of AIG
and AIRCO stock.

At the time of his death, Mr. Starr owned a substantial portion of the assets that AIG
ultimately acquired in the June 1970 Transaction. His ownership was reflected in shares of each
of the entities involved – Far East, CVSCO and SICO. The major business assets of each of
these entities were sold to AIG in the June 1970 Transaction. The Estate’s disadvantageous sale of its shares in each of these entities to CVSCO and SICO is the focus of this Report.
The executors were in a unique position to understand the value of the Estate’s
holdings in Far East, CVSCO and SICO for two reasons. First, as directors of CVSCO, they
were responsible for coordinating and controlling Mr. Starr’s worldwide insurance enterprise.
Second, the executors – acting on behalf of AIG – had engaged Morgan Stanley to opine as to the
fairness of the price to be paid by AIG for the CVSCO and SICO businesses in the June 1970
Transaction.