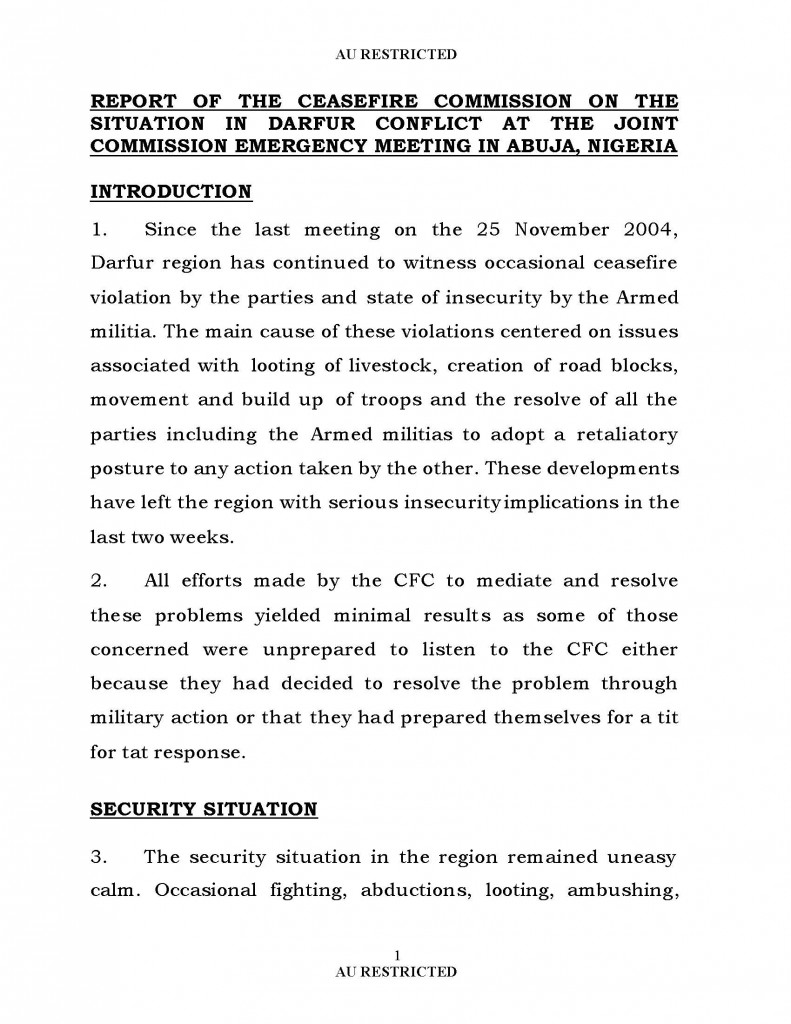 REPORT OF THE CEASEFIRE COMMISSION ON THE SITUATION IN DARFUR CONFLICT AT THE JOINT COMMISSION EMERGENCY MEETING IN ABUJA, NIGERIA

1. Since the last meeting on the 25 November 2004, Darfur region has continued to witness occasional ceasefire violation by the parties and state of insecurity by the Armed militia. The main cause of these violations centered on issues associated with looting of livestock, creation of road blocks, movement and build up of troops and the resolve of all the parties including the Armed militias to adopt a retaliatory posture to any action taken by the other. These developments have left the region with serious insecurity implications in the last two weeks.

2. All efforts made by the CFC to mediate and resolve these problems yielded minimal results as some of those concerned were unprepared to listen to the CFC either because they had decided to resolve the problem through military action or that they had prepared themselves for a tit for tat response.

3. The security situation in the region remained uneasy calm. Occasional fighting, abductions, looting, ambushing, blocking of roads and military build up has created a serious security situation in the last two weeks. Some members of the International Community have started leaving the region because of the speed and intensity of build up of forces by the Government and the reciprocal build up by SLA and JEM in
Labado and Mahajiriya, which are seen by many as the main battle ground.

4. The SLA attack on Save the Children (UK) has frightened other NGOs to the extent that they have decided to suspend all aid to the needy. All attempts to persuade some SLA Commanders through their Representative in the Ceasefire Commission to stop all activities that are capable of causing insecurity in Darfur have so far failed. Some of the combatants have continued with their habit of snatching vehicles.

5. The quantity of arms and ammunition brought into Darfur to meet the present build up of troops in the region is astronomical that the issue is no longer whether there will be fighting or not but when will the fighting start.

EVENTS OF THE PAST TWO WEEKS

6. The Armed militia supported by the GOS attacked Adwah on 29 November 2004. The GOS air assets were employed during the attack. Investigation revealed that Adwah was attacked by approximately 500 Armed militia to recover alleged stolen camels/livestock. Two corpses were found and 23 wounded civilians were evacuated to Nyala by MILOBs. No camels were found in the village but looted items
including trucks were recovered from the village. In the process of moving into Adwah for investigation, Lt Col Tchtacho, a Chadian MILOB was shot on the right shoulder from the village. The officer sustained minor injuries. The Commander of the GOS military command located 2km from the village denied any involvement but claimed to be test firing their newly acquired 12.7mm machine gun. The Vice Chairman and CFC members visited Duma and Adwah on 4 December 2004 while the Force Commander and members of CFC visited same area on 7 December 2004 all in an effort to reduce tension in the area.

7. The SLA on 29 November 2004 reported to the CFC the arrest of one Armed militia who was part of a group terrorizing civilians in the area of Thabit. SLA handed over the man to CFC at Thabit for further investigation. The alleged Armed militia was handed over to the Attorney General in El-Fashir on 01 December 2004 for further investigation and trial.

8. On 2 December 2004 Sector 4 in Kabkabiyah informed HQ CFC of an impending attack on Kabkabiyah market and CFC Camp should the Sector intervene on the planned attack on the market. The Sector did not however take any chances as it immediately fortified the camp in readiness for any such attempt. Some NGO’s moved into CFC Camp for protection while members of CFC led by the Vice Chairman visited the Western Area Commander during which he was informed of the development in Kabkabiyah. The team flew to Kabkabiyah where it met with leaders of the Armed militia and discussed security issues in the town. The Arab leaders were duly informed of the readiness of AMIS to protect the civilians if attacked and also the resolve of AMIS to defend itself if attacked. The Arab leaders and CFC members were however
able to resolve the security issues amicably. Kabkabiyah is the only Sector with full complement of its Protection Force in the Mission. On 11 December 2004, about 500 women marched to Sector 4 Headquarters in Kabkabiyah to demonstrate their support for AMIS for the continuous peace being enjoyed in Kabkabiyah. This is the second time they have demonstrated their support for the AU.

9. On 5 December 2004, 5 local staff of Save the Children (UK) were attacked on Kas-Nyala road. Investigation revealed that some Armed militias were responsible for the attack. Two women were allegedly raped by the attackers. One out of the injured men was rescued and moved to Nyala by MILOBs.

11. On the midnight of 7/8 December 2004, a convoy of GoS troops in over 40 vehicles departed El-Fashir for Nyala as part of the build up of forces in Southern Darfur. The GoS Representative in the Ceasefire Commission was confronted on this development but he could not provide answers. At about 0100hrs on 8 December 2004, Commander Western Area Command sent a letter to my residence, informing me of a military operation to clear the roads blocked by the SLA which was to begin that morning. This was difficult for me to understand because the information was the same day the operation began. I quickly contacted General Al-Dabi the Deputy Representative of the President on D arfur and he looked surprised and explained he was unaware of any such operation. He made frantic effort to reach Khartoum and when he eventually did, he was promised an action would be taken to stop the operation. However, Khartoum did not reverse or rescind the directive probably due to the pressure from the various civilian administration in Darfur who have continuously complained of increase in the price of commodities as a result of insecurity on the roads.