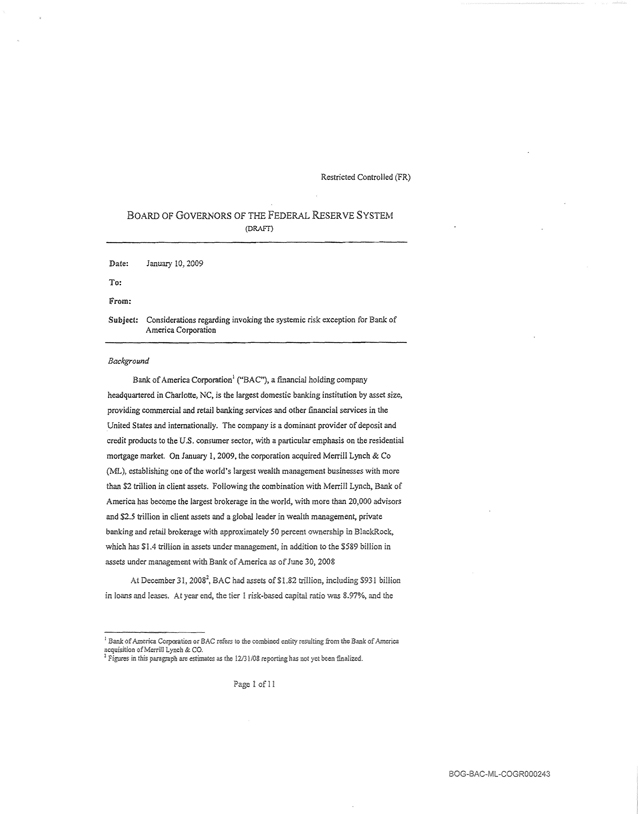 Board of Governors of the Federal Reserve System

Bank of America Corporation (“BAC”), a financial holding company headquartered in Charlotte, NC, is the largest domestic banking institution by asset size, providing commercial and retail banking services and other financial services in the United States and internationally. The company is a dominant provider of deposit and credit products to the U.S. consumer sector, with a particular emphasis on the residential mortgage market. On January 1, 2009, the corporation acquired Merrill Lynch & Co (ML), establishing one of the world’s largest wealth management businesses with more than $2 trillion in client assets. Following the combination with Merrill Lynch, Bank of America has become the largest brokerage in the world, wi!.h more than 20,000 advisors and $2.5 trillion in client assets and a global leader in wealth management, private banking and retail brokerage with approximately 50 percent ownership in BlackRock, which has $1.4 trillion in assets under management, in addition to the $589 billion in assets under management with Bank of America as of June 30, 2008

At December 31, BAC had assets of $1.82 trillion, including $931 billion in loans and leases.  At year end, the tier 1 risk-based capital ratio was 8.97%, and the tangible common equity ratio was 2.83%. Following the addition off ML, the equivalent proforma capital ratios are 8.52% and 2.55%, respectively.

Beginning in the second half of2007, BAC and ML started experiencing the challenges of the market turmoil and economic deterioration. ML was particularly impacted by the dislocation in the wholesale funding markets that was considerably acute for standalone broker dealers. The dislocation also had a significant negative impact on both companies’ structured credit holdings and securities backed by real estate-related assets. Tne continued weakening economic conditions have required significant provision builds at BAC to accommodate for deteriorating credit quality. Given the firm’s sizeable exposure to the consumer sector, it is likely this trend will continue. While legacy BAC has been marginally profitable throughout this period, ML has reported significant losses. BAC’s net income for the first three quarters of 2008 totaled $5.8 billion, while for the same period ML reported losses of$11.8 billion.

ML reported a $5.2 billion net loss for the third quarter of 2008 compared to a net loss of$2.2 billion for the same quarter one year earlier. The third quarter 2008 loss reflects $5.7 billion in net write downs from its sale of U.S. super senior ASS CDOs and the termination and potential settlement of related hedges with monoline guarantors. ML also recorded net write downs of $3.8 billion, reflecting the market dislocations in September and the associated real estate-related write downs and net losses related to GSEs, and U.S. broker dealers. An additional net loss of 2.6 billion resulted from sales of residential and commercial mortgage exposures. The aforementioned write downs were partially offset by a net pre-tax gain of$4.3 billion from the sale of ML’s 20% stake in Bloomberg and a $2.8 net gain from the impact of the widening of ML’s credit spreads on the carrying ration of certain of its long-term debt securities.

The $11.8 billion net loss for the first nine months of 2008 reflect net losses related to U.S. ABS CDOs of $9.8 billion, credit valuation adjustments related to hedges with monoline financial guarantors of $7.2 billion, net losses on residential and commercial mortgage exposures of $5.1 billion, $2.9 billion in net losses on the securities portfolio, 32.1 billion related to major U.S. broker dealers and certain GSEs, and leveraged finance commitments write-downs of $1.8 billion. These losses were partially offset by a net gain of $5.0 billion from the widening of credit spreads on the carrying value of certain of ML’s long-term debt liabilities and the aforementioned sale of its 20% stake in Bloomberg.

The firm is the largest deposit holder in the United States. As of December 31, 2008, legacy BAC reported $883 billion of deposits, with ML adding an additional $97 billion. Deposits include $193 billion of consumer time deposits, $125 billion of personal checking balances, and $106 billion of personal money market savings. The amount of retail and corporate deposits greater than $250,000 is $93 billion. As of yearend, legacy BAC and ML held approximately $48 billion ($32 billion in business MMDAs) and $64 billion, respectively (all sweep) both sources are historically more vulnerable in a counterparty “pull away”. In addition, BAC has identified $4 billion in deposits collateralizing RESI (on-balance sheet synthetic securitizations) transactions that will be witMrawn if their short-term senior unsecured debt rating drops below A1/P1/F1, or their long-term senior unsecured debt rating drops below NA2JA by S&P, Moody’s and Fitch, respectively.

BAC’s long tem debt is $453 billion, with 18 percent maturing in 2009 and a further 16 percent maturing before the end of 2010. SAC’s !argest immediate unsecured funding exposure is overnight Federal Funds and Eurodollars purchased.  As of January 8, 2009, BAC had a Federal Funds and Eurodollars purchased position 0f $68 billion. Recently, the institution has been a large net taker of funds, mostly, to take advantage of the spread between price and interest paid on its Federal Reserve account, where SAC holds a balance of$83 billion.