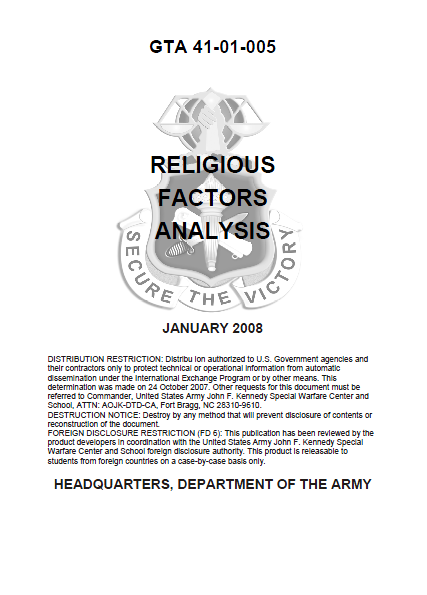 Since 9/11, ARSOF have been at the forefront of the War on Terrorism. They are recognized as one of the greatest force multipliers in the United States (U.S.) military arsenal, because of their expertise in military operations, which ranges from counterinsurgency to nation building.

The War on Terrorism has made U.S. leaders more aware of the importance of religious identity and caused them to increasingly focus on religious ideology. Secretary of Defense Donald Rumsfeld’s 2 February 2006 press conference addressed the need to counter the religious ideology of extremist Islamic groups. Doing so will require not only a deeper understanding of religion’s effects upon society than is currently provided by intelligence analyses and products but also an increased emphasis on including religious factors in mission planning. The changing dynamics of conflict are driving a profound change in ARSOF operations. Finding the center of gravity (COG) of the conflict may require translating unfamiliar religious traditions into mission factors. Religion, in the form of nonstate actors, faith-based transnational networks, polygonal insurgency operations, and transcendent ideology, challenges the power of secular organizations.

Given religion’s complexity and power, it is imperative that ARSOF understand the way it shapes modern warfare and the modern battlefield. There are several reasons for religion’s ability to shape the battlefield:

• Religion answers some of life’s big questions, such as why there is death and war. Religion is relevant to all conflict.
• Religion adds a higher intensity, severity, brutality, and lethality to conflict than other factors do.
• Religion offers a stronger identity to participants in conflicts than nationality, ethnicity, politics, or language.
• Religion can motivate the masses quickly and cheaply, and it often remains outside the view of nation-state security forces.
• Religion offers an ideology—or a platform for a political ideology—that resonates more strongly than other forms of propaganda. Theology will trump ideology in most conflicts.
• Religious leaders are often the last leaders left when states fail, and they offer a voice to the disempowered or oppressed.
• Religious leaders are often the first to seek peace and reconciliation after a conflict. 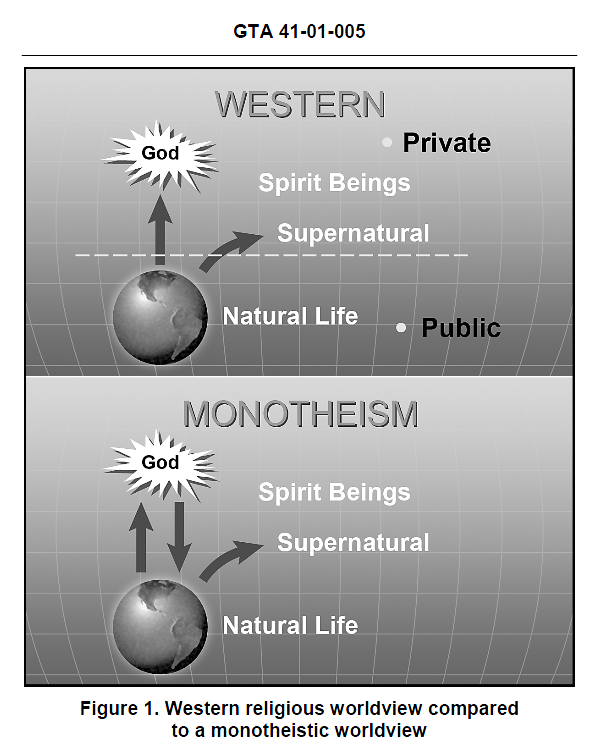 Crisis action planning often necessitates modification of either the military decision-making process or joint operation-planning process, either because of time constraints or the direction of the commander.
Whatever the cause, expedient planning should never totally omit an initial, even if abbreviated, RFA of the targeted AO. Available information may come from either classified or open sources, may be dated, or may be unverifiable, forcing the development of planning assumptions prior to deployment.

In a time-constrained planning environment, certain key RFA information will—

• Contribute to the overall civil considerations analysis and the IPB process.
• Enhance cultural awareness of the AO.
• Identify key leaders, communicators, and spheres of influence.
• Contribute to both the lethal and nonlethal targeting process.
• Assist in populace and resource-control planning.
• Provide the basis for a more in-depth analysis.

Figure 8, pages 33 through 36, is a suggested expedient RFA template.

It uses the complete template (Figure 9, pages 37 through 44) as a source document. As with any assessment and analysis process continuous information gathering is essential upon entry into the AO to validate the initial assessment and satisfy identified information gaps.