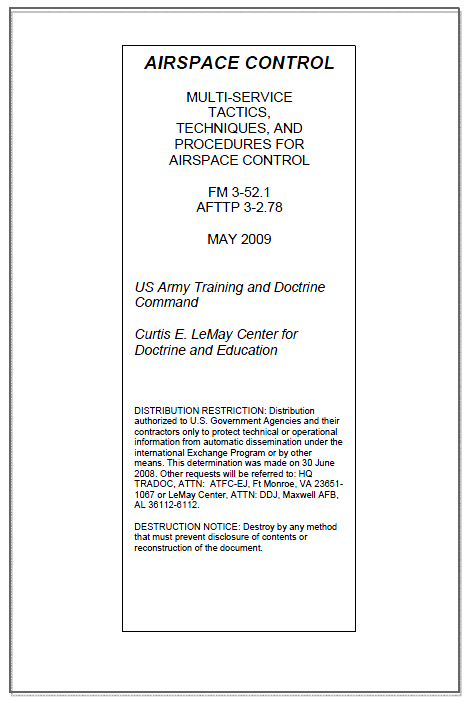 This multi-Service tactics, techniques, and procedures (MTTP) publication facilitates multi-Service coordination, integration, and regulation of airspace during exercises and operations where more than one Service shares airspace for operational use.

This MTTP publication is a tactical-level document to synchronize and integrate airspace command and control functions and serves as a single source reference for planners and commanders at all levels. It synchronizes airspace control roles and responsibilities within the campaign plan while unifying individual Service doctrine and TTP for airspace control planning and execution. In addition, it provides planning, assignment, execution, and transition procedures to address specific complex and unique airspace coordinating measures. This publication also outlines enabling information and communications interfaces necessary to establish integrated airspace control.

b. Integration and synchronization of all airspace users is required to establish the unity of effort necessary for effective combat operations. Historically, the primary method of airspace control and deconfliction has been to reserve airspace for each user and then ensure they remained within their assigned airspace. This method is time consuming and not responsive enough to support current dynamic operations, forcing commanders to accept risk for airspace users, operations, or both. With the proliferation of airspace users in a congested space, there may not be enough airspace to effectively divide, separate, or partition areas for deconflicted operations.

a. Joint Publication (JP) 3-52, Joint Doctrine for Airspace Control in a Combat Zone, defines airspace control in the combat zone as “a process used to increase combat effectiveness by promoting the safe, efficient, and flexible use of airspace. Airspace control is provided to reduce the risk of friendly fire, enhance air defense operations, and permit greater flexibility of operations.”

c. Airspace is inherently joint. Any action taken by an airspace user may impact other airspace users. The airspace control authority (ACA) delegates authority to control airspace to elements of the theater air ground system (TAGS). The ACA establishes an airspace control system (ACS) responsive to the needs of the JFC and integrated with the host nation (HN). “The ACS is an arrangement of those organizations, personnel, policies, procedures, and facilities required to perform airspace control functions. Airspace control should be executed through a responsive theater/tactical air control system capable of real time control that includes surface and airborne assets, as necessary (e.g., CRC and AWACS). The ACS requires timely exchange of information through reliable, secure, and interoperable communications networks. Elements of the ACS may have dual-roles as DCA assets (e.g., a CRC can be a SADC).” (JP 3-01)

d. The definition of coordinating altitude in JP 3-52 is “a procedural airspace control method to separate fixed- and rotary-wing aircraft by determining an altitude below which fixed-wing aircraft will normally not fly and above which rotary-wing aircraft normally will not fly.” Current Operation Iraqi Freedom (OIF)/Operation Enduring Freedom (OEF) operations use the term “coordinating altitude” as the vertical limit between airspace controlling agencies [i.e., the top of Army controlled airspace and the bottom of control and reporting center (CRC) controlled airspace]. The current theater usage is outside the JP 3-52 doctrinal definition.