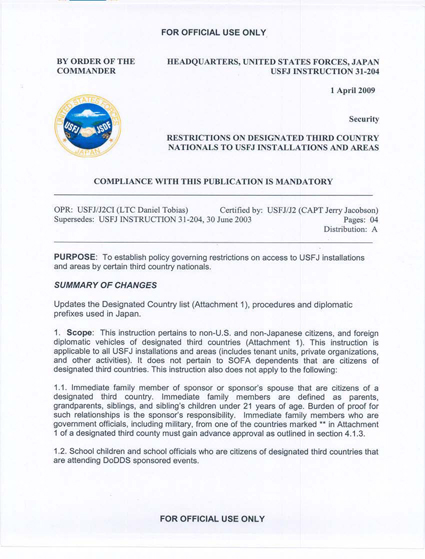 1.2. School children and school officials who are citizens of designated third countries that are attending DoDDS sponsored events.

1.3. Officially sponsored visitors reported to the GOJ in accordance with HQ USFJ Inst 90-205 (Entry and Exit of Individuals. Cargo, Aircraft and Surface Vessels), paragraph 10.6. when a planned visit meets the criteria stated in paragraph 10.6.1. and 10.6.2. of HQ
USFJ Inst 90-205, the concerned u.S. agency or organization in the Third State interested in effecting the visit will initiate preliminary inquiries through the host service Commander (U.S. Army Japan, Commander Naval Forces Japan, Fifth Air Force, or
Marine Forces Japan, etc.) to ensure proper coordination of the proposed visit. Each such inquiry will contain the following information:

2.1. Commanders for respective components, installations. and activities under USFJ, establish guidelines for entry into installations under their command by non-SOFA U.S. persons, Japanese nationals, and non-SOFA citizens of third countries, which are not referenced in Attachment 1. In addition. commanders will develop their own procedures for the exceptions contained in paragraph 1.1 and 1.2. Such policies will be coordinated through the USFJ Provost Marshal’s office (USFJ/J023).

2.2. Entry onto USFJ installations/areas by non-SOFA personnel from designated third countries (Attachment 1) Is not authorized without prior coordination with the installation counterintelligence agency and subsequent approval of the installation commander (or delegate). Determination to grant entry will be made on a case-by-case basis using guidance set forth in this instruction. Guests and visitors from countries identified in this installation invited by COMUSJAPAN, Deputy, or Service Component Commanders as
part of official USFJ or service component ceremonies or meetings do not require Installation Commander Approval but stili require USFJ J51PACOM approval. However, notification, to include a list of all attendees, will be made to the respective Installation Commander and counterintelligence organization for screening. 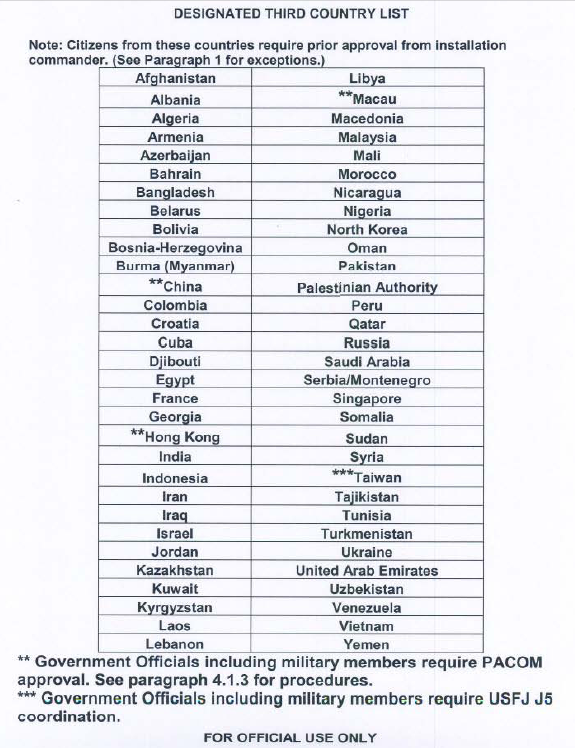 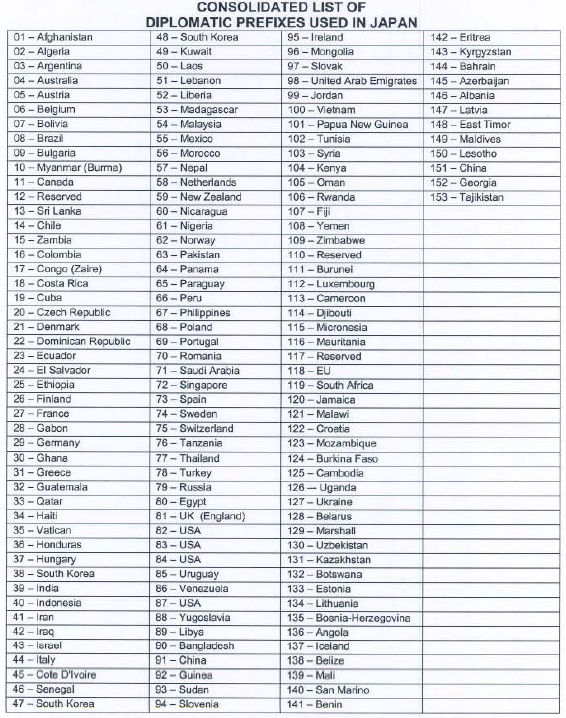