This report on the U.S. Army’s Human Terrain System from the Center for Naval Analyses was originally posted on the Defense Technical Information Center (DTIC) website. However, it was removed within twenty-four hours and replaced with a message stating:

The resource you requested has been withdrawn for administrative reasons. For additional information, contact the DTIC help desk at 800-225-3842 or help@dtic.mil. No full text document exists for this AD Number.

For more information on the document, see John Stanton’s article on the subject. 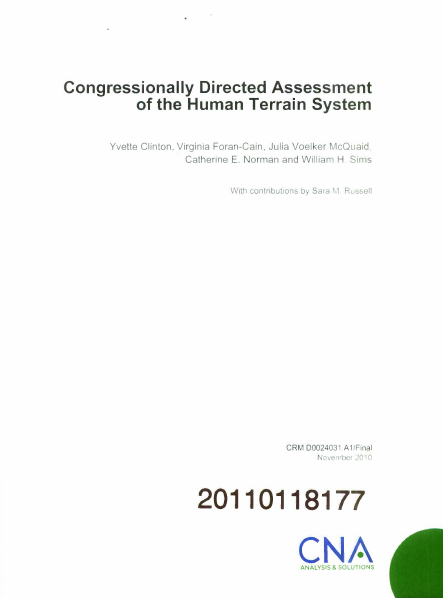 • Overview of HTS organization, including related technology development efforts
• Adequacy of the management structure for HTS
• Metrics used to evaluate each of the components of HTS
• Adequacy of human resources and recruiting efforts
• Identification of skills that are not resident in government or military positions, and how the U.S. Army can leverage academic networks or contracting opportunities to fill these gaps
• Identification of policy or regulatory issues hindering program execution”

The Human Terrain System is a U.S. Army project intended to provide military decisionmakers in Iraq and Afghanistan with greater understanding of the local population’s cultures and perspectives. HTS deploys Human Terrain Teams (HTTs) of five to nine civilian and military personnel to support brigade, division, and theater-level staffs and commanders with operationally relevant information. The program also provides training for deploying personnel, reachback analysis, and software tools developed by HTS to support socio-cultural analysis. HTS emphasizes the use of tools and approaches commonly associated with the academic disciplines of anthropology and sociology’ in its efforts to collect and analyze data about local populations.

Nearly four years into its existence, it is clear that the program has had its share of ups and downs. The intent of this assessment is to provide Congress with accurate and objective information on specific aspects of the HTS program and insight into HTS’s operations and effectiveness.

Based on our assessment of the six elements in the CDA, we present the following overall conclusions concerning HTS:

First, the HTS program has been, in many ways, a success. It is a unique and dynamic program, and its leadership and staff have been able to generate a new and innovative capability within a bureaucratic environment that is not always open to such initiatives. In our interactions with HTS personnel and staff, we consistently came across individuals who were deeply committed to the mission, which most likely has also contributed to its successes. The program also has support within the Army leadership. General David Petraeus, who recendy became commander of International Security Assistance Force in Afghanistan, is a staunch supporter. There are some indications in the data we collected for this assessment that this capability fills a gap for the war-fighter and therefore has made an important contribution to U.S. military operations in Iraq and Afghanistan.

Second, the program remains the target of criticism. Part of this appears to stem from specific incidents and poor decisions that have occurred within the program, such as sending unqualified personnel into combat zones. Our analysis suggests that poor internal communications and the absence of an overall outreach or communications strategy may also be contributing to a misunderstanding of the program’s goals and operations. This may also account for some criticism.

Criticism of the program is also reasonable in that during the rush to create, train, and deploy teams, the operational tempo (OPTEMPO) of the organization in its first several years meant that many of the processes and procedures typically implemented by a new Department of Defense (DoD) program were either not completed or did not take place in the proper order.

Our assessment indicates that, at least in recent years, the management relationship between the Army’s Training and Doctrine Command (TRADOC) and its HTS subsidiary has been problematic.

It appears that HTS’s most significant problems revolve around human resourcing and the level of support provided to HTS by TRADOC.’ We believe that solutions to these immediate issues exist. We emphasize, however that, these issues are not new. Problems in human resourcing and support have been evident in HTS for years—and little has been done to address them to date. As a result, we conclude that a more fundamental problem may exist: there may be a lack of TRADOC institutional commitment to making HTS a success. Hence, while further exploration would need to be conducted to determine this definitively, it is possible that the HTS mission would be better served if HTS were located elsewhere, but potential alternatives are beyond the scope of this assessment.

While HTS faces significant internal problems, it appears the program continues to have strong support from perhaps its most significant constituent: commanders in the field.