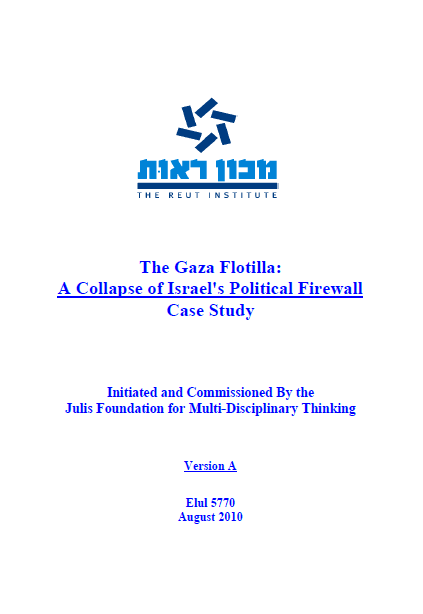 This case-study deals with a strategic political strike against the State of Israel that was planned without interruption since February 2009 and materialized on May 31, 2010. Known as the Gaza Flotilla, this effort exceeded the expectations of its organizers in causing tangible and significant damage to Israel.

Planning of the Gaza Flotilla was carried out over the internet and in public conferences by non-governmental organizations (NGOs) primarily operating from major cities of countries friendly to Israel, including London, Dublin or San Francisco.

In the broader context, the Gaza Flotilla was just the tip of the iceberg. It is one incident out of many in a campaign entitled ‘Lifeline to Gaza’ designed to break the ‘siege’ of Gaza. The campaign itself is one of several being waged against Israel. Others include the Boycott, Divestment, Sanctions (BDS) Movement, the ‘lawfare’ strategy, and the Durban conferences.

Together, these campaigns and others form a global systematic and systemic attack against Israel and its political-economic model. Their form continually shifts and adapts and their momentum is gaining. Their ultimate aim is to delegitimize Israel in order to precipitate its implosion, inspired by the collapses of countries such as the Soviet Union and apartheid South Africa.

This attack is executed by two forces, acting in parallel and with cooperation. The first is the Resistance Network, led by Iran, Hamas, and Hezbollah, that rejects Israel’s right to exist based on Arab and Islamist nationalist-religious ideology. The second is the Delegitimization Network, which is primarily concentrated in a few major cities such as London, Brussels or the San Francisco Bay Area, and denies Israel’s right of existence based on political, philosophical or historical arguments.

9. In recent years, Israel has been facing a new challenge based on the ripening of two processes:
– The increased sophistication and efficiency of Hamas and the Resistance Network’s ‘Logic of Implosion.’ This logic aims to precipitate Israel’s internal collapse through ‘overstretch,’ by preventing an end to its control over the Palestinian population; by advancing its delegitimization; and by developing a doctrine for a-symmetric warfare on the battlefield and against Israel’s civilian population. The inspiration for this logic lies in the collapse of the Soviet Union and apartheid South Africa;
– The evolution of the Delegitimization Network. This network aims to turn Israel into a pariah state so it will ultimately cease to exist. It is based in a number of metropolitan cities, within which a relatively small number of individuals and organizations mobilize the assault on Israel’s legitimacy. The Delegitimization Network’s success lies in its ability to harness the Western liberal and progressive elite. It does so by employing a variety of means aimed at blurring its true intentions;
Both sets of ideas are increasingly sophisticated, ripe and coherent, even if there is no evidence that they represent an explicit strategy with operational objectives, timelines, or milestones.

10. In recent years, the Resistance Network and the Delegitimization Network have begun to collaborate creating a feed-back loop that accelerates the following dynamics:
– Promoting the one-state paradigm – While the Resistance Network undermines any attempt to separate Israel and the Palestinians based on the Two-State Solution, the Delegitimization Network frames Israel as a pariah state and advances the One-State paradigm;
– Tying Israel’s hands in contending with Hamas in Gaza (or Hezbollahstan in Lebanon) – While the Resistance Network works towards strengthening the ‘Hamastan’ or Hezbollahstan models as a front for its ideological and military struggle against Israel, the Delegitimization Network ties Israel’s hands by constraining its political and military maneuverability and by granting legitimacy to Hamas or Hezbollah.

11. These groups are leading a systemic and systematic attack against Israel’s political and economic model, which has already had strategic consequences and may become existential if ignored or inadequately addressed.

12. Moreover, Israel suffers from strategic conceptual inferiority in contending with this threat. In other words, Israel has no effective response to the challenge it faces. This inferiority has caused Israel to repeatedly suffer from political and diplomatic disappointments, despite evident quantitative and qualitative military, technological, and economic superiority. For example, Israel’s ability to defend itself militarily has been compromised; its sovereignty has been challenged by increased international involvement in its domestic issues and the leveraging of universal jurisdiction against it; and it faces the risk of boycotts.

40. It takes a network to fight a network – The delegitimization campaign against Israel is carried out by a network of NGOs based in a number of international metropolitan cities. Disrupting this network should become the main anti-delegitimization focus. This should be done by:
– Training Israeli diplomats to work in hubs – Israel should identify hubs of delegitimization around the world and divert significant resources to them. It should focus on undermining catalyst activities and splitting up the network’s different components, primarily by making the essential distinction between critics of Israeli policy and delegitimizers;
– Cultivating Israel’s own network on the basis of the diplomatic establishment and a network of ‘informal ambassadors’ comprising of individuals and NGOs.

41. ‘Re-branding’ Israel is critical for the battle against delegitimization, as well as for Israel’s ability to communicate its messages effectively and for disrupting the Delegitimization Network’s ability to fulfill its goals.

42. Engaging the liberal progressive elite – Western forces promoting Israel’s delegitimization possess marginal political power. However, they ‘punch above their weight’ due to their ability to mobilize an array of liberal and progressive elite groups and activists into adopting anti-Israel positions and lending their support to anti-Israel movements. Therefore, Israel and its allies should focus their efforts on engaging this key sector by:
– Creating a set of personal relationships with the local elite through official channels and through private organizations and individuals;
– Substantively engaging with criticism of Israeli policy, primarily by human-rights organizations by ensuring accessibility and providing factual and relevant responses. Israel often gives critics the cold shoulder, thus pushing them into the outstretched arms of the delegitimizers;
– ‘Naming and shaming’ delegitimizers and exposing their activities in order to isolate and marginalize them;

59. Israel is dealing with the parallel ripening of two processes:
– The successes accumulated by the Delegitimization Network, which opposes Israel’s existence based on a variety of political, ideological, and philosophical principles. Western-based radical leftist elements shape and lead the Delegitimization Network, with the aim of turning Israel into a pariah state. To this end, they purposefully advance the association of the state with the South African apartheid regime in order to undermine the legitimacy of Israel’s existence;
– The efficacy of the ‘Strategy of Implosion’ advanced by the Resistance Network – led by Iran, Hezbollah, and Hamas – which rejects Israel’s existence based on Islamist and Arab-nationalist ideology. The Resistance Network aspires to precipitate Israel’s implosion by means of ‘overstretch’: sabotaging processes aimed at ending Israel’s control over Palestinians, advancing Israel’s delegitimization, and developing means of asymmetric warfare deployed against Israel’s military and civilian population.

60. The Reut Institute contends that combined, these forces represent a political-diplomatic strategic threat that may become existential. Resistance Network leaders repeatedly and publicly declare their goal of causing Israel’s implosion inspired by precedents set by the Soviet Union, South Africa, and other countries. This logic is ripening into a strategy that is yielding tangible gains.