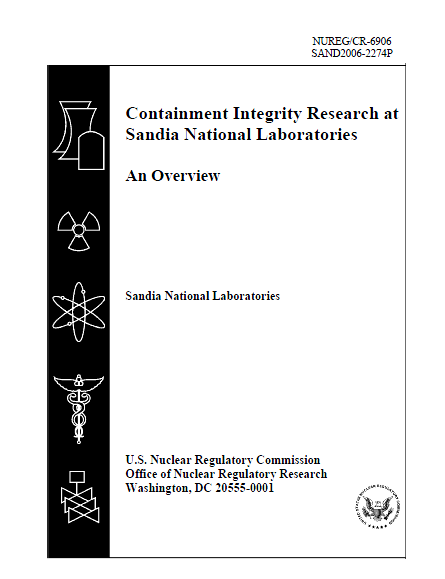 Research into the integrity of containment structures or vessels for nuclear power plants has been conducted around the world in those countries where nuclear energy is produced and provides, or is expected to provide, a significant portion of the domestic energy supply. While the contributions of each of these efforts to the understanding of the role of containment in ensuring the safe operation on nuclear power plants is important, the most comprehensive experimental effort has been conducted at Sandia National Laboratories, primarily under the sponsorship of the US Nuclear Regulatory Commission (NRC). This report describes the background and context for the more than 25 years of NRC-sponsored Containment Integrity Research at Sandia National Laboratories and summarizes the major results of the experimental efforts and the observations and insights gained from the analytical efforts.

Beginning in the 1950’s, the US Atomic Energy Commission and its successor, the NRC,
established the safety requirements for US nuclear power reactors. The safety strategy that
emerged became know as ‘defense in depth’. The elements of ‘defense in depth’ included
accident prevention, redundancy of safety systems, containment, accident management and
remote siting/emergency planning (sheltering and evacuation). Along with defining the rules
which governed design, construction and operation and licensing and regulating the plants, the
NRC engaged in an extensive research program to investigate safety issues associated with highly
unlikely events, such as the complete rupture of the pressure vessel, which were not considered in
the design of the plants. While research into the performance of the containment to resist these
‘beyond-design-basis’ loads had already been initiated, the accident in 1979 at Unit 2 of the Three
Mile Island nuclear power plant in Pennsylvania, gave new impetus to this research.

All of the 103 operating nuclear power plants in the United States are light-water reactors, either
pressurized water reactors (69) or boiling water reactors (34). Each of these plants includes either
a steel or steel-lined, reinforced concrete containment as the final barrier against the release of
radio-nuclides to the environment. The reinforced concrete containments use either conventional
or prestressed/posttensioned reinforcing. The containments are designed to accommodate the
pressures associated with a loss of coolant accident by either having large volumes, as in the large
dry and subatmospheric containments, or by utilizing a pressure suppression system to reduce the
volume, as in the ice-condenser or the Mark-I, -II, or –III boiling water reactors which include a
suppression pool filled with water. 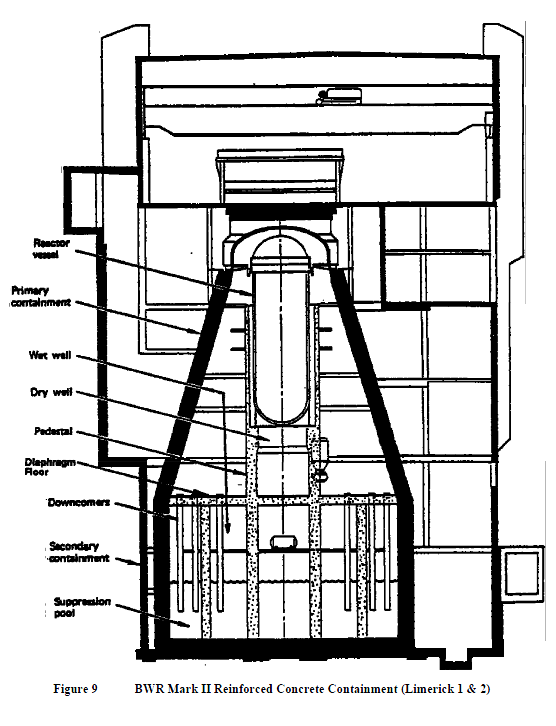