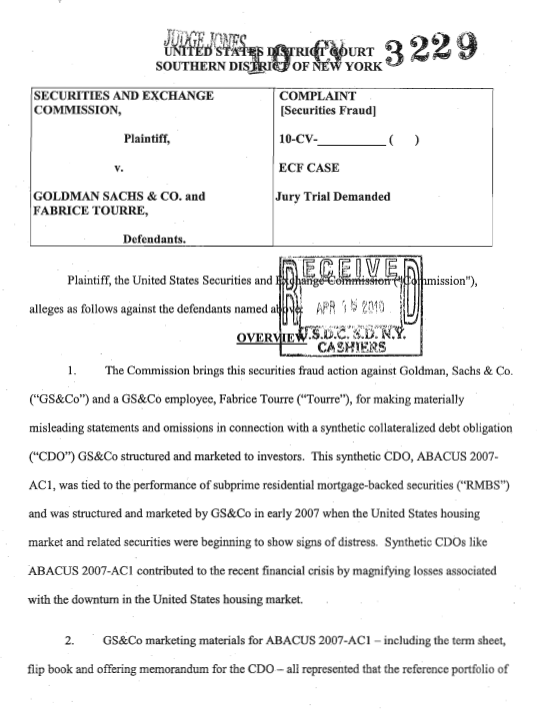 I. The Commission brings this securities fraud action against Goldman, Sachs & Co. (“GS&Co”) and a GS&C6 employee, Fabrice Tourre (“Tourre”), for making materially misleading statements and omissions in connection with a synthetic collateralized debt obligation (“CDO”) GS&Co structured and marketed to investors. This synthetic CDO, ABACUS 2007ACI, was tied to the performance of subprime residential mortgage-backed securities (“RMBS”) and was structured and marketed by GS&Co in early 2007 when the United States housing market and related securities were beginning to show signs of distress. Synthetic CDOs like ABACUS 2007-ACI contributed to the recent financial crisis by magnifying losses associated with the downturn in the United States housing market.

2. GS&Co marketing materials for ABACUS 2007-ACI- including the term sheet, flip book and offering memorandum for the CDO-all represented that the reference portfolio of RMBS underlying the CDO was selected by ACA Management LLC (“ACA”), a third-party with experience analyzing credit risk in RMBS. Undisclosed in the marketing materials and unbeknownst to investors, a large hedge fund, Paulson & Co. Inc. (“Paulson”), with economic interests directly adverse to investors in the ABACUS 2007-ACI CDO, played a significant role in the portfolio selection process. After participating in the selection of the reference portfolio, Paulson effectively shorted the RMBS portfolio it helped select by entering into credit default swaps (“CDS”) with GS&Co to buy protection on specific layers ofthe ABACUS 2007-ACI capital structure. Given its financial short interest, Paulson had an economic incentive to choose RMBS that it expected to experience credit events in the near future~ GS&Co did not disclose Paulson’s adverse economic interests or its role in the portfolio selection process in the term sheet, flip book, offering memorandum or other marketing materials provided to investors.

4. Tourre was principally responsible for ABACUS 2007-ACI. Tourre devised the transaction, prepared the marketing materials and communicated directly with investors. Tourre knew ofPaulson’s undisclosed short interest and its role in the collateral selection process. Tourre also misled ACA into believing that Paulson invested approximately $200 million in the equity of ABACUS 2007-ACI (a long position) and, accordingly, that Paulson’s interests in the collateral section process were aligned with ACA’s when in reality Paulson’s interests were .sharply conflicting.

5. The deal closed on April 26, 2007. Paulson paid GS&Co approximately $15 million for structuring and marketing ABACUS 2007-ACl. By October 24,2007,83% of the RMBS in the ABACUS 2007-AC1 portfolio had been downgraded and 17% were on negative watch. By January 29,2008,99% of the portfolio had been downgraded. As a result, investors in the ABACUS 2007-AC1 CDO lost over $1 billion. Paulson’s opposite CDS positions yielded a profit of approximately $1 billion for Paulson.

6. By engaging in the misconduct described herein, GS&Co and Tourre directly or indirectly engaged in transactions, acts, practices and a course of business that violated Section 17(a) ofthe Securities Act of 1933, 15 U.S.C. §77q(a) (“the Securities Act”), Section lOeb) of the Securities Exchange Act of 1934, 15 U.S.C. §78j(b)(“the Exchange Act”) and Exchange Act Rule 10b-5, 17 C.P.R. §240.10b-5. The Commission seeks injunctive relief, disgorgement of profits, prejudgment interest, civilpenalties and other appropriate and necessary equitable relief from both defendants.

25. In late 2006 and early 2007, Paulson performed an analysis of recent-vintage Triple B RMBS and identified over 100 bonds it expected to experience credit events in the near future. Paulson’s selection criteria favored RMBS that included a high percentage of adjustable rate mortgages, relatively low borrower FICO scores, and a high concentration of mortgages in states like Arizona, California, Florida and Nevada that had recently experienced high rates of home price appreciation. Paulson informed GS&Co that it wanted the reference portfolio for the contemplated transaction to include the RMBS it identified or bonds with similar characteristics.

26. On January 8, 2007, Tourre attended a meeting with representatives from Paulson and ACA at Paulson’s offices in New York City to discuss the proposed transaction.

27. On January 9,2007, GS&Co sent an email to ACA with the subject line, “Paulson Portfolio.” Attached to the email was a list of 1232006 RMBS rated Baa2. On January 9,2007, ACA performed an “overlap analysis” and determined that it previously had purchased 62 of the 123 RMBS on Paulson’s list at the same or lower ratings.

28. On January 9,2007, GS&Co informed ACA that Toune was “very excited by the initial portfolio feedback.”

F. GS&CO MISLED INVESTORS BY REPRESENTING THAT ACA
SELECTED THE PORTFOLIO WITHOUT DISCLOSING PAULSON’S
SIGNIFICANT ROLE IN DETERMINING THE PORTFOLIO AND ITS
ADVERSEECONOMIC INTERESTS

36. GS&Co’s marketing materials for ABACUS 2007-ACI were false and misleading because they represented that ACA selected the reference portfolio while omitting any mention that Paulson, a party with economic interests adverse to CDO investors, played a significant role in the selection of the reference portfolio.

37. For example, a 9-page tenn sheet for ABACUS 2007-ACI finalized by GS&Co on or about February 26,2007, described ACA as the “Portfolio Selection Agent” and stated in bold print at the top of the first page that the reference portfolio of RMBS had been “selected by ACA.” This document contained no mention of Paulson, its economic interests in the transaction, or its role in selecting the reference portfolio.

38. Similarly, a 65-page flip book for ABACUS 2007-ACI finalized by GS&Co on or about February 26,2007 represented on its cover page that the reference portfolio of RMBS had been “Selected by ACA Management, LLC.” The flip book included a 28-page overview of ACA describing its business strategy, senior management team, investment philosophy, expertise, track record and credit selection process, together with a 7-page section of biographical information on ACA officers and employees. Investors were assured that the party selecting the portfolio had an “alignment of economic interest” with investors. This document contained no mention ofPaulson, its economic interests in the transaction, or its role in selecting the reference portfolio.