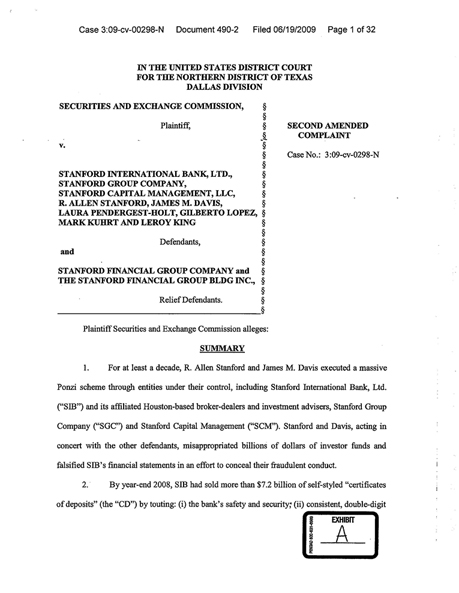 1. For at least a decade, R. Allen Stanford and James M. Davis executed a massive Ponzi scheme through entities under their control, including Stanford International Bank, Ltd. (“SIB”) and its affiliated Houston-based broker-dealers and investment advisers, Stanford Group Company (“SGC”) and Stanford Capital Management (“SCM”). Stanford and Davis, acting in concert with the other defendants, misappropriated billions of dollars of investor funds and falsified SIB’s financial statements in an effort to conceal their fraudulent conduct.

2. By year-end 2008, SIB had sold more than $7.2 billion of self-styled “certificates of deposits” (the “CD”) by touting: (i) the bank’s safety and security,’ (ii) consistent, double-digit returns on the bank’s investment portfolio; and (iii) high return rates on the CD that greatly exceeded those offered by commercial banks in the United States.

3. Contrary to SIB’s public statements, Stanford and Davis, by February 2009, had misappropriated billions of dollars of investor money and “invested” an undetermined amount of investor funds in speculative, unprofitable private businesses controlled by Stanford.

5. Laura Pendergest-Holt, the chief investment officer of Stanford Financial Group (“SFG”) and a member of SIB’s investment committee, facilitated the fraudulent scheme by misrepresenting to investors that she managed SIB’s multi-billion investment portfolio of assets and supervised a sizeable team of analysts to monitor the portfolio. 6. Leroy King, the administrator and chief executive officer of Antigua’s Financial Services Regulatory Commission (the “FSRC”), facilitated the Ponzi scheme by ensuring that
the FSRC “looked the other way” and conducted sham audits and examinations of SIB’s books and records. In exchange for bribes paid to him over a period of several years, King made sure that the FSRC did not examine SIB’s investment portfolio. King also provided Stanford with access to the FSRC’s confidential regulatory files, including requests by the Commission for assistance in investigating SIB as a possible Ponzi scheme. King further obstructed the Commission’s investigation by allowing Stanford to dictate the substance, and even content, of the FSRC’s responses to the Commission that relayed false assurances that there was no cause for concern as to SIB and by withholding information requested by the Commission that would have revealed Stanford’s fraud.

7. In addition to sales of the CD, SGC and SCM advisers, since 2004, have sold more than $1 billion of a proprietary mutual fund wrap program, called Stanford Allocation Strategy (“SAS”), using materially false and misleading historical performance data. The false data enabled SGC/SCM to grow the SAS program from less than $ 10 million in 2004 to over $ 1.2 billion in 2009 and generate fees for SGC/SCM (and ultimately Stanford) in excess of $25 million. The fraudulent SAS performance results were also used to recruit registered financial advisers with significant books of business, who were then heavily incentivized to re-allocate their clients’ assets to SIB’s CD program.

41. These promissory notes were typically created after Davis had, at Stanford’s
direction, wired out billions dollars of SIB investor funds to Stanford or his designees. Stanford
used the money to, among other things, fund his “personal playground,” including more than
$400 million to fund personal real estate deals {e.g., The Sticky Wicket Restaurant) and more
than $36 million to subsidize Stanford 20/20, an annual cricket tournament boasting a $20
million purse.
42. Lopez and Kuhrt (in addition to Stanford and Davis) were well aware of the more
than $1.6 billion in “loans” to Stanford, tracking many of the transfers in a spreadsheet entitled
“Shareholder Funding, Assumption of Debt and Notes Payable.” Stanford made few, if any,

39. Contrary to SIB’s representations regarding the liquidity and safety of its portfolio, investors’ funds were not invested in a “well-diversified portfolio of highly marketable securities.” Instead, Stanford misappropriated a significant portion of the bank’s investment portfolio. And SIB internal records reflect that more than half of the bank’s investment portfolio was comprised of undisclosed “Private Equity Real Estate.”

70. Neither Pendergest-Holt nor the SIO disclosed that the bank’s Tier 3 assets were managed and/or monitored exclusively by Stanford and Davis. Likewise, they did not disclose that Stanford and Davis surrounded themselves with a close-knit circle of family, friends and confidants, thereby eliminating any independent oversight of SIB’s assets.

71. Neither Pendergest-Holt nor the SIO disclosed to investors that the “global network” of money managers and the team of analysts did not manage any of SIB’s Tier 3 investments and, in reality, only monitored approximately 10% of SIB’s portfolio. In fact, Pendergest-Holt trained the SIO “not to divulge too much” about the oversight of SIB’s portfolio because that information “wouldn’t leave an investor with a lot of confidence.” Likewise, Davis instructed the SIO to “steer” potential CD investors away from information about SIB’s portfolio.

79. In the December 2008 Monthly Report, SIB told CD investors that the bank “had no direct or indirect exposure to any of [Bernard] Madoff s investments.”

80. Contrary to this statement, Stanford, Davis and Pendergest-Holt knew, prior to the release of the Monthly Report, that SIB had exposure to losses from investments with Madoff.

81. On December 12, 2008, and again on December 18, 2008, Pendergest-Holt received e-mails from Meridian Capital Partners, a hedge fund with which SIB had invested, detailing SIB’s exposure to Madoff-related losses.

83. Stanford, Davis and Pendergest-Holt never corrected this misrepresentation in the December 2008 monthly report.
Leroy King’s Role in the Fraudulent Scheme

84. Leroy King was the administrator and chief executive officer of the FSRC, which is charged with the regulation and supervision of all offshore banks licensed in Antigua, including SIB.

85. From at least February 2005, and continuing over a multi-year period, Stanford paid to King thousands of dollars in bribes, using money transferred from SIB to a Stanford controlled account at the Bank of Antigua, an onshore Antiguan bank owned and controlled by Stanford. King caused certain of these bribes to be deposited into U.S. bank accounts.

86. In addition to the cash payments, Stanford gave to King and his wife significant non-cash benefits, including: (i) use of Stanford’s fleet of private jets to travel throughout the United States and the Caribbean; (ii) use of an SIB corporate car; and (iii) 2004 Super Bowl tickets for King and a companion. Stanford subsequently hired King’s Super Bowl companion as a human resources project manager in Houston.

87. In exchange for the bribes, King facilitated SIB’s fraud by obstructing the SEC’s investigation into SIB and abdicating the FSRC’s oversight responsibilities.

88. On June 21, 2005, King, in response to an inquiry from the SEC, represented to the SEC staff that the FSRC had examined SIB and based on its examinations had concluded that “any further investigation of ‘possible’ fraudulent activities of [SIB] was unwarranted.” King continued by saying that “it is the opinion of the FSRC that [SIB] has conducted its banking business to date in a manner the FSRC considers to be fully compliant.” King had no basis for these representations. In exchange for the bribes from Stanford, King promised that the FSRC would not audit SIB’s investment portfolio. In fact, on at least one occasion in or about May 2003, King removed from an examination of an SIB affiliate an inquisitive FSRC employee that “got too close to the fire.”

90. On October 10, 2006, King did as Stanford instructed, sending a letter to the Commission’s staff that tracked the response dictated by Stanford, Davis and SFG’s general counsel. King’s letter falsely stated: “We wish to assure the SEC that the FSRC’s most recent onsite examination conducted just five months ago confirmed [SIB’s] compliance with all areas of depositor safety and solvency, as well as all other applicable laws and regulations. The FSRC has further confirmed through its continuous visits and supervision of [SIB] that there are no other issues or matters of concern with [SIB.]” In fact, King knew there was no basis for this
assurance.