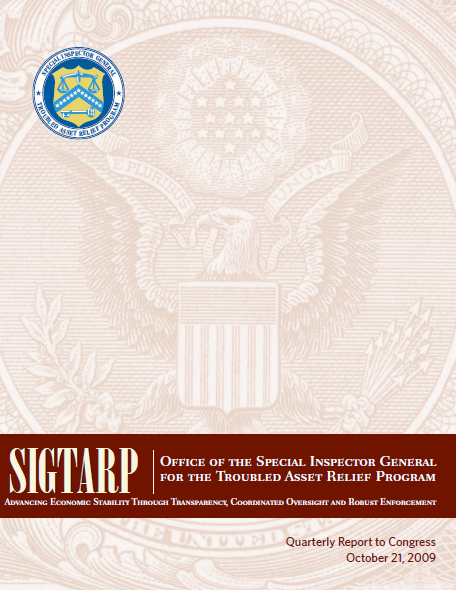 • Capital Purchase Program (“CPP”). Under CPP, TARP funds are used to purchase directly preferred stock or subordinated debentures in qualified financial institutions. Treasury created CPP to provide funds to “stabilize and strengthen the U.S. financial system by increasing the capital base of an array of healthy, viable institutions, enabling them [to] lend to consumers and business[es].” As of September 30, 2009, Treasury had invested $204.6 billion in institutions through CPP. This represents 94% of the maximum projected funding total of $218 billion under the program, of which $70.7 billion had been repaid as of
September 30, 2009.32 See the “Capital Purchase Program” discussion in this section for more detailed information.

• Capital Assistance Program (“CAP”). Similar to CPP, the goal of CAP is to “ensure the continued ability of U.S. financial institutions to lend to creditworthy borrowers in the face of a weaker than expected economic environment and larger than expected potential losses.” As of September 30, 2009, no transactions had occurred under this program. See the “Capital Assistance Program” part of this section for a more detailed discussion on this program.

• Systemically Significant Failing Institutions (“SSFI”) Program. Under the stated terms of the SSFI program, Treasury invests in systemically significant institutions to prevent their failure and the market disruption that would follow. As of September 30, 2009, Treasury, through SSFI, had made and is committed to make further investments in one institution — American International Group, Inc. (“AIG”). This support was provided through two transactions — $40 billion for the purchase of preferred stock from AIG to repay debt owed to the Federal Reserve and approximately $29.8 billion for an equity capital facility that AIG can draw on as needed. As of September 30, 2009, AIG had drawn down $3.2 billion in equity from the capital facility. See the “Systemically Significant Failing Institutions” portion of this section for a more detailed discussion of the AIG transactions.

• Asset Guarantee Program (“AGP”). Through AGP, Treasury’s stated goal is to use insurance-like protections to help stabilize at-risk financial institutions. AGP provides certain loss protections on a select pool of mortgage-related or similar assets held by participants whose portfolios of distressed or illiquid assets pose a risk to market confidence. Treasury, FDIC, and the Federal Reserve agreed to provide certain loss protections with respect to $301 billion in troubled assets held by Citigroup. Should Citigroup’s losses rise above $39.5 billion, Treasury is obligated to pay up to $5 billion in protection toward additional losses; as of September 30, 2009, Citigroup had not received any funds from AGP. A similar arrangement with Bank of America was announced on January 16, 2009; Bank of America, however, chose not to go through with the program. On September 21, 2009, Bank of America agreed to compensate the Government $425 million for the economic benefit it received while the market believed that the Government would be backing its assets. See the “Asset Guarantee Program” discussion in this section for more information on this program.

• Term Asset-Backed Securities Loan Facility (“TALF”). TALF was originally designed to increase the credit available for consumer and small-business loans through a Federal Reserve loan program backed by TARP funds. TALF provides non-recourse loans to investors secured by certain types of ABS including credit card loans, student loans, floorplan loans, insurance premium finance loans, loans guaranteed by the Small Business Administration (“SBA”), residential mortgage servicing advances, and commercial mortgage-backed securities (“CMBS”). According to Treasury, it will provide up to $80 billion42 of TARP funds to support this program (Treasury’s current TALF commitment is $20 billion, but should TALF exceed a total of $200 billion in loans extended by FRBNY, then Treasury will commit additional TARP funds). As of September 30, 2009, FRBNY had facilitated seven TALF subscriptions of non-mortgagerelated ABS, totaling approximately $47.3 billion of TALF borrowings.43 In addition, as of September 30, 2009, FRBNY had conducted four subscriptions for CMBS for which $4.2 billion in loans were issued.44 An overview of TALF, later in this section, provides more information on these activities.

• Public-Private Investment Program (“PPIP”). As originally announced, Treasury, in coordination with FDIC and the Federal Reserve, intended PPIP to improve the health of financial institutions and restart frozen credit markets through the purchase of legacy assets (e.g., legacy loans, CMBS, residential mortgage-backed securities (“RMBS”)).45 PPIP was intended to involve investments made through multiple Public-Private Investment Funds (“PPIFs”) in two subprograms — one to purchase real estate-related loans (“legacy loans”) and the other to purchase real estate-related securities (“legacy securities”) from financial institutions. FDIC launched a pilot Legacy Loans Program on July 31, 2009, with assets it had seized from bankrupt institutions. FDIC did not use TARP funds for this pilot program and is considering an expansion of this program without TARP funding. The Legacy Securities Program continues to develop, and on July 8, 2009, Treasury announced the selection of nine PPIF managers that will receive debt and equity financing of up to $30 billion in TARP funds during the initial capital-raising efforts for the PPIFs.47 Treasury has stated that PPIP, originally intended to involve up to $1 trillion in total funds, may involve up to $75 billion of TARP funds. See the “Public-Private Investment Program” discussion later in this section for details about the program structure and fund manager terms.

• Unlocking Credit for Small Businesses (“UCSB”). Under UCSB, Treasury announced that it will begin purchasing up to $15 billion in securities backed by SBA loans. As of September 30, 2009, no transactions had occurred under this program. See the discussion of “Small Business Administration Loan Support” in this section for more information on the program.

The stated objective of TARP’s automotive industry support programs is to “prevent a significant disruption of the American automotive industry, which would pose a systemic risk to financial market stability and have a negative effect on the economy of the United States.”

• Automotive Industry Financing Program (“AIFP”). Under this program, Treasury made emergency loans to Chrysler Holding LLC (“Chrysler”), Chrysler Financial Services Americas LLC (“Chrysler Financial”), and General Motors Corporation (“GM”). In addition to these investments, Treasury purchased senior preferred stock from GMAC LLC (“GMAC”). Treasury also provided financing to Chrysler and GM to assist in their restructuring process. As of September 30, 2009, Treasury had expended or committed $76.9 billion in AIFP investments, of which $1.5 billion had been repaid. Treasury received an 8% pro forma equity stake in Chrysler and a 61% equity stake in General Motors as partial repayment of TARP funds.52 See the discussion of “Automotive Industry Financing Program” later in this section for a detailed discussion on these companies.

• Auto Supplier Support Program (“ASSP”). The stated purpose of ASSP is to provide Government-backed financing to break the adverse credit cycle affecting the auto suppliers and the manufacturers by “providing suppliers with the confidence they need to continue shipping their parts and the support they need to help access loans to pay their employees and continue their operations.” Treasury’s original commitment under this program was $5 billion, but as of September 30, 2009, it had been reduced to $3.5 billion — $1.0 billion for Chrysler and $2.5 billion for GM. After emerging from bankruptcy, the new, non-bankrupt GM and Chrysler assumed the debts associated with ASSP. See the discussion of “Auto Supplier Support Program” in this section for more information.

• Auto Warranty Commitment Program (“AWCP”). The Auto Warranty Commitment Program was designed by the Administration with the intention of bolstering consumer confidence in automobile warranties on Chrysler- and GMbuilt vehicles. Under this program, Government-backed financing was to be provided for the warranties of cars sold during the Chrysler and GM restructuring periods. As reported in SIGTARP’s July Quarterly Report, Treasury funded $640.7 million toward this program — $280.1 million was made available to Chrysler and $360.6 million was made available to GM. As of September 30, 2009, the entire $640.7 million had been repaid with interest, and the program was terminated in July 2009.57 See the discussion of “Auto Warranty Commitment Program” in this section for more information.

The homeowner support program and its initiatives are aimed at assisting troubled homeowners and financial institutions holding the affected assets.

• Making Home Affordable (“MHA”) Program. According to Treasury, MHA is a foreclosure mitigation plan intended to “help bring relief to responsible homeowners struggling to make their mortgage payments while preventing neighborhoods and communities from suffering the negative spillover effects of foreclosure, such as lower housing prices, increased crime, and higher taxes.” Within MHA, there are three major initiatives, only one of which involves TARP funds — the Home Affordable Modification Program (“HAMP”). Under HAMP, Treasury announced that up to $50 billion of TARP funds could be expended for this $75 billion program.59 As of September 30, 2009, $27.1 billion in TARP funds had been allocated to the program. See the “Making Home Affordable” discussion in this section for more detailed information.

The following figures and tables provide a status summary of the implemented and announced TARP and TARP-related initiatives:

For a reporting of all purchase, obligations, expenditures, and revenues of TARP, see Appendix C: “Reporting Requirements.” 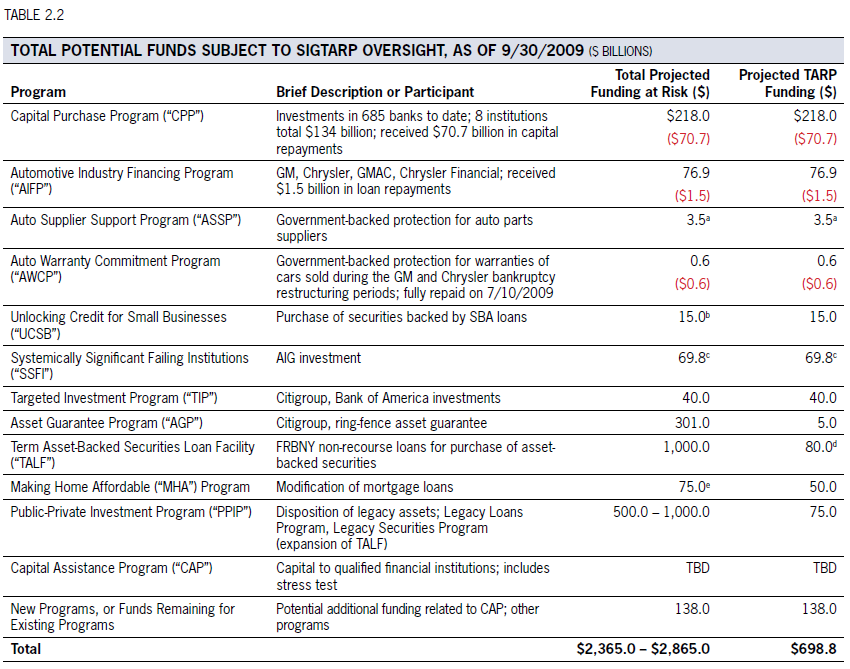