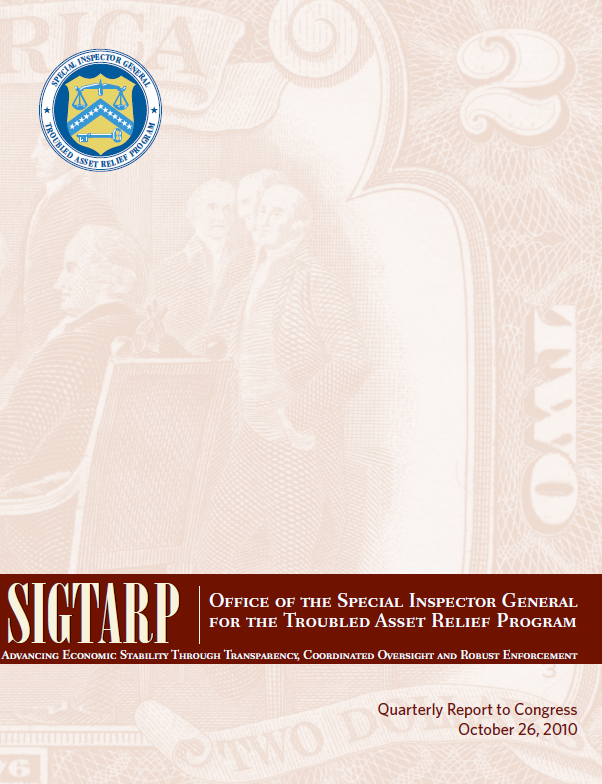 More than two years have passed since the Emergency Economic Stabilization Act of 2008 (“EESA”) authorized the creation of the Troubled Asset Relief Program
(“TARP”). On October 3, 2010, Treasury’s authority to initiate new TARP investments expired, marking a significant milestone in TARP’s history but also leading to the widespread, but mistaken, belief that TARP is at or near its end. As of October 3, $178.4 billion in TARP funds were still outstanding, and although no new TARP obligations can be made, money already obligated to existing programs may still be expended. Indeed, with more than $80 billion still obligated and available for spending, it is likely that far more TARP funds will be expended after October 3, 2010, than in the year since last October when U.S. Treasury Secretary Timothy Geithner (“Treasury Secretary”) extended TARP’s authority by one year. In short, it is still far too early to write TARP’s obituary.

At the same time, TARP’s two-year anniversary is a fitting time for an interim
assessment. To what extent has TARP met the goals set for it by the U.S.
Department of the Treasury (“Treasury”) in announcing TARP programs and
by Congress in providing Treasury authorization to expend TARP funds —
avoiding financial collapse, “increas[ing] lending,” “maximiz[ing] overall returns to
the taxpayers,” “provid[ing] public accountability,” “preserv[ing] homeownership,”
and “promot[ing] jobs and economic growth” — and at what cost? In answering
these questions, it is instructive to compare TARP’s impact on Wall Street with its
impact on Main Street. By fulfilling the goal of avoiding a financial collapse, there
is no question that the dramatic steps taken by Treasury and other Federal agencies
through TARP and related programs were a success for Wall Street. Those actions
have helped garner a swift and striking turnaround, accompanied by a return to
profitability and seemingly ever-increasing executive bonuses. For large Wall Street
banks, credit is cheap and plentiful and the stock market has made a tremendous
rebound. Main Street, too, has reaped a significant benefit from the prevention of
a complete collapse of the financial industry and domestic automobile manufacturers,
the ripple effects such collapses would have caused, and increased stock
market prices. Main Street has largely suffered alone, however, in those areas in
which TARP has fallen short of its other goals.

On September 30, 2010, AIG announced that it had entered into an agreement
in principle with Treasury, the Federal Reserve Bank of New York (“FRBNY”), and
the AIG Credit Facility Trust (“AIG Trust”), the entity in which FRBNY placed
oversight of the 79.8% ownership interest it received in AIG, to recapitalize AIG in
order to facilitate repayment of the company’s obligations to American taxpayers.
Treasury’s TARP “Two Year Retrospective” (“Retrospective”), published earlier this
month, describes the agreement as “put[ting] taxpayers in a considerably stronger
position to recoup their investment in the company.” Indeed, Treasury suggests,
using current market prices of AIG stock and its projected holdings after the
recapitalization, that taxpayers might ultimately profit on the Government’s overall
support of AIG, consisting of a $5 billion loss on the TARP investment and a $22
billion gain from the sale of the ownership interest in AIG received by FRBNY
outside of TARP.

Although the recapitalization plan does create the possibility of an accelerated
Government exit from its ownership interest in AIG, Treasury’s projections
are subject to a degree of uncertainty. First, as described in more detail in Section
2: “TARP Overview,” the recapitalization plan is enormously complex and subject
to a significant number of conditions that may or may not be fulfilled. Second,
Treasury’s loss estimate is based on multiplying the share price of AIG’s common
stock by the number of shares Treasury expects to hold at the end of the recapitalization
process. This calculation does not account for the volatility in AIG’s stock
price, which may result in losses or gains that are either greater or less than the
projected amounts. The plan also includes providing AIG up to an additional
$22 billion in TARP funds under its existing equity facility and an exchange
of $49.1 billion of TARP preferred shares for approximately 1.1 billion more
risky common shares, which will result in a 12% incremental increase in the
Government’s overall common ownership of AIG (from the 79.8% received by
FRBNY in September 2008 to a post-recapitalization interest of 92%).

Treasury’s most recent estimate of a $5 billion loss on its AIG investment also
represents a dramatic shift from the $45 billion loss that Treasury had projected in
its AIG investment just six months earlier. While AIG’s fortunes may have indeed
improved during the course of those six months, there is a serious question over
how much of this decrease comes from a change in Treasury’s methodology for
calculating the loss as opposed to AIG’s improved prospects. All of Treasury’s prior
loss estimates for AIG under TARP, including the March 31, 2010, estimate of
$45.2 billion, were conducted in accordance with its published “Methodology
to Calculate Estimated TARP Costs” (“Methodology”), which describes how
Treasury values all of its investments, including its preferred shares of stock in
AIG. Consistent with that document, Treasury’s previous loss estimate for AIG, as
with its estimates of other TARP investments in preferred shares of stock, accounts
for a broad range of factors that might affect the value of Treasury’s holdings. The
Retrospective, however, abandoned the published Methodology, instead estimating
a $5 billion loss based solely on the recent market closing price of AIG’s common
stock, on the assumption that the recapitalization plan will go exactly as planned
and result in Treasury receiving approximately 1.1 billion common shares of AIG
stock in return for its current preferred interests. While Treasury did describe
its new methodology in the Retrospective, it did not disclose that this methodology
differed from that used previously and from what is set forth in its published
Methodology. The Retrospective also failed to disclose that its common-stock-based
valuation would not and could not be used in Treasury’s fiscal year 2010 TARP
financial statements, which will be published in November and which will continue
to use the auditor-approved methodology that has characterized every other
Treasury estimate of loss on its AIG investment.

While SIGTARP offers no opinion on the appropriateness or accuracy of the
valuation contained in the Retrospective, we believe that the Retrospective fails to
meet basic transparency standards by failing to disclose: (1) that the new lower estimate
followed a change in the methodology that Treasury previously used to calculate
expected losses on its AIG investment; and (2) that Treasury would be required
by its auditors to use the older, and presumably less favorable, methodology in the
official audited financial statements. To avoid potential confusion, Treasury should
have disclosed that it had changed its valuation methodology and should have
published a side-by-side comparison of its new numbers with what the projected
losses would be under the auditor-approved methodology that Treasury had used
previously and will use in the future. This conduct has left Treasury vulnerable to
charges that it has manipulated its methodology for calculating losses to present
two different numbers depending on its audience: one designed for release in early
October as part of a multifaceted publicity campaign touting the positive aspects
of TARP and emphasizing the reduction in anticipated losses, and one, audited by the Government Accountability Office (“GAO”), for release in November as part of
a larger audited financial statement. Here again, Treasury’s unfortunate insensitivity
to the values of transparency has led it to engage in conduct that risks further
damaging public trust in Government.

Compounding this potential harm was the comparison made during the rollout
of the Retrospective of the lowered projected losses with older estimates. This
leaves Treasury vulnerable to additional criticism for making what some might
characterize as an apples-to-oranges comparison, disclosing the change in the relative
amounts of losses, but not the accompanying change in methodology used to
calculate those losses.

As a result of these concerns and with the hope that Treasury would correct this
problem, SIGTARP sent a letter to the Treasury Secretary, dated October 13, 2010,
recommending that Treasury prominently publish an explanation of its change in
methodology along with an updated side-by-side comparison of the loss projection
under the prior methodology. A copy of the letter, along with Treasury’s response, is
contained in Appendix H: “Correspondence.”

In its October 19, 2010, letter response, Treasury rejected SIGTARP’s call for
greater transparency, instead making the seemingly counterfactual claim that that
“there has not been any change in our established valuation methodology,” because
its published Methodology contemplates that “investments in common stock are
valued at the market price of that common stock” and that the Retrospective valuation
“applies our established methodology.” This explanation is puzzling. While the
Methodology does contemplate the “use of market prices” for common stock and
other securities, it does so only “for TARP investments that are standard financial
instruments that trade in public markets or are closely related to tradable securities.”
According to the Methodology, Treasury, for its earlier valuation of AIG, made
the determination that “no comparable preferred shares exist,” and therefore used
a different and more complex methodology. There is nothing in the Methodology
that suggests that calculations on the valuation of preferred shares will be based
on a planned conversion to common shares, which is presumably why Treasury’s
auditors will continue to require Treasury to use the more complex methodology in
its audited financial statements. Indeed, Treasury has confirmed to SIGTARP that
it did not apply the methodology that is applied to AIG in the Retrospective to similarly
situated banks in which Treasury holds preferred shares that are under similar
recapitalization agreements that contemplate a future conversion of Treasury’s
stake from preferred to common. That Treasury continued to value those shares using
the standard preferred share valuation further undermines Treasury’s assertion
that there was no change in its treatment of AIG in the Retrospective. In any event,
SIGTARP finds Treasury’s contention that there was no change in its methodology
to be unconvincing, and stands by this recommendation. 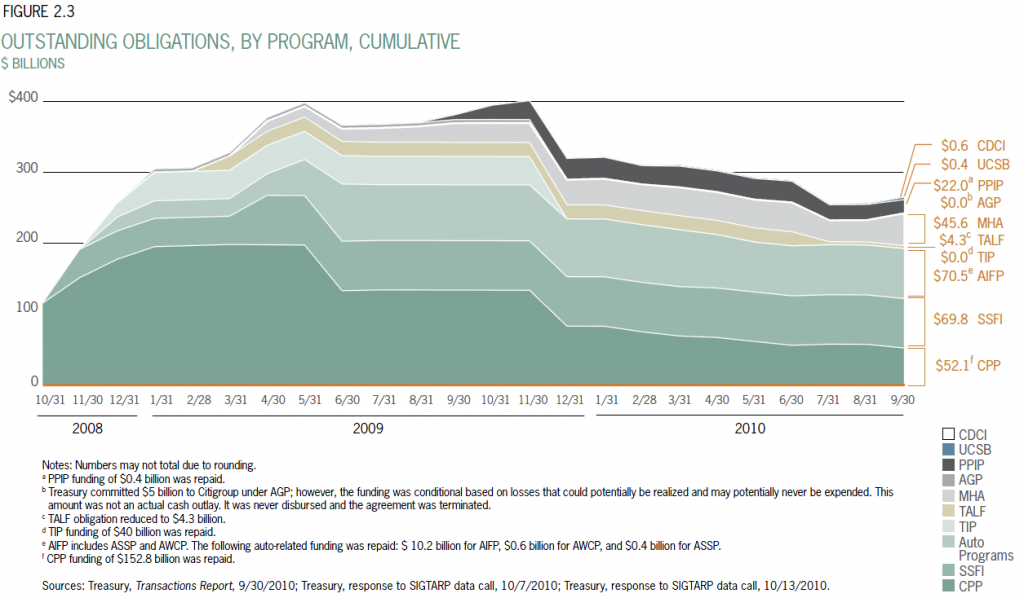