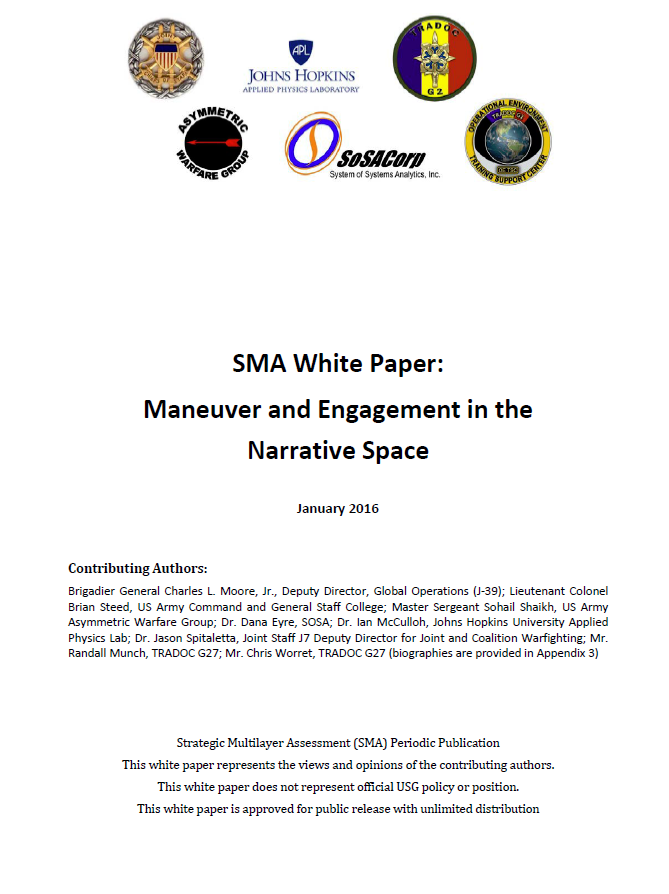 SMA White Paper: Maneuver and Engagement in the Narrative Space

Warfare is ultimately a human endeavor. When planning to deal with any adversary or potential adversary, it is essential to understand who they are, how they function, their strengths and vulnerabilities, and why they oppose us. Events over the course of the last year and a half highlight the importance of those factors as they relate to the Islamic State of Iraq and the Levant (ISIL). One of ISIL’s obvious strengths is their ability to propagate tailored narratives that resonate with target audiences. If the US and our allies are to counter ISIL effectively, we must attack this center of gravity. A recent white paper endorsed by General Votel, Commanding General of US Special Operations Command (USSOCOM), states,

Thousands of airstrikes helped to check their [ISIL’s] rapid expansion, but the decisive effort against them will require discrediting their narrative and connecting the people to legitimate governing structures – areas where Department of Defense should not have primacy.

Discrediting ISIL’s narrative will require a long-term effort by a team of experts. It will require: (1) developing an in-depth understanding of ISIL’s narratives and why they resonate with target audiences, (2) building a whole of government team that can effectively counter and replace ISIL narratives with a strategic communications plan that directly supports our desired end states, (3) globally employing counter-narratives and replacement narratives, (5) gathering and collecting data to assess the effects of narratives (theirs and ours), and (6) continually refining the content and employment of our narratives based on an assessment of their effectiveness.

An effective, whole of government, Strategic Communications plan requires close coordination and synchronization across all lines of effort. The US Department of State should lead the US effort with support from the other Departments/Agencies on behalf of the US government. To be successful, our approach must also include our friends and allies. Specific multinational partners can help us understand why some ISIL narratives resonate and how they can be countered and/or replaced. In fact, truly effective influence operations require a combination of art and science. The best approach will most likely require contributions from neuroscientists, sociologists, psychological operations specialists, intelligence analysts, civil affairs planners, law enforcement professionals, and others. The melding of these diverse inputs into a comprehensive strategy demands skill, patience, close coordination and an inherent understanding of the ultimate end states. Ultimately, discrediting ISIL’s narrative will most likely take years and will require significant resources. However, the execution of our strategic communication game plan, from initial analysis to our measure of effectiveness, must be conducted with the speed and agility necessary to not only replace ISIL’s narrative but to drive and shape their perceptions and subsequent actions. Simply put, to achieve victory we must outmaneuver and outpace ISIL in the narrative space. Currently, the opposite is occurring and is a trend that must be reversed.