Despite a two page warning at the beginning of the document, this “Aviation Emergency Amendment” was openly posted to the website of a Malaysian air cargo company. It concerns cargo screening procedures implemented by the TSA in the wake of the attempted “printer bombs” sent in October 2010. 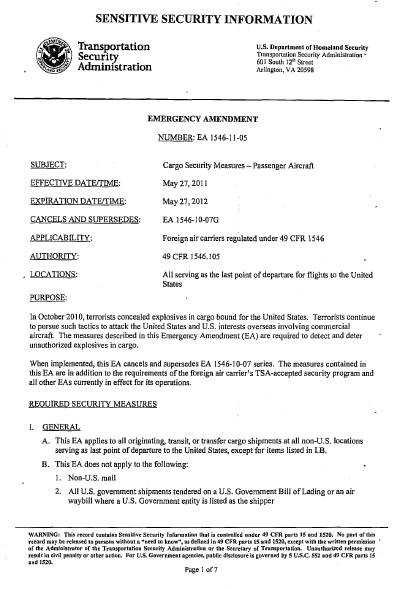 When implemented, this EA cancels and supersedes EA 1546-10-07 series. The measures contained in this EA are in addition to the requirements of the foreign air carrier’s TSA-accepted security program and all other EAs currently in effect for its operations.

A. This EA applies to all originating, transit, or transfer cargo shipments at all non-U.S. locations serving as last point of departure to the United States, except for items listed in I.B.

B. This EA does not apply to the following:

4. Live animals as defined in the MSP

5. Hazardous material as defined in the MSP

C. Cargo originating in, transferring from, or transiting through any point in the countries listed in Attachment I must not be transported on any passenger aircraft.

D. A “courier bag” is a non-rigid receptacle or container that is used to consolidate multiple shipments under a single master air waybill (MA WB).

E. Business Relationship – An association between persons (“persons” includes individuals and entities) that includes the establishment of an account with physical and billing addresses AND a payment or credit history documented through invoices or billing records OR a documented history of sales that may include any contacts or activities OR other documented correspondence or business records.

A. Screen each piece of cargo separately for unauthorized explosives, incendiaries, and other destructive substances using either X-ray or Advanced Technology X-ray (AT X-ray) equipment that is on the TSA Air Cargo Approved Screening Technology List (ACSTL) or is approved in writing by TSA through the foreign air carrier’s International Industry Representative (IIR). Cargo in courier bags may be screened in accordance with Section III.D.

B. If the equipment described in Section I1i.A. is unavailable or inoperable or the cargo is too large for the equipment, screen each piece of cargo in accordance with Section III.C.I., 2., and 3.

C. If any piece of screened cargo appears to contain both an electronic device or item and an organic mass or inorganic oxidizer (as identified by referencing the standard colors provided by the manufacturer of the equipment):

1. Screen the cargo using one of the following methods:

a. Conduct an internal Explosives Trace Detection (ETD) search by opening the piece and swiping all electronic items, any suspected organic masses or inorganic oxidizers, and all items the size of a 12-ounce (354-milliliter) soft drink can and larger. Swipe four sides and the top and bottom of each item. For the items that do not have four sides, samples are to be taken in four areas that would most likely have been touched during the packing. process. The ETD equipment must be on the TSA ACSTL or be approved in writing by TSA through the foreign air carrier’s I1R.

b. Screen the piece with TSA-approved explosives detection canine, certified by the national authority of a country listed in Attachment II.

2. Review the shipment documentation to determine if the transportation cost of the shipment far exceeds the value of the commodity and resolve any discrepancies by contacting the consignee listed on the house air waybill to verify their knowledge of the shipment and its contents. Maintain a record of the contact with the consignee for 90 calendar days after acceptance.

3. If cargo cannot be screened as described in Section III.C.I. and 2., it must not be transported onboard any aircraft.

D. Cargo in a courier bag weighing 35 kilograms (77 pounds) or less may be screened without opening the bag in accordance with the following requirements:

1. The X-ray or AT X-ray unit used must have a minimum power rating of 60 kilovolts (kv), and either be on the TSA ACSTL or be approved in writing by TSA through the foreign air carrier’s IIR.

2. Courier bags must go through the X-ray or AT X-ray one at a time.

3. Courier bags containing commodities that are too dense to render a clear X-ray or AT X-ray image must be opened and the contents screened one piece at a time.

5. If any piece in the courier bag appears to contain both an electronic device or item and organic mass or inorganic oxidizers, apply the measures in Section III.C.

6. If the X-ray or AT X-ray image is unclear, shielded, or opaque or contains any unidentifiable anomalies, remove each piece from the bag and screen each piece.

E. If unauthorized explosives, incendiaries, or other destructive substances or items are discovered:

1. The cargo must not be loaded or transported onboard any aircraft and must be isolated in a secure location, controlled, and physically guarded to prevent unauthorized access.

2. Immediately notify the Air Carrier Management Representative (ACMR), host government authorities, and the Transportation Security Operations Center at +1-866-655-7023 (for callers from the 50 United States, Puerto Rico, and Canada) or + 1-703-563-3240 (for all other callers).

3. Inform entities identified in Section IILE.2. of any additional cargo on the premises that was tendered or transferred with the suspect cargo.