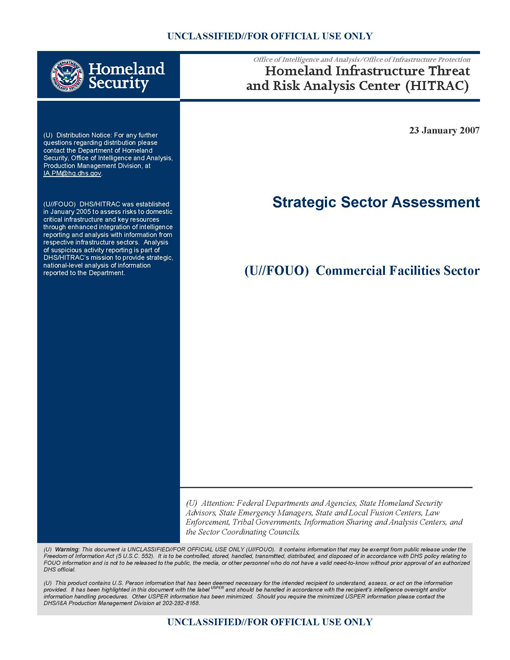 (U//FOUO) This Strategic Sector Assessment is one in a series that provides an overall assessment of the potential terrorist threats to critical infrastructure and key resources, and provides decision makers with the broad, analytically-based threat information necessary to inform investment priorities and program design. It also provides the overarching analytic foundation for incident reports and threat warnings produced by DHS and other federal partners. This assessment was prepared with input from federal infrastructure partners and the private sector.

(U//FOUO) This assessment describes DHS’ knowledge and provides analysis of current terrorist threats to commercial facilities sector (CFS) assets within the United States. It also describes known terrorist goals and motives, their potential application to the CFS, vulnerabilities associated with sector facilities and assets, and the potential consequences of an attack.

(U//FOUO) Al-Qa‘ida continues to pose the greatest terrorist threat to the CFS. Al-Qa‘ida desires to strike the United States again, and an attack against CFS assets could meet its targeting strategy of mass casualties, economic damage, and psychological impact.

(U//FOUO) Sunni extremists and homegrown radicals also pose a threat to this sector. Homegrown radicalization is an emerging, dynamic phenomenon that may spur individuals to
attack CFS assets.

(U//FOUO) Terrorist casing reports uncovered in July 2004 on financial institutions in the New Jersey–New York area and in Washington, D.C. provide the greatest insight to date into al-Qa‘ida’s targeting strategy against high-profile financial institutions and the commercial facilities that house them, as well as the surveillance techniques and methods of operations.

(U//FOUO) The CFS is marked by its vast size and diversity of subsector assets. Several characteristics, such as open public access and proximity to the assets of other sectors that also are potential targets, challenge the development and implementation of protective measures for the sector.

(U//FOUO) Al-Qa‘ida continues to pose the greatest terrorist threat to the CFS. DHS has specific and credible reporting from multiple sources indicating al-Qa‘ida’s historical interest in attacking specific elements of the CFS. DHS is not aware of any specific imminent threat to critical infrastructure in the sector, but an attack against a sector asset likely would meet al-Qa‘ida’s strategic targeting criteria, which are to inflict American casualties, cause psychological damage to the U.S. population by attacking symbols of U.S. culture or symbolic value, and damage the national economy.

— (U//FOUO) There are numerous examples of attacks overseas by al-Qa‘ida and al-Qa‘ida affiliates against commercial facilities such as resorts in Egypt, clubs and hotels in Indonesia, and shopping centers and hotels in Jordan.

(U//FOUO) DHS has no information to suggest that Islamic groups present in the United States such as HAMAS or Hizballah are currently targeting the sector. These groups, however, like al-Qa‘ida, may find commercial facilities attractive targets. The presence of established extremist networks could facilitate operational activity against critical infrastructure.

(U//FOUO) Counterterrorist operations have forced al-Qa‘ida to decentralize since the 11 September 2001 attacks. The network continues to plot attacks against U.S. coalition and allied targets, but also encourages other Islamic extremists and homegrown radicals to conduct attacks of their own. Indigenous radical groups and lone wolf individuals driven by al-Qa‘ida ideology and anger toward the United States now pose a greater threat to U.S. infrastructure— including commercial facilities—than in the past. They can be U.S. citizens or legal permanent residents who operate freely in U.S. society. Their familiarity with U.S. cultural and social norms often makes it more difficult for law enforcement to detect planning or operational activity.

(U//FOUO) Homegrown radicals usually have less access to terrorist training and funding than established groups such as al-Qa‘ida. As a result, attack planning generally is simpler, requires less coordination and skill, and has a shorter time frame. Thus, these attack plots may be more difficult to predict and interdict.

(U//FOUO) Attacks on CFS assets also are part of the goals of certain single-issue movements. In particular, the Animal Liberation Front (ALF) and the Earth Liberation Front (ELF)—both of
which are operationally active—have a history of targeting and attacking companies and facilities they deem are harmful to animals or the environment. The ALF has targeted companies that conduct product and medical testing using animals, and ELF advocates inflicting economic damage on those they believe to be profiting from destruction of the environment.

⎯ (U//FOUO) These groups are difficult for law enforcement and intelligence organizations to monitor because of their diffuse and tenuous membership. Their actions often are taken by lone wolves or small groups acting independently and in response to information provided by ALF and ELF rather than in response to direct leadership instructions.

⎯ (U//FOUO) These groups have had a measure of success in modifying the behavior of perceived offending businesses, and DHS expects them to continue their harassment tactics. They have targeted the homes, spouses, children, and business associates of personnel employed by commercial firms. In keeping with their ideology, these groups generally have targeted property rather than people, using nonviolent tactics such as Internet or telecommunications denial of service attacks, burglaries, and protests. During the past several years, however, the rhetoric of animal rights and environmental extremists has advocated increasingly violent actions, including arson and homicide.

(U//FOUO) Other domestic extremist groups such as white supremacist, neo-Nazi, and militia groups pose varying degrees of threat to security in the Homeland, but they have not shown interest specifically in the CFS. In the late 1990s an FBI Joint Terrorism Task Force arrested two antigovernment militia members in Sacramento, California for allegedly planning to blow up a storage facility that held approximately 24 million gallons of propane located about a mile from a residential subdivision.

(U//FOUO) Mass Casualties: In a March 2003 speech Usama Bin Ladin stated, “You know that seeking to kill Americans and Jews everywhere in the world is one of the greatest duties [of Muslims] and the good deed most preferred by Allah.” DHS analysis of foiled plots identifies al-Qa‘ida’s interest in employing attacks against commercial facilities such as commercial buildings, apartment buildings, or populated areas to inflict mass casualties. The large population densities present in commercial office complexes, apartment buildings, and retail facilities represent soft, target-rich locations that could enable al-Qa‘ida to achieve its mass casualty objectives.

(U//FOUO) Economic Damage: In 2003 Bin Ladin lauded the 11 September 2001 hijackers because “they struck at the very heart of the economy.” In an October 2004 statement, he quoted the finding of the Royal Institute of International Affairs to the effect that the total cost of the 11 September 2001 attacks—direct and indirect—to the United States was at least $500 billion, demonstrating al-Qa‘ida’s understanding and awareness of the economic impact of a successful terrorist attack against the United States.