The following document lists talking points prepared by the State Department in advance of Secretary of State John Kerry’s testimony before the Senate Foreign Relations Committee.  The talking points were posted on the State Department’s website and apparently linked to on some embassy websites, though the links have now appear to have been removed. 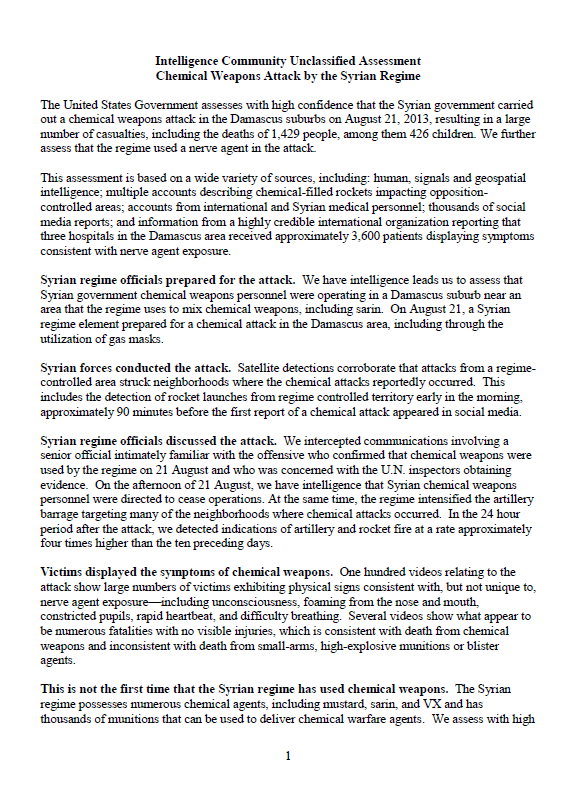 Syrian regime officials prepared for the attack. We have intelligence leads us to assess that Syrian government chemical weapons personnel were operating in a Damascus suburb near an area that the regime uses to mix chemical weapons, including sarin. On August 21, a Syrian regime element prepared for a chemical attack in the Damascus area, including through the utilization of gas masks.

Syrian forces conducted the attack. Satellite detections corroborate that attacks from a regime-controlled area struck neighborhoods where the chemical attacks reportedly occurred. This includes the detection of rocket launches from regime controlled territory early in the morning, approximately 90 minutes before the first report of a chemical attack appeared in social media.

Syrian regime officials discussed the attack. We intercepted communications involving a senior official intimately familiar with the offensive who confirmed that chemical weapons were used by the regime on 21 August and who was concerned with the U.N. inspectors obtaining evidence. On the afternoon of 21 August, we have intelligence that Syrian chemical weapons personnel were directed to cease operations. At the same time, the regime intensified the artillery barrage targeting many of the neighborhoods where chemical attacks occurred. In the 24 hour period after the attack, we detected indications of artillery and rocket fire at a rate approximately four times higher than the ten preceding days.

Victims displayed the symptoms of chemical weapons. One hundred videos relating to the attack show large numbers of victims exhibiting physical signs consistent with, but not unique to, nerve agent exposure—including unconsciousness, foaming from the nose and mouth, constricted pupils, rapid heartbeat, and difficulty breathing. Several videos show what appear to be numerous fatalities with no visible injuries, which is consistent with death from chemical weapons and inconsistent with death from small-arms, high-explosive munitions or blister agents.

It is highly unlikely that the opposition could have executed or fabricated the attack. We have seen no indication that the opposition has carried out a large-scale, coordinated rocket and artillery attack like the one that occurred on August 21. Our intelligence sources in the Damascus area did not detect any indications in the days prior to the attack that opposition affiliates were planning to use chemical weapons. Moreover, we assess the Syrian opposition does not have the capability to fabricate all of the videos, physical symptoms verified by medical personnel and NGOs, and other information associated with this chemical attack.

The use of chemical weapons in Syria threatens U.S. national security interests. Threatening to unravel the long-established international norm against the use of chemical weapons, for which there must be accountability and consequences; risking further violence and instability that threatens the region including close allies and partners like Israel, Turkey and Jordan; and increasing the risk that these weapons will be obtained by terrorist groups who might use them against the United States.

The international community is condemning this attack and calling for action. The Arab League declared that they have decided “to hold the Syrian regime fully responsible for this crime.” The Organization for Islamic Cooperation has said that the regime must be held “legally and morally accountable for this heinous crime.” NATO’s North Atlantic Council declared that “any use of such weapons is unacceptable and cannot go unanswered. Those responsible must be held accountable”.

This is not Iraq 2003. The response that the President is considering is limited, tailored, and focused on the issue of chemical weapons. The President has made clear that he is not considering an open-ended military intervention aimed at regime change, nor is he considering U.S. boots on the ground. This is not Iraq or Afghanistan (ground forces) or Libya (a sustained air campaign).