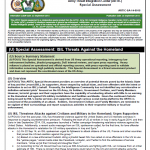 This ARTIC Special Assessment provides an overview of potential threats posed by the Islamic State of Iraq and the Levant (ISIL), its supporters, those swayed by radical Islam, and lone offenders with the intent or inclination to act on ISIL’s behalf. Presently, the Intelligence Community has not identified any corroborative or definitive extremist plots focused on the US Army, its Soldiers, Government Civilians, and Family Members. However, terrorist groups and their supporters have the capability of conducting attacks with little to no warning in the Homeland and against US military installations and facilities worldwide. Given the continued rhetoric being issued by ISIL’s media services and supporters through various social media platforms the ARTIC is concerned of the possibility of an attack. Soldiers, Government Civilians and Family Members are reminded to be vigilant of their surroundings and report suspicious activities to their respective military or local law enforcement.