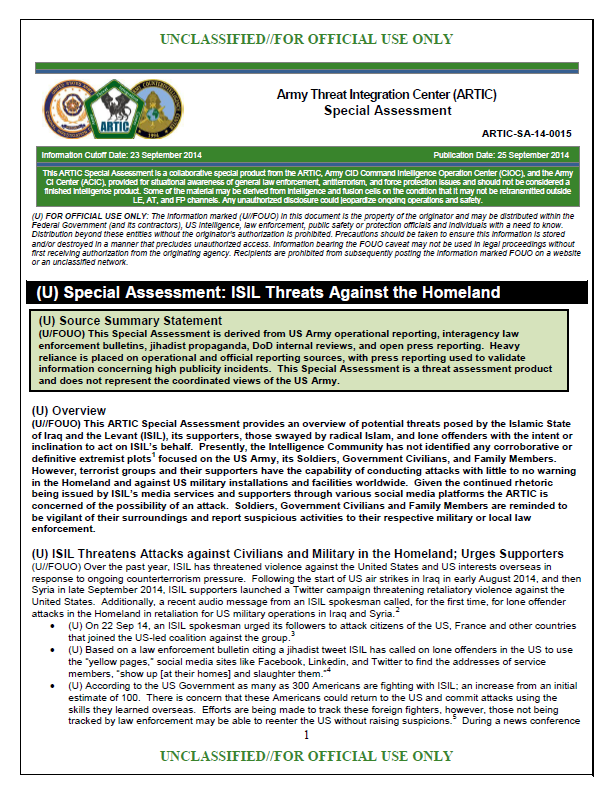 (U//FOUO) This ARTIC Special Assessment provides an overview of potential threats posed by the Islamic State of Iraq and the Levant (ISIL), its supporters, those swayed by radical Islam, and lone offenders with the intent or inclination to act on ISIL’s behalf. Presently, the Intelligence Community has not identified any corroborative or definitive extremist plots focused on the US Army, its Soldiers, Government Civilians, and Family Members. However, terrorist groups and their supporters have the capability of conducting attacks with little to no warning in the Homeland and against US military installations and facilities worldwide. Given the continued rhetoric being issued by ISIL’s media services and supporters through various social media platforms the ARTIC is concerned of the possibility of an attack. Soldiers, Government Civilians and Family Members are reminded to be vigilant of their surroundings and report suspicious activities to their respective military or local law enforcement.

(U) ISIL Threatens Attacks against Civilians and Military in the Homeland; Urges Supporters

(U//FOUO) Over the past year, ISIL has threatened violence against the United States and US interests overseas in response to ongoing counterterrorism pressure. Following the start of US air strikes in Iraq in early August 2014, and then Syria in late September 2014, ISIL supporters launched a Twitter campaign threatening retaliatory violence against the United States. Additionally, a recent audio message from an ISIL spokesman called, for the first time, for lone offender attacks in the Homeland in retaliation for US military operations in Iraq and Syria.

(U) On 22 Sep 14, an ISIL spokesman urged its followers to attack citizens of the US, France and other countries that joined the US-led coalition against the group.

(U) Based on a law enforcement bulletin citing a jihadist tweet ISIL has called on lone offenders in the US to use the “yellow pages,” social media sites like Facebook, Linkedin, and Twitter to find the addresses of service members, “show up [at their homes] and slaughter them.”

(U) According to the US Government as many as 300 Americans are fighting with ISIL; an increase from an initial estimate of 100. There is concern that these Americans could return to the US and commit attacks using the skills they learned overseas. Efforts are being made to track these foreign fighters, however, those not being tracked by law enforcement may be able to reenter the US without raising suspicions. During a news conference on 22 Sep 14, a senior Obama Administration official admitted that some Americans that fought alongside ISIL have returned to the US.

(U) Prior to the initiation of US airstrikes against ISIL in Iraq, Twitter posts were disseminated depicting ISIL supporters in front of the White House in Washington, DC and the Old Republic Building in Chicago. These tweets stated “We are in your state, We are in your cities, We are in your streets.” Another tweet added “we are here #america near our #target…sooooooooooooon.”

(U) Examples of Islamic Extremism outside the Middle East

(U) Generally, terrorist attacks committed against Westerners occur in countries where the terrorist has a greater presence and freedom of movement. In the past, attacks typically consisted of spectacular, massive bombings such as the bombing against transportation systems in Madrid (2004) and London (2005). Recently, more attacks are taking the form of small scale attacks with the use of knives, small caliber weapons, and bombs that can be made “in the kitchen of your mom.”

(U) Between 11 and 19 Mar 12, three French soldiers, as well as three Jewish children and a Jewish rabbi were killed by the same gunman in the towns of Toulouse and Montauban in southern France. The shooter, reportedly radicalized in prison, was said to have conducted the attacks in retaliation for France’s involvement in Afghanistan, its ruling on the wear of the burqa, and his anti-Semitic views. He was subsequently killed by a police sniper following a several hour standoff.

(U) On 22 May 13, two al Qa’ida inspired males targeted and attacked a British soldier with knives and a meat cleaver in Woolwich in the southeast area of London, United Kingdom. The British soldier presented a target of opportunity as he walked down the street. He was attacked in broad daylight within 400 meters of the Royal Artillery barracks. Prior to being confronted and detained by police one attacker was videotaped stating the attack was “an eye for an eye, a tooth for a tooth.”

(U) On 24 May 13, a French soldier was stabbed from behind in the neck while conducting a group patrol as part of a national protection program. At the time, the French Government did not want the country to jump to any conclusions given that this incident occurred with days of the Woolwich attack. The attacker in this incident was not caught and his motivations are unknown.

(U) On 15 Apr 13, two brothers detonated two pressure cooker bombs along the final stretch of the Boston Marathon killing three and wounding 250. A manhunt ensued resulting in the death of one suspect and the capture of the other. Resultant investigations determined that the brothers used detailed instructions cited in an online al Qa’ida in the Arabian Peninsula magazine titled Inspire.

(U) On 19 Sep 14, Australian federal and state police raided more than a dozen properties across Sydney and Brisbane foiling an ISIL plot to conduct beheadings in Australia. ISIL-affiliated members in Australia planned on videotaping the beheadings and sending the footage to ISIL media service in Iraq and Syria to disseminate via social media sites for propaganda purposes.