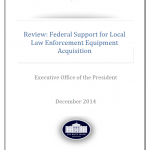 For decades, the federal government has provided billions of dollars in equipment to state and local law enforcement agencies (LEAs) through excess equipment transfers, asset forfeiture programs and federal grants. Particularly in the years since September 11, 2001, Congress and the Executive Branch have steadily increased spending and support for these programs, in light of legitimate concerns about the growing threat of terrorism, shrinking local budgets, and the relative ease with which some criminals are able to obtain high-powered weapons. These programs have significantly expanded over decades across multiple federal agencies without, at times, a commensurate growth in the infrastructure required to standardize procedures governing the flow of equipment from the federal government to LEAs. At the same time, training has not been institutionalized, specifically with respect to civil rights and civil liberties protections, or the safe use of equipment received through the federal government. Concerns over the lack of consistent protections have received renewed focus and attention in light of the recent unrest in Ferguson, Missouri. 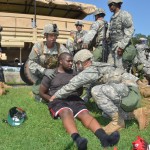