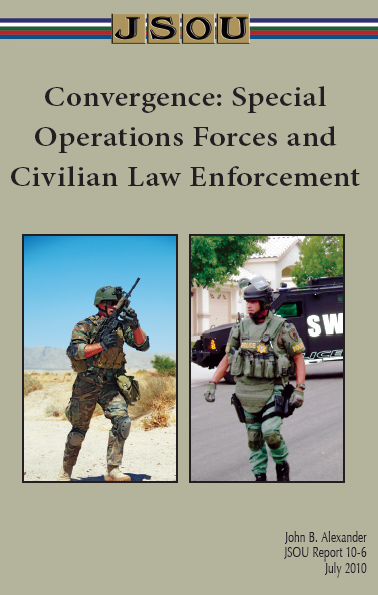 In addition, the dangers faced by civilian LEAs in the U.S. have been constantly escalating. Many criminals are equipped with fully automatic weapons and in some areas conducting small-unit operations. The response to these threats requires additional SOF-like civilian units within LEAs. As such, SOF and LEAs will be competing for personnel from a limited subset of the American population.

The purpose of this monograph is to examine the elements precipitating this circumstance, provide SOF with a better understanding of changing domestic threats and operational capabilities of LEAs, and draw insights from the similarities and challenges imposed by transnational gangs and terrorists both domestically and abroad. The monograph will argue that SOF need new skills and training to assume the law-enforcement-like missions they are being assigned. In addition, it will provide leaders of major LEAs a better understanding of special operations and potentially facilitate a basis for future cooperation and mutual support. The monograph is written as a forward-looking document and a harbinger of emerging trends; some are quite clear, and others more subtle, but all worth contemplating, especially by those engaged in planning for the future of SOF. It is also argued that the public attitude toward conflict is changing and perhaps the legal underpinnings on use of force as well.

An important issue surfaced while conducting interviews with special operations personnel from various elements concerning assigned missions. That topic was how many of them reported being asked to conduct functions in Iraq that were very similar to those found in U.S. civilian law enforcement. These assignments were found at various operational levels from those involved in direct action and capture of high-value targets to liaison with Iraqi law enforcement at varying levels of headquarters. It is noted some officers believe such tasks and constraints to be inappropriate for SOF; however, that discussion is not relevant to this monograph. The missions have occurred, are ongoing, and likely to represent a trend for the future. Those SOF having been assigned law enforcement-like missions were asked about any police techniques training they had received prior to arrival in country; they usually responded that they had none. A few, mostly from the reserve components, were civilian law enforcement officers recalled to active duty and had been trained through police academies. The majority of respondents, however, indicated they had learned on the job. It is only because SOF are inherently adaptive and innovative that they were able to perform as well as they did.

The military aspect of this trend was also noted in a U.S. Marine Corps War College student paper in 2008. Both authors—Alan Ivy, a supervisory special agent in the FBI, and COL Ken Hurst, a Special Forces commander—had extensive experience in Iraq and encountered these situations. In their paper they correctly asserted:

The merging of law enforcement and combat operations is producing a fundamental change in how the Department of Defense (DoD) is conducting combat operations. The global war on terrorism (GWOT) is forcing combat soldiers to collect evidence and preserve combat objectives as crime scenes in order to prevent captured enemy forces from returning to the field of battle. The military has been slow to codify the doctrinal and equipment changes that support the incorporation of law enforcement techniques and procedures into military operations.