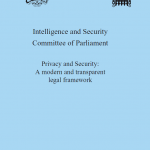 The leak by Edward Snowden of stolen intelligence material in June 2013 led to allegations regarding the UK Agencies’ use of intrusive capabilities – in particular those relating to GCHQ’s interception of internet communications. This Committee investigated the most serious of those allegations – that GCHQ were circumventing UK law – in July 2013. We concluded that that allegation was unfounded. However, we considered that a more in-depth Inquiry into the full range of the Agencies’ intrusive capabilities was required – not just in terms of how they are used and the scale of that use, but also the degree to which they intrude on privacy and the extent to which existing legislation adequately defines and constrains these capabilities. 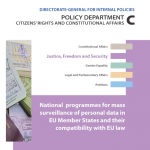 In the wake of the disclosures surrounding PRISM and other US surveillance programmes, this study makes an assessment of the large-scale surveillance practices by a selection of EU member states: the UK, Sweden, France, Germany and the Netherlands. Given the large-scale nature of surveillance practices at stake, which represent a reconfiguration of traditional intelligence gathering, the study contends that an analysis of European surveillance programmes cannot be reduced to a question of balance between data protection versus national security, but has to be framed in terms of collective freedoms and democracy. It finds that four of the five EU member states selected for in-depth examination are engaging in some form of large-scale interception and surveillance of communication data, and identifies parallels and discrepancies between these programmes and the NSA-run operations. The study argues that these surveillance programmes do not stand outside the realm of EU intervention but can be engaged from an EU law perspective via (i) an understanding of national security in a democratic rule of law framework where fundamental human rights standards and judicial oversight constitute key standards; (ii) the risks presented to the internal security of the Union as a whole as well as the privacy of EU citizens as data owners, and (iii) the potential spillover into the activities and responsibilities of EU agencies. The study then presents a set of policy recommendations to the European Parliament.