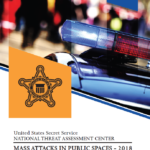 This report is NTAC’s second analysis of mass attacks that were carried out in public spaces, and it builds upon Mass Attacks in Public Spaces – 2017 (MAPS-2017). In MAPS-2017, NTAC found that attackers from that year were most frequently motivated by grievances related to their workplace or a domestic issue.  All of the attackers had recently experienced at least one significant stressor, and most had experienced financial instability. Over three-quarters of the attackers had made threatening or concerning communications, and a similar number had elicited concern from others. Further, most had histories of criminal charges, mental health symptoms, and/or illicit substance use or abuse.