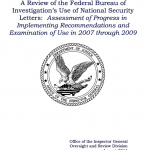 This review is a follow-up to three previous OIG reports concerning the FBI’s use of national security letter authorities. In our first and second NSL reports, issued in March 2007 and March 2008, the OIG found repeated instances of the FBI’s misuse of NSL authorities during 2003 through 2006. During our first NSL review we also discovered the FBI’s practice of issuing exigent letters and using other informal methods to obtain telephone records, instead of using NSLs or other legal process. We addressed these practices in a separate report issued in January 2010.