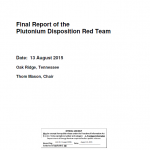 The Plutonium Management and Disposition Agreement (PMDA) calls for the United States and Russia to each dispose of 34 metric tons (MT) of excess weapon-grade plutonium by irradiating it as mixed oxide fuel (MOX), or by any other method that may be agreed by the Parties in writing. The MOX disposition pathway is a realization of the spent fuel standard (SFS) as envisaged in the 1994 National Academy of Sciences (NAS) review that recognized the value of physical, chemical, and radiological barriers to future use of the material in nuclear weapons whether by state or non-state actors. The decision to pursue the MOX pathway using light water reactors in combination with immobilization using a can-in-canister approach was adopted by the United States Department of Energy (DOE) after review of 37 different pathways for disposition in 1997.

A message received from the Project Controls Analyst for the High Flux Isotope Reactor at Oak Ridge National Laboratory (ORNL) on November 3, 2010 requests the removal of a For Official Use Only FBI Weapons of Mass Destruction Directorate Nuclear/Radiological Outreach Briefing which was presented at an event held in September 2010 regarding Test and Research Reactor facilities.