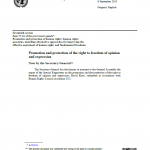 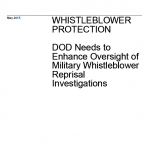 The Department of Defense (DOD) did not meet statutory military whistleblower reprisal 180-day notification requirements in about half of reprisal investigations closed in fiscal year 2013, and DOD’s average investigation time for closed cases in fiscal years 2013 and 2014 was 526 days, almost three times DOD’s internal 180-day requirement. In 2012, GAO made recommendations to improve investigation timeliness, and DOD has taken some actions to address those recommendations. However, based on a random sample of 124 cases, GAO estimated that there was no evidence that DOD sent the required notification letters in about 47 percent of the cases that DOD took longer than 180 days to close in fiscal year 2013. For cases in which DOD sent the required letter, GAO estimated that the median notification time was about 353 days after the servicemember filed the complaint, and on average the letters significantly underestimated the expected investigation completion date. DOD does not have a tool, such as an automated alert, to help ensure compliance with the statutory notification requirement to provide letters by 180 days informing servicemembers about delays in investigations. Without a tool for DOD to ensure that servicemembers receive reliable, accurate, and timely information about their investigations, servicemembers may be discouraged from reporting wrongdoing.

No person will restrict a member of the Armed Services from communicating with a member of Congress; an Inspector General; a member of a DOD audit, inspection, investigation or law enforcement organization; an EO/EEO representative; or anyone in the chain of command. Soldiers will be free from reprisal for making or preparing such communications. No employee or Soldier may take or threaten to take an unfavorable personnel action, or to withhold or threaten to withhold favorable personnel action, in reprisal against any Soldier for making or preparing a protected communication. Personnel Action is defined as any action that affects or has the potential to affect the member’s current position or career. These include promotions; disciplinary or other corrective action; transfer or reassignment; performance evaluation; decision on pay, benefits, awards, or training; referral for a mental health evaluation; or other significant change in duties inconsistent with the member’s rank.

Senior ranking US military leaders have so distorted the truth when communicating with the US Congress and American people in regards to conditions on the ground in Afghanistan that the truth has become unrecognizable. This deception has damaged America’s credibility among both our allies and enemies, severely limiting our ability to reach a political solution to the war in Afghanistan. It has likely cost American taxpayers hundreds of billions of dollars Congress might not otherwise have appropriated had it known the truth, and our senior leaders’ behavior has almost certainly extended the duration of this war. The single greatest penalty our Nation has suffered, however, has been that we have lost the blood, limbs and lives of tens of thousands of American Service Members with little to no gain to our country as a consequence of this deception.

Freedom of expression and the right to receive and impart information and its corollary, freedom of the media, are indispensable for genuine democracy and democratic processes. Through their scrutiny and in the exercise of their watchdog role, the media provide checks and balances to the exercise of authority. The right to freedom of expression and information as well as freedom of the media must be guaranteed in full respect of Article 10 of the European Convention on Human Rights (ETS No. 5, hereinafter “the Convention”). The right to freedom of assembly and association is equally essential for people’s participation in the public debate and their exercise of democratic citizenship, and it must be guaranteed in full respect of Article 11 of the Convention. All Council of Europe member States have undertaken, in Article 1 of the Convention, to “secure to everyone within their jurisdiction the rights and freedoms” protected by the Convention (without any online/offline distinction).