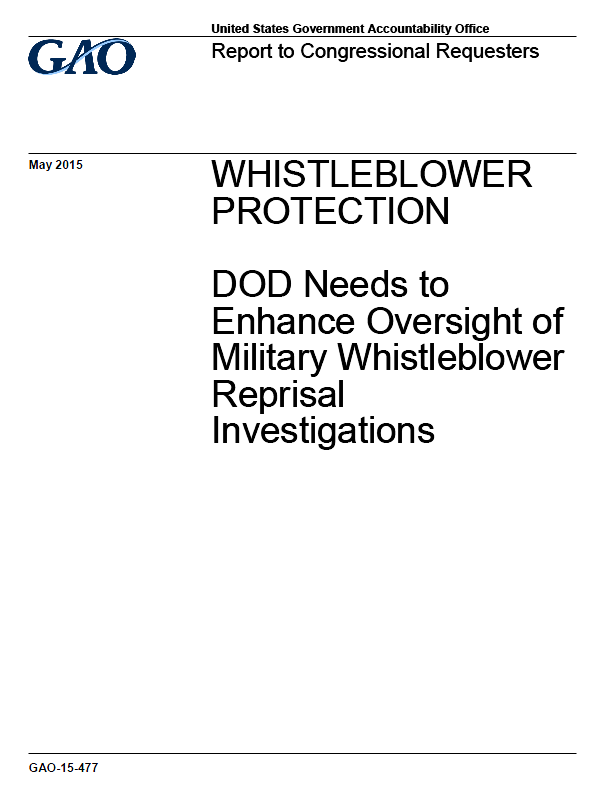 The Department of Defense (DOD) did not meet statutory military whistleblower reprisal 180-day notification requirements in about half of reprisal investigations closed in fiscal year 2013, and DOD’s average investigation time for closed cases in fiscal years 2013 and 2014 was 526 days, almost three times DOD’s internal 180-day requirement. In 2012, GAO made recommendations to improve investigation timeliness, and DOD has taken some actions to address those recommendations. However, based on a random sample of 124 cases, GAO estimated that there was no evidence that DOD sent the required notification letters in about 47 percent of the cases that DOD took longer than 180 days to close in fiscal year 2013. For cases in which DOD sent the required letter, GAO estimated that the median notification time was about 353 days after the servicemember filed the complaint, and on average the letters significantly underestimated the expected investigation completion date. DOD does not have a tool, such as an automated alert, to help ensure compliance with the statutory notification requirement to provide letters by 180 days informing servicemembers about delays in investigations. Without a tool for DOD to ensure that servicemembers receive reliable, accurate, and timely information about their investigations, servicemembers may be discouraged from reporting wrongdoing.

DOD’s Office of Inspector General’s (DODIG) newly developed case management system, which it established to improve monitoring, is separate from the service IGs’ systems, limiting DODIG’s ability to provide oversight of all military reprisal investigations. GAO found that DODIG’s system did not have a record of at least 22 percent of service-conducted reprisal investigations that were closed in fiscal years 2013 and 2014 and investigations open as of September 30, 2014. DODIG officials stated that they plan to expand DODIG’s case management system to the service IGs by the end of fiscal year 2016 to improve DODIG’s visibility over investigations. However, DODIG does not have an implementation plan for the expansion, and service IG officials stated that they have unique requirements that they would like to have incorporated into the system prior to expansion. Expanding the case management system to the service IGs without developing an implementation plan that, among other things, addresses the needs of both DODIG and the service IGs, puts DOD at risk of creating a system that will not strengthen its oversight of reprisal investigations.

According to 10 U.S.C. § 1034 if, during the course of the investigation, the IG determines that it is not possible to submit the report of investigation to the Secretary of Defense and the service Secretary within 180 days after the receipt of the allegation, the IG shall provide to the Secretary of Defense, the service Secretary concerned, and the servicemember making the allegation a notice of that determination including the reasons why the report may not be submitted within that time and an estimate of the time when the report will be submitted. DODIG considers its office to be in accordance with the statute as long as it either completes the investigation within 180 days or submits a letter to the servicemember within 180 days, according to a senior DODIG official. In February 2012, we found that DODIG officials acknowledged that they and the service IGs had not been making the required notifications, but that they were taking steps to ensure that they met statutory notification requirements. For example, in February 2012, DODIG issued policy guidance to the service IGs reemphasizing the statutory requirement to notify servicemembers if investigations are not completed within 180 days.

Further, according to oversight investigators we spoke with, they are to determine whether the service IG sent the 180-day notification letter as part of DODIG’s oversight review of service IG-investigated cases and in fiscal year 2013, it was included as an item on DODIG’s oversight worksheet for oversight investigators to look for during their oversight review. DODIG officials stated that they have taken additional action to ensure they meet statutory notification requirements since fiscal year 2013, which was the time frame covered by our case-file review. Specifically, in fall 2013, DODIG assigned an oversight investigator to periodically reconcile 180-day notification letters with the service IGs to ensure that the service IGs have sent the required letters and that DODIG has received a copy, according to DODIG officials. In addition, DODIG developed a mechanism in its case management system to indicate which cases are older than 180 days. However, DOD officials told us they have not developed a tool, such as an automated alert, to proactively ensure that they are in compliance with the statutory 180-day notification requirement.