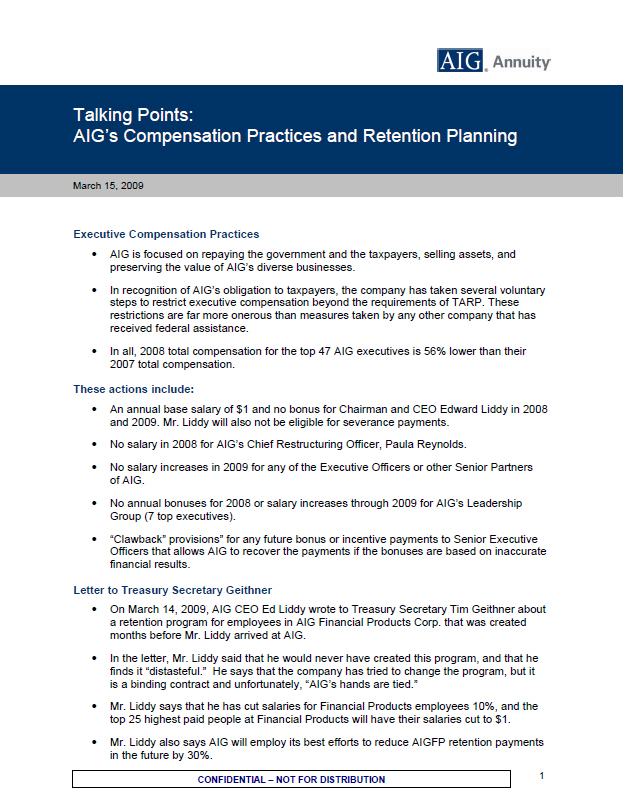 Retention Planning
AIG is completely focused on repaying the UrS govemnment, and making decisions that are in the taxpayers’ best interests. The retention of AIG’s key employees is a critical component in these efforts for several reasons:

The ERP is also a contractual obligation of AlG Financial Products, and the non-deferred portion of the compensation is guaranteed by AlG. Under the legal terms of the plan, AlG cannot change this program
To date, AIG Financial Product’s wind down is being successfully executed, and emmployee departures (excluding layoffs) have been limited.

AIGFP’s Employee Retention Plan (“ERP”) — which was adopted nearly a year ago, in the first quarter of 2008, and disclosed in AlG’s first, second, and third quarter 2008 10Qs — prevents an uncontrolled meltdown of AlGFP, which would put its multi-trillion dollar book of business at significant risk of further loss. This plan helps retain many employees that would otherwise leave AlGFP and join other firms due to large deferred compensation earnings losses, limited 2007 compensation, and uncertain compensation for 2008 and 2009.