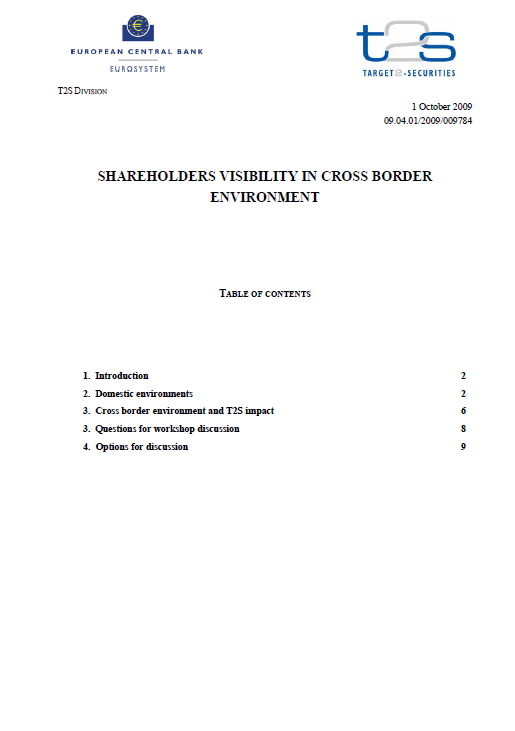 On 11 March 2009 the T2S Team organised a conference for EU issuers, primarily of equity securities. The aim of the event was for the Eurosystem to clarify the scope of T2S and discuss the project’s impact on issuers and their agents.

The most important topic identified in that conference was the need for issuers to be able to identify their shareholders in a cross border environment. It is evident that T2S per se does not create the problem. This is an existing issue where- and whenever cross border transaction activity is present. However, the creation of a single settlement engine for Europe may intensify the issue due to the expected increase in cross border activity associated with T2S and may thus increase the desirability of a harmonised approach.

In order to further explore the topic, the ECB T2S Team, in cooperation with DG–Markt of the European Commission, organised a focused workshop on cross-border shareholder visibility on 14 October 2009. The present discussion note aims only at providing background information and structuring the agenda for discussion at this workshop. It presents the issue and includes some of the ideas proposed so far from issuers themselves as a way forward. These ideas need analysis and consideration from all involved parties before any official course of action is followed. As it stands, it commits neither the T2S Team and the Commission nor issuers and their agents to any proposed measure, policy or strategy.

Issuers are interested in identifying the end-investors in their shares for a number of reasons:

There are a number of different legal structures for holding shares in use across Europe. The process for identifying end-investors depends initially on whether the shares are bearer or registered and, in the case of registered shares, whether they are registered in the name of the end-investor or in the name of a nominee. Unless the end-investor is registered in his own name, his identification requires a process of working back through the holding chain, the so-called chain of intermediaries. Although several EU
member states have a legal framework that gives the issuer the right to effective disclosure by those intervening in the holding chain, there is currently no EU-wide legal obligation. In some member states, banking secrecy rules or contractual provisions may stand in the way of such disclosure. In many other member states, the law remains silent.

A further distinction can be made between systems where information about shareholders is flow-based and those where it is stock-based. In the former case, information about the holders of the securities is constantly updated as a result of transaction in the security; in the latter case an analysis of the holders is provided as a “snapshot” on a particular date, which may be triggered either by a specific event (such as an Annual Meeting) or by a request from the Issuer.

The following sections provide a description of the processes in selected EU countries, namely, the UK, Germany, the Nordic countries, France and the Netherlands. More information on other markets would be welcome although one may expect that other processes elsewhere in Europe are broadly covered by the descriptions herein. However, this assumption remains to be validated.

The UK model provides flow-based information at the level of the legal owner (which in many cases is the end-investor), supplemented by the ability for issuers to track through the chain of ownership. The book entries in Euroclear UK constitute the electronic register, which is constantly updated as settlement takes place. No further intervention from CSD participants is required for registration processes. Euroclear UK provides the details of settled transactions in real time to registrars, who update their mirror register databases. A daily reconciliation is carried out between Euroclear UK and the registrars.

The legal owners who appear on the register may themselves be the end-investors (if they choose to hold shares in their own name) or may be custodian banks or nominee companies, holding the securities on behalf of the end-investor. UK issuers have the right under Section 793 of the Companies Act 2006 (“S793”) to require holders of shares either to confirm that they are themselves the beneficial owner of the shares they hold or to identify the beneficial owner if it is another person or entity. The combination of the ability under S793 to identify the end-investors behind nominee names and the real-time updating of legal ownership information means that UK issuers are able to track changes in the composition of their end-investors with a reasonable degree of confidence.

The German model provides flow-based information at the level of the registered owner (which may be the end-investor), supplemented by the ability for issuers track through the chain of ownership. Settlement and registration in the issuer’s register refer to two different steps. In step 1, settlement takes place in the omnibus accounts of the clients’ intermediaries in Clearstream Banking Frankfurt (“CBF”). In step 2, CBF informs the register, based on information received from the intermediaries, of the identity of shareholders to be registered and de-registered. Thus, CBF coordinates the number of registrations/deregistrations with the number of securities settled on their omnibus accounts. (The beneficial owners information contains legally defined personal data). Only where a client has instructed its bank to act as its nominee (or in the case of proprietary holdings of the bank), will the bank itself appear on the issuer’s register. In the case of nominee registration, the bank is legally required to disclose its client upon the issuer’s request (comparable to S793).

The messages sent through CBF interfaces use ISO 15022 formats.

By law, all resident accounts have to be opened at the level of the CSD in the name of the beneficial owner, i.e. the end investor (also known as direct holding system). Non-residents are allowed to hold shares through omnibus accounts. The accounts can be operated directly by the issuer or delegated to a financial institution who is a CSD participant. [It is not known whether Issuers have the power to look through the omnibus accounts to identify non-resident end-investors.]

Two models exist in France, depending on the type of security:

• with the possibility of nominee position registration under omnibus accounts for non resident positions (individualised positions are of course allowed and encouraged but rarely done by foreign global custodians).

The messages are sent to the issuer by a STP through EF. Proprietary (BRN) and not ISO messages are used during the process. It should be noted that there exist also registered securities that are not circulated on the books of the CSD (nominatif pur) and that are not subject to this process.

Stock-based information is provided when an Issuer sends a request for shareholder identification to the CSD (EF). EF forwards the request to its participants (intermediaries) with holdings in the relevant ISIN. Each intermediary provides detailed identification of all shareholders as maintained in its books with the quantity of shares held in the relevant ISIN. Thus identification is at the level of the beneficial owner for French resident holdings and the holder of omnibus account, designated as registered intermediary (nominee or trust etc) when non-French resident holdings are concerned. It should be noted that some intermediaries holding omnibus accounts provide the details of their clients holding through such account in order to facilitate the identification process.

Issuers can further investigate omnibus accounts holdings using either the TPI (Titres au porteur identifiable) 2nd level as proposed by EF1 or using the provisions of the French Commercial Codes that stipulates that the registered intermediary is bound to communicate information on request of issuer. Enforceability of these possibilities remains an issue.

A stock-based system of shareholder identification at the time of a company’s General Meeting is being introduced in the Netherlands in 2010.

Legislation has been introduced in the Netherlands to take effect at the start of 2010. Up to 60 days before its General Meeting, an issuer will be entitled to obtain information from any intermediary on the names and addresses of its shareholders in the books of that intermediary. This information must be provided within two days.

Euroclear Nederlands has proposed that it could fulfil the role of central processor of issuer services in the Netherlands.

Thus it can be seen that at least in the UK, Germany, France, and the Netherlands legislation enables issuers to request from intermediaries disclosure of underlying shareholders (end investors) which goes beyond the aggregate holdings normally maintained at CSD level. However, the enforceability of such disclosure obligations varies across markets. Furthermore, the process for disclosure is paper based, non STP and very costly for issuers, intermediaries and CSDs.

Increased cross-border investment and trading has been a long-term trend. The chart below shows that in a selection of European countries the percentage of non-resident shareholders in listed companies grew between 1999 and 2007; in two countries there was a small reduction. 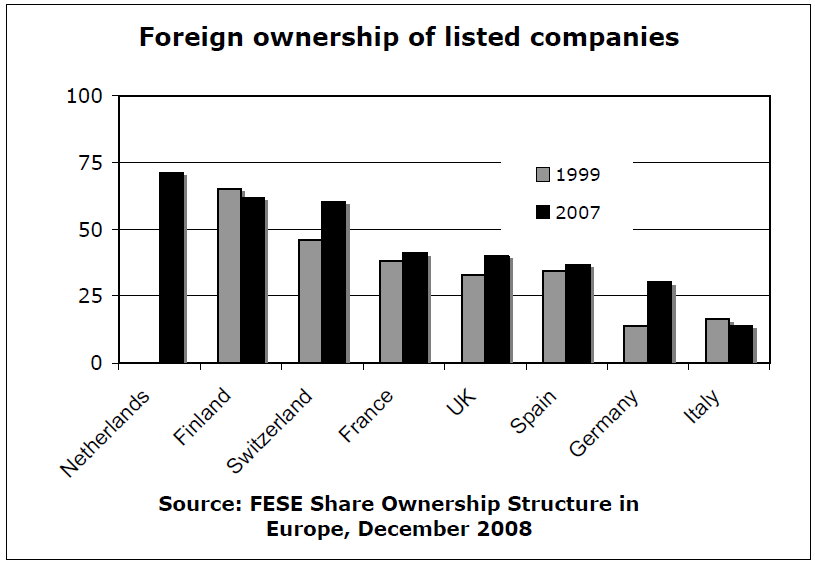