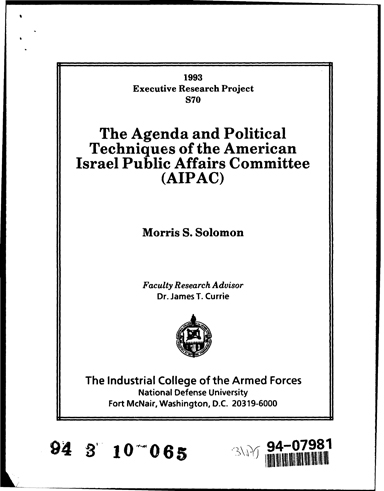 For over three decades the American Israel Public Affairs Committee (AIPAC) has been an effective lobby within Congress to ensure that Israel remains strong militarily and economically, and endures as a national homeland for Jews. While acknowledging its effectiveness, AIPAC critics maintain that AIPAC is an ex-officio arm of the Israeli government which shamelessly manipulates the political process whenever it decides that there is a perceived threat to Israel’s interests. This paper will examine AIPAC’s origins, its structure and agenda. and its lobbying techniques to better understand why AIPAC is considered by many to be the most influential Congressional lobby.

AIPAC traces its roots to 1951 and the establishment of the American Zionist Council (AZC) under the leadership of Isaiah Kenen in concert with nationally known Israeli leaders. AZC’s sole purpose was to foster a pro-Israel lobbying campaign. Structured as a tax exempt organization, the Council could not legally lobby on Israel’s behalf in the United States. Subsequently, in 1954, the AZC became the focus of a possible investigation of alleged illegal lobbying activities on Israel’s behalf. To diffuse charges, the Council formed a non-tax-exempt lobbying arm under Kenen’s leadership called the American Zionist Committee for Public Affairs, the forerunner of AIPAC. In 1959, the word Israel was substituted for Zionist to enlist the support of broad-based Jewish organizations such as the American Jewish Congress, the American Jewish Committee, and the Anti-Defamation League of B’nai Brith. These organizations, which were unable to lobby on Israel’s behalf because of their tax status, played a significant part in AIPAC’s development.  As Kenen stated in his book, Israel’s Defense Line: Her Friends and Foes in Washington: “We enlisted the cooperation of all major Jewish organizations, both ‘Zionist’ and ‘non-Zionist,’ such as the defense organizations. They were unwilling to lobby, but they agreed to find prominent constituents to open congressional doors for us. ”

Since 1959, the American Isracl Public Affairs Committee has been the only domestic organization registered to lobby for the American Jewish community in support of Israel. Unlike other Jewish organizations, donations to AIPAC are not tax exempt. Consequently, AIPAC does not have to abide by Internal Revenue Service restrictions that apply to tax exempt groups, which forbid direct lobbying of Congress and the Executive Branch. Moreover, unlike other domestic organizations that lobby for foreign governments and receive funds from them, AIPAC receives no funding from Israel. Rather, its funding comes from appeals to its thousands of members.

AIPAC is governed by a group of.-eighteen officers, most of whom are leaders of major Jewish organizations. These offices are selected every two years by an executive committee comprising the presidents of thirty-eight major American Jewish organizations that claim a membership of nearly five million. The AIPAC officers meet monthly and only deal with high visibility issues. In reality, the officers are normally wealthy, influential, and widely respected members of the American Jewish community. Likewise, the office of AIPAC president is a titular position. The key position within AIPAC is that of executive director. The executive director is AIPAC’s chief administrative officer who is responsible for the lobby’s day-to-day operations. Kenen occupied the position from 1954-74. He was followed by Morris Amitay, who at his selection was a legislative aide to Connecticut Senator Abraham Ribicoff. Since 1981, the executive director has been Thomas Dine, who monitored national security issues for the Senate Budget Committee and was subsequently a legislative aide to Senators Edward Kennedy, Frank Church, and Edmund Muskie.

AIPAC has a non-sectarian staff of 140 highly intelligent and committed individuals together with an annual budget of approximately $15 million. The largest number of staff is centered several blocks from the Capitol in a non-descript mid-rise building. Even though it lacks identification as AIPAC headquarters, the building is tightly guarded with uniformed officers and remote control entering devices. The remaining staff members are in seven geographical regions around the United States plus an office in Jerusalem.

While one-third of the Washington staff are clerical and administrative, the remaining staff members are specialists in fields ranging from conventional weapon tranfers to advanced weapon systems technology. For example, during an interview conducted on 20 November 1992 with three AIPAC staff members, one was a former academic who specialized in Middle East policy analysis, another was a former United States air force colonel who thoroughly understood the military, and the third was a weapons expert who had previously worked in private industry. Even though one of the three was not Jewish, they were unified by their commitment to the survival of Israel.

AIPAC is extremely effective in using its Congressional influence to defend Israeli interests. In fact, “AIPAC has a near stranglehold over Capitol Hill policies relating to Israel,” stated a former legislative director to a powerful senator. The staffer continued by stating that: “Everyone recognizes that it is in the United States’ interest to support Israel for strategic reasons, but the question is how much aid is sufficient. AIPAC effectively muzzles criticism and precludes any sort of balanced approach.”

This source spoke on a non-attribution basis, a reflection of AIPAC’s power, because she feared that negative comments about AIPAC could jeopardize a possible position in the Clinton Administration. The staffer added that AIPAC often skews the United States’ policy options in the Middle East. For example, if Israeli interests are challenged in the Senate, AIPAC immediately organizes a Senate resolution, sponsored by a pro-Israel senator. Then through its personal and constituent networks, AIPAC secures the support of at least two-thirds of the Senate to forestall any perceived anti-Israeli issues.

AIPAC actively recruits a portion of its staff from political campaigns and from both parties in Congress. AIPAC is keenly aware that House and Senate Members are extremely dependent on their aides to be their “eyes and ears.” Consequently, Congressional aides play an important behind-the-scenes role in researching and presenting the pros and cons of various policy positions to the Members. AIPAC not only knows how the levers of power operate, but AIPAC has maintained and nourished key contacts with pro-Israel Congressional aides. Morris Amitay, a former AIPAC Executive Director, explained AIPAC’s connection to Jewish congressional staffers when he stated:

“There are a lot of guys at the working level up here [Capitol Hill] who happen to be Jewish, who are willing to make a little bit of extra effort and to look at certain issues in terms of their Jewishness, and this is what made things go in the last couple of years. These are all guys who are in a position to make the decisions in these areas for those senators. You don’t need that many to get something done in the Senate. All you need is a certain commitment to get something done and, if guys are willing to put time into that instead of a million other things they have to do, if they’re willing to make a couple of calls, if they’re willing to become involved, you can get an awful lot done just at the staff level..The senators have a million things to do and they’ll take the recommendations [of their aides] most times.

AIPAC views its annual convention differently from typical conventions. AIPAC’s Annual Policy Conference’s objective is to educate its members on political issues affecting Israel and to involve them in actual lobbying. Each spring approximately 2,000 AIPAC members come to Washington to hear Administration and Congressional speakers and to undergo training sessions on topics such as the following:

Making Your Mark With The Media
“Prominent journalists and media observers will show you how to identify anti-Israel bias and respond in pro-active ways.

Responding to Anti-Israel Activities In The U.S.
For 25 years, the anti-Israel campaign has been trying to drive a wedge between the U.S. and Israel. This session suggests countermeasures.

Fighting Isolationism: Forging New Coalitions In Support Of Foreign Aid
The recent resurgence of isolationism threatens foreign aid to Israel. This session focuses on ways to help unite the pro-foreign aid forces in this country.