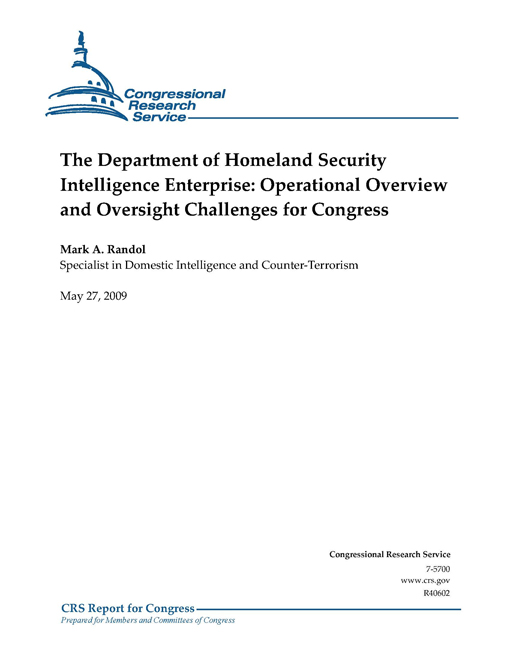 Following a major reorganization of the DHS (called the Second Stage Review, or “2SR”) in July 2005, former Secretary of Homeland Security, Michael Chertoff, established a strengthened Office of Intelligence and Analysis (I&A) and made the Assistant Secretary for Information Analysis (now Under Secretary for Intelligence and Analysis) the Chief Intelligence Officer for the Department. He also tasked I&A with ensuring that intelligence is coordinated, fused, and analyzed within the Department to provide a common operational picture; provide a primary connection between DHS and the IC as a whole; and to act as a primary source of information for state, local, and private sector partners.

As the Obama Administration fills key positions within DHS and I&A, Congress will likely be interested in the progress of integration of the Department’s intelligence components and the quality and relevance of the intelligence DHSI produces for front line law enforcement and security officials who are responsible for protecting America and its people. In addition, this year, the Department will produce its first Quadrennial Homeland Security Review (QHSR), a comprehensive assessment that outlines its long-term strategy and priorities for homeland security and guidance on the Department’s programs, assets, capabilities, budget, policies, and authorities. The results of the QHSR will be particularly important as Congress considers an authorization bill for the Department.

This report provides an overview of DHSI both at headquarters and within the components. It examines how DHSI is organized and supports key departmental activities to include homeland security analysis and threat warning; border security; critical infrastructure protection; and support to, and the sharing of information with, state, local, tribal, and private sector partners. It also discusses several oversight challenges and options that Congress may consider on certain issues. This report may be updated. 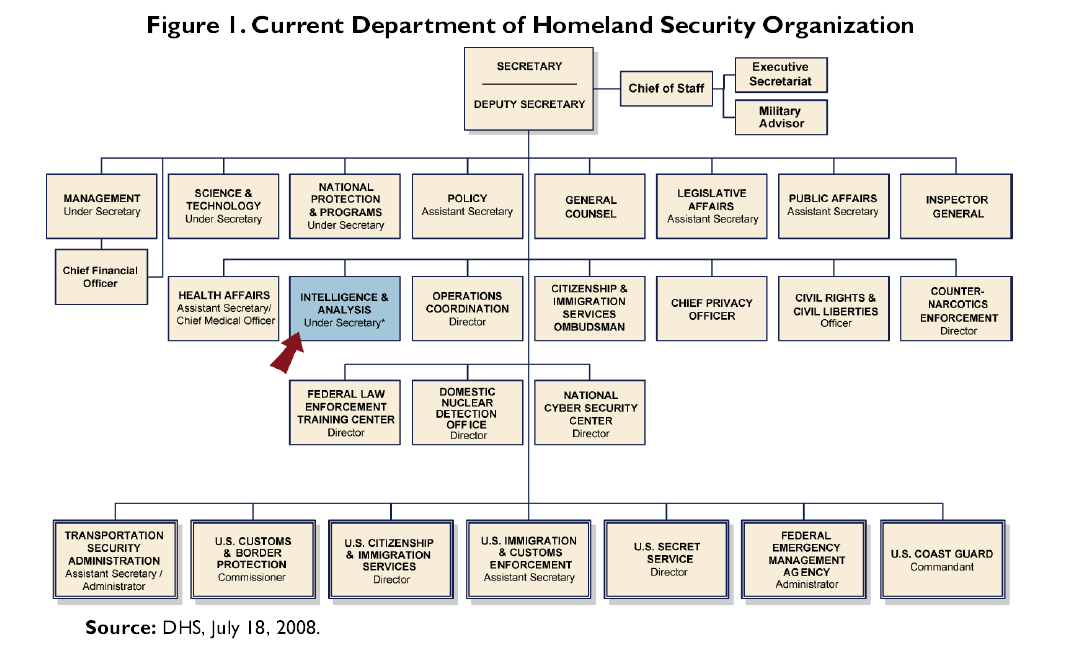 The Homeland Security Intelligence Mission
The mission of I&A is to “ensure that information related to homeland security threats is collected, analyzed, and disseminated to the full spectrum of homeland security customers in the Department, at state, local, and tribal levels, in the private sector, and in the IC.” The Under Secretary for I&A is the Chief Intelligence Officer for the Department and is responsible to lead I&A and the entire DHSI enterprise. The Under Secretary is also the Department’s chief information sharing officer and is responsible for implementing the objectives of the PM-ISE within DHS.

To accomplish its mission, I&A participates in all aspects of the intelligence cycle—“the process by which information is acquired, converted into finished intelligence, and made available to policymakers. Generally the cycle comprises five steps: planning and direction, collection, processing, analysis, and production and dissemination.” It is an iterative process in which collection requirements based on national security threats are developed, and intelligence is collected, analyzed, and disseminated to a broad range of consumers.

“Intelligence, as you know, is not only about spies and satellites. Intelligence is about the thousands and thousands of routine, everyday observations and activities. Surveillance, interactions—each of which may be taken in isolation as not a particularly meaningful piece of information, but when fused together, gives us a sense of the patterns and the flow that really is at the core of what intelligence analysis is all about….”

I&A combines the unique information collected by DHS components as part of their operational activities (e.g., at airports, seaports, and the border) with foreign intelligence from the IC; law enforcement information from Federal, state, local, and tribal sources; private sector data about critical infrastructure and key resources; and information from domestic open sources to develop homeland security intelligence. This encompasses a broad range of homeland security threats. It includes border security information to counter human smuggling and trafficking, cargo data to prevent the introduction of dangerous items, information to protect critical infrastructure against all hazards, information about infectious diseases, and demographic data and other research about ‘violent radicalization.’